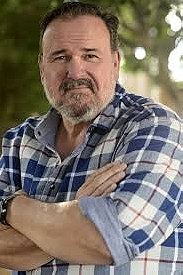 Stephen became an actor in 1984 after 3 years of training at Arts Educational Schools in London; he spent the first 6 months of his career touring round London parks and schools in Robin Hood & The Tree Trick which was quickly followed by his first film role as Moose in the cult film My Beautiful Laundrette.

After a few years working in theatre, commercials and supporting roles on TV he joined the cast of fledgling comedy Birds of a Feather as Dave, the lover of Sharon (Pauline Quirke). He was originally in 2 episodes but made such an impact with the fans that he was bought back for the third series. When he met Peter Richardson in Sarah Stockbridge’s garden Peter asked him if he was available to do a day’s work on The Glam Metal Detectives for the Comic Strip, 1 day became 3 months and he played literally hundreds of characters and in 2012 he was asked back by Peter to be in the 30 year anniversary Comic Strip show "5 go to Rehab"

A year of commercials introduced him to director Peter Chelsom, Peter cast him right away as Gordon in Hear My Song opposite Ned Beatty. Then there were a couple of years getting great roles on British TV, in the likes of "The Hot Dog Wars", Dangerfield and Kavanagh QC and Our Friends in the North opposite Malcolm McDowell and Daniel Craig.

His movie career was moving alongside this at quite a pace with roles opposite Timothy Dalton in The Beautician and the Beast, Robert Englund in The Killer Tongue and Richard Harris in Savage Hearts.

In 1996 his agent set up a meeting on a small low budget movie with an unknown director named Guy Ritchie; Guy offered him the role of Nick the Greek in his movie Lock, Stock and Two Smoking Barrels. Three years later the film was released and became the biggest British movie in the last 20 years and launched the careers of Nick Moran, Vinnie Jones, Guy Ritchie, Jason Statham, and Matthew Vaughn.

Lock, Stock and Two Smoking Barrels led on to more movies and Hollywood started knocking on the door. Alan Parker had him do a small role in Angela's Ashes, Philip Kaufman asked him to play Bouchon in Quills alongside Kate Winslett, Michael Caine, Joaquin Phoenix and Geoffrey Rush. Richard Eyre called on him twice, for Iris opposite Judy Dench and in Complete Female Stage Beauty with Claire Danes. This was followed by the role of Ted Ray in The Greatest Game Ever Played directed by Bill Paxton, Bill had seen his work and after speaking to his agent he called Stephen from his car phone (very Hollywood) and offered him the part. Then the role of Big Mike in Kinky Boots came along.

Alongside a very successful movie career he did several TV series for the USA, Canada and the UK. Starhunter 2300 in which he played Rudolpho De Luna, he played the co-lead in the BBC series Cavegirl. He played Banjo and Broadman in the adaptations of Terry Prachett’s Hogfather and The Colour of Magic for Sky TV, plus the two 20th anniversary episodes of “Casualty” and regular roles in “Kingdom” (with Stephen Fry) and “Larkrise to Candleford”. More recently he has done two films with the Warchowski Brothers – Speed Racer and Ninja Assassin.

He is married to the most beautiful woman in the world, Sarah and he have 2 small dogs, Fry and Ronnie. He has 2 main hobbies, he loves to play golf (at which he is terrible) and he loves American Football, which he used to play and coach.


Stephen played American football in the UK for the BAFL One team Sussex Thunder, and retired at the end of the 2007 season. He was interviewed for Sky Sports Sunday NFL coverage after the Thunder's 2007 fixture at the Ipswich Cardinals. The interview, which was broadcast on 21 October 2007, discussed his acting career, as well as American Football. Marcus has been an offensive line coach at the London Olympians and at Valley Trojans.

2. Rise of the Footsoldier 3