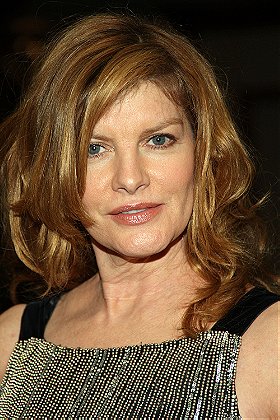 Russo appeared as Frigga, the mother of the titular hero in the superhero films Thor (2011) and Thor: The Dark World (2013). In 2014, Russo co-starred in the crime thriller film Nightcrawler, for which she received critical praise and BAFTA Award for Best Actress in a Supporting Role nomination.[3] She appeared in the comedy The Intern, which was released on September 25, 2015.

Russo, an Italian American, was born in Burbank, California, the daughter of Shirley (n├®e Balocca), a factory worker and barmaid, and Nino Russo, a sculptor and car mechanic who left the family when Rene was two. Russo grew up with her sister, Toni, and their single mother. She attended Burroughs High School (where her classmates included director Ron Howard), but eventually dropped out in the tenth grade. Due to financial constraints within the family, she began taking a variety of part-time jobs including working in an eyeglass factory, and as a movie cashier.

In 1972, the 17 year old was attending a Rolling Stones concert when she was approached by John Crosby, a scout and manager from International Creative Management. He told her she should be a model and had test photos made of her. Within a few months, Rene signed a contract with Ford Modeling Agency and within a year had become a successful print and photographers model. Soon her modeling breakthrough came when she appeared on the cover of Vogue. By 1975, she had appeared on numerous magazine covers, was one of the most successful models in America, and was also starting to be seen in several TV commercials through the 1980s.

By her 30th birthday, demand for her began to dwindle, as it does for most models at that age. She did a few more commercials and then turned her back on modeling and show business for a while. She began to study theater and acting, and began appearing in theater roles at small regional theaters in Los Angeles and elsewhere in California.

Russo made her television series debut in 1987, with a supporting role in the TV series Sable. Two years later, she made her debut in film as the girlfriend of the Tom Berenger character in Major League. Her breakthrough role is generally considered to be her part as internal affairs detective Lorna Cole in Lethal Weapon 3 (and again in Lethal Weapon 4) opposite Mel Gibson.

Throughout the 1990s, Russo appeared in a number of thrillers including In the Line of Fire with Clint Eastwood, Outbreak with Dustin Hoffman, Ransom (directed by high school classmate Howard) and The Thomas Crown Affair. She attained a certain degree of cult status from her performance in Freejack, alongside of Emilio Estevez, Mick Jagger, and Sir Anthony Hopkins.

She also tried her hand at comedy in Tin Cup with Kevin Costner, Get Shorty with John Travolta and as Natasha Fatale in the live-action film version of The Adventures of Rocky and Bullwinkle. She starred in at least one major studio film per year from 1992 to 2002.

Russo more recently co-starred with Al Pacino in Two for the Money and with Dennis Quaid in Yours, Mine and Ours. Russo recently joined the cast of the upcoming film, Thor, in which she will play Frigga, the mother of the titular hero.

Citizen Connor voted for an image 4 months ago

"FriggaŌĆó Frigga was the Queen of Asgard and wife of Odin, mother of Thor, and adoptive mother of Loki.ŌĆó She attempted to keep the peace between the family even when Loki discovered he was the true son of Laufey and became vengeful towards her and her husband.ŌĆó When Thor brought Jane Foster to Asgard to protect her from the powers of the Aether, Frigga took care of her and defended her against the attacking Dark Elves, even sacrificing her life at the hands of Malekith to ensure her safety.Ō"

Psycho-Pirate added this to a list 11 months, 2 weeks ago
Ladies of the MCU Ranked (49 person items)

nopatsjim14 posted a image 1 year ago

nopatsjim14 voted for an image 1 year ago

Agirl voted for an image 1 year, 2 months ago

nitevision voted for an image 1 year, 5 months ago

TrekMedic voted for an image 1 year, 5 months ago

David Roffidal voted for an image 1 year, 7 months ago

skipperbrian voted for an image 1 year, 8 months ago

mychaloh voted for 3 images 2 years ago

darthjoker12 added this to a list 2 years, 1 month ago

skipperbrian voted for an image 2 years, 3 months ago

freewave voted for an image 2 years, 3 months ago

franceseattle added this to a list 2 years, 5 months ago
Fashion Models of the 1970s (31 person items)

emberlin voted for an image 3 years, 3 months ago