Top 10 Movie Cars of All Time

The classic 1968–70 Dodge Charger is a TV and movie superstar. The most famous of all was the '69 Charger "General Lee" from the The Dukes of Hazzard TV show. Another Charger starred in the 1970s cult hit Dirty Mary Crazy Larry. But in 2000, the venerable Charger took to the screen again, this time built as a menacing black street racing machine for Vin Diesel. With a wicked stance, giant rear tires and a humongous engine and supercharger sticking out of the hood, the Charger was insanely cool.

It was the climactic action scene of the movie that made this car so memorable. As Vin Diesel's character Dominic lines up against Paul Walker's character, who's driving a Supra, he floors the throttle and the Charger does a sick wheelstand and burnout at the same time. Movie magic for sure, but still fun to watch. Later in that same race, the two cars jump a set of train tracks just as a locomotive passes, and a heartbeat later Diesel flips the Charger in a spectacular finish to the chase scene. 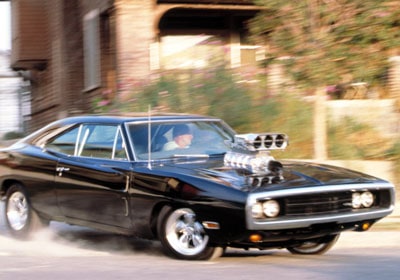 When it comes to cars, Australians are historically just as power-hungry as Americans. So in the 1960s and 1970s, the Australian arms of American car companies created some fairly brutal muscle machines—cars we never saw in the States.

One of them was the Ford Falcon. In its third generation, the Falcon XB GT got its power from a 351-cid V8. But for the movie Mad Max, the filmmakers transformed the already cool Falcon into the "Pursuit Special" or "Interceptor." The crew plastered a new nose on the front end, emblazoned the body with huge flares and tucked seriously fat tires underneath them. The centerpiece was under the hood—or, more precisely, sticking out of it. In the movie, the switch-activated supercharger boosts the power of the interceptor any time Max needed to skedaddle. But, alas, it was only a movie and that supercharger was a fake. 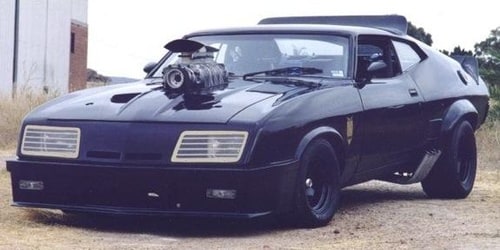 The 1970 Dodge Challenger R/T — especially the Hemi model — was one of the most impressive pony cars to come out of the muscle boom of the late 1960s and early 1970s. And its reputation was cemented with the film Vanishing Point (though the R/Ts in the film were 440-powered). The plot is simple: Kowalski (Barry Newman) bets that he can drive from Denver to San Francisco in less than 15 hours (which would require an average speed of over 80 mph). As you can imagine, there are plenty of great stunts, which were put together by the same team that worked on Bullitt. Kowalski dusts off a Jaguar XKE, launches the Challenger over a gully and does all kinds of other crazy driving.

However, there is one glaring error: In the final crash that destroys the car, the filmmakers used a '67 Camaro rather than a Challenger. In 1997 the movie was remade as a TV movie, starring Viggo Mortensen (clip shown below). 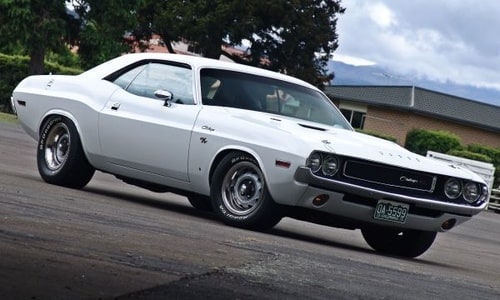 Any vehicle driven, ridden or even stood next to by Steve McQueen was instantly made cooler. But the Highland Green 1968 Ford Mustang GT 390 didn't need much help. The movie's chase scenes on the streets of San Francisco, tailing a 1968 Dodge Charger, are some of the best ever recorded on film. And the stripped-down look of the movie Mustangs made them subtly meaner-looking than regular production 'Stangs. The original magnesium American Racing Torque Thrust wheels give McQueen's car its aggressive stance.

You know that a car has transcended its cult movie status and become an icon when a car company makes a limited edition version twice, as Ford has with the Bullitt Mustang.

Visually, John DeLorean's DMC-12 was a stainless steel stunner designed by the legendary Giorgetto Giugiaro. Under the hood, though the DeLorean wasn't quite the supercar that flashy bodywork promised, carrying a pokey 130-hp 2.9-liter V6. No matter. Its futuristic looks combined with a bit of movie magic gave the DeLorean legendary status, and because it was a time machine in the film, the real-life specs didn't really matter, with one exception: Reportedly, the prop staff replaced that sluggish V6 with a V8 from the Porsche 928, which went a long way toward helping Marty McFly (Michael J. Fox) hit 88 mph, fire up the Flux Capacitor and shoot back to 1955.

Despite its movie celebrity, the DeLorean flopped on the market in the 1980s. But the car's unique, retro-futurist design has earned it a cult following today. There's even a new DeLorean Motor Company restoring and improving the cars. 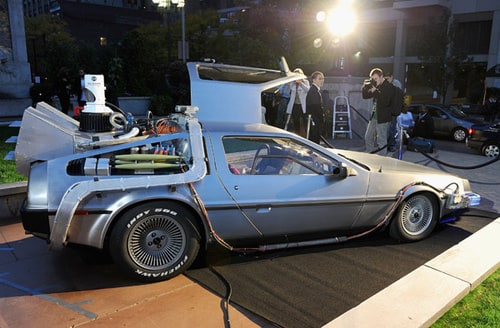 A few years before Star Wars, George Lucas shot American Graffiti, a reflection of his memories of the car culture in California in the 1960s. Besides a cast that included future mega-stars such as Ron Howard, Harrison Ford and Richard Dreyfus, the movie had some great hot rods. But only one has become the most recognized Deuce Coupe in the world.

The brash Canary yellow '32 Ford highboy is powered by a Chevy 327 V8, and sits a little tall in the rear for some seriously cool rake. The climatic drag race on Paradise Road pits Paul Le Mat (John Milner) in the '32 Ford against an equally tough-looking '55 Chevy driven by Bob Falfa (Harrison Ford). The '32 Ford smokes the Chevy off the line, and halfway down the road the Chevy flies off the road, flips and blows. It's an amazing special effects scene, but in reality the same '55 Chevys in this movie would appear (painted flat gray) in another car movie classic, Two Lane Blacktop. 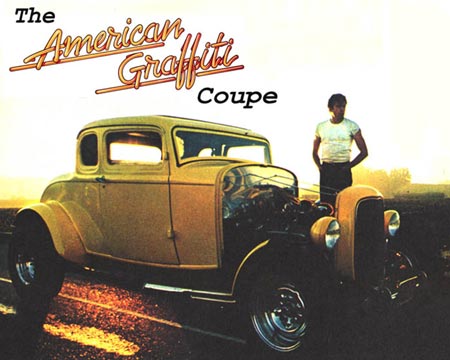 One more Bond car, because it's a classic.

By the 1970s the voluptuous shapes of sports cars from the 1950s and1960s gave way to distinctive and futuristic wedge designs. Pointy cars like the Lancia Stratos and Lamborghini Countach changed the automotive landscape. But neither one of them were ever driven by James Bond.

In The Spy Who Loved Me, the secret agent drove the white Series I Lotus Esprit hard. Yet the moment that sticks in everyone's mind is when the car transforms into a submarine after Bond jumps the car into the water. The Lotus sprouts stabilizer fins and props, and later, it drives up onto the beach as it morphs back into a car — with beachgoers staring slack-jawed. 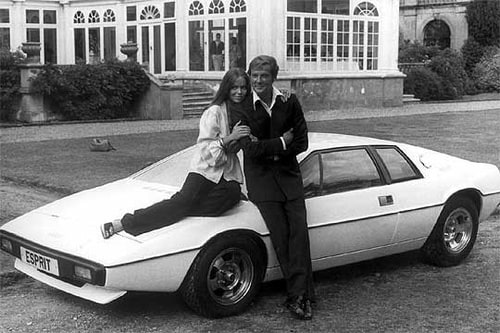 When Smokey and the Bandit director Hal Needham, chose a 1977 Pontiac Trans Am to star in his movie alongside Burt Reynolds and Sally Field, he couldn't have predicted the impact that car would have on America.

The Trans Am actually looked more or less the same for more than a half decade before the film debuted. But that didn't matter. When audiences saw that Trans Am slide around corners, leap over broken bridges and evade Sheriff Buford T. Justice (Jackie Gleason) for hundreds of miles, they wanted a black and gold T/A in their garage. After the movie debuted, sales leapt by about 30,000 cars from 1977 to 1978 and by another 24,000 for 1979. Americans went nuts for the Starlight Black Special Edition paint job, the T-Top roof, and the fact that the car was quicker and better handling than the Corvette of the same generation. It was probably a combination of all three — plus a heaping dollop of Burt's star appeal — that made the Trans Am a legend. 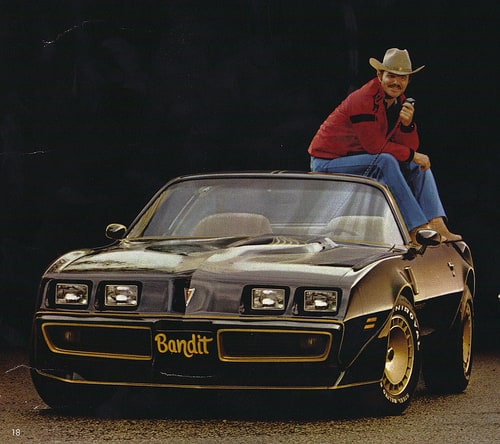 Like Bond cars, Batmobiles, in all their permutations, have transcended generations and remain cool. But the tough, militaristic Batmobile Tumbler that has appeared in Christopher Nolan's Batman Begins and The Dark Knight is the most visually and technically significant Batmobile since the George Barris-designed 1960s version. A beefy 350-cid Chevy V-8 powers the tank-like Tumbler to 60 mph in around 5 seconds, even with 37-inch off-road tires, according to the filmmakers. The front tires are mounted to an independent front suspension with around 30 inches of suspension travel. And the body is said to be made of more then 65 carbon-fiber panels.

What makes the Tumbler cooler than most movie props these days is, simply, that it's a real thing, not a computer-animated fantasy. We certainly dig that. 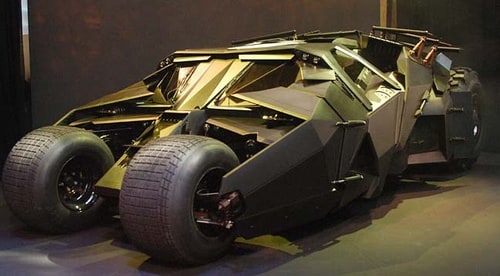 James Bond's legacy of famous cars and far-out gadgets can be traced back from one car — the 1964 Aston Martin DB5 007 driven in Goldfinger and Thunderball. Without any Bond spy modifications, the Aston Martin DB5 is a work of art. But it's the special effects that have made this car quite possibly the most beloved movie car of all time. The long list of cool tricks included ram bumper, machine guns, ejector seat, smoke screen, oil-slick sprayer and more. Looking back on the Aston from today's perspective, the most interesting feature may be the map screen in Bond's car, which foreshadowed today's navigation systems.

So just how influential and significant is the original Bond car? One of the few Astons used in those movies sold last year for a whopping $4.6 million. 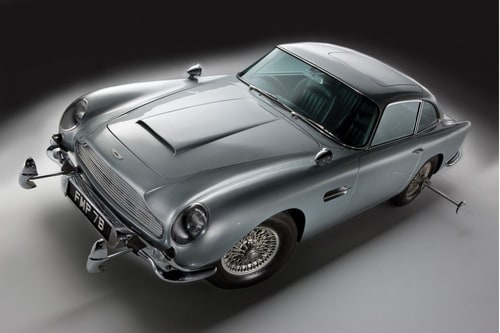 When a vehicle eclipses the flesh-and-bone actors and becomes the superstar of a film—that's when it's a great movie car. There are dozens of memorable cars in film, but to crack the top 10, a vehicle must influence a generation, inspire car culture, and become the stuff of every kid's dreams. These are our favorites, in no particular order.

hair - long vs. short by emejzing

Snow In Autumn by Milena

Women In Suits by Ocifer

"seriously?" she thought 11 by coffee-boy

Covers with Madonna by emberlin

My Favorite Christmas Movies by jay-jay

My Favorite TV Shows Past & Present by jay-jay