This has been a tradition for several years, so why break precedent? Here we have my pick of the Top 10 manly movies for the year 2019. Top 10 lists are becoming increasingly ostracised, as there is always the cry of "Why not this movie" and "Why pick THAT one?" The reason for my picks is simple: It's my f**king list. Go make your own if you disagree. Before you ask, I didn't like Once Upon a Time in Hollywood, and I haven't seen The Irishman. Anyway, onwards and upwards - enjoy the list!
Sort by: Showing 10 items
Decade: Rating: List Type: 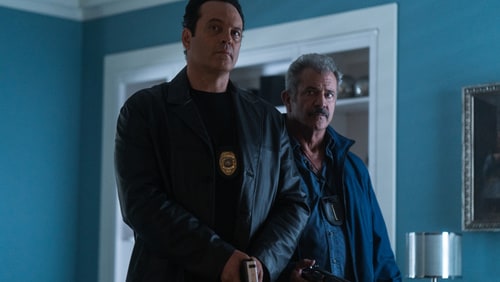 Once again, out-of-left-field prodigy S. Craig Zahler hath delivered, though was there really any doubt after the astonishing one-two punch of Bone Tomahawk and the even better Brawl in Cell Block 99? Gentlemen, Dragged Across Concrete is another exercise in engrossing prolonged character interaction and drama, broken up by beats of insane ultraviolence that will have you wincing. Zahler has a unique voice, and he sticks to it for his third outing as writer-director; deliberate yet mesmerising pacing, uniquely poetic dialogue, a restrained cinematic style, and a killer soundtrack. It's gorgeously shot, with the action frequently unfolding in extended full shots, and an editor who doesn't necessitate a cut every 0.5 seconds. And just look at that cast - Mel Gibson, Vince Vaughn, Michael Jai White, Don Johnson and Udo Kier. As per his previous films, Zahler also refuses to adhere to political correctness. Gibson's character actually states that he doesn't do political correctness, and that's reflected in the finished movie; characters are allowed to speak in hilariously crude ways, which will make this a tough proposition for the easily offended. Bantering is frequent and side-splitting, yet the dialogue never sounds forced, nor does it seem like Zahler is trying too hard to be funny - it all feels organic. And Zahler isn't sentimental towards his characters - just like auteurs such as Quentin Tarantino, the director isn't afraid to kill off familiar faces. As a result, it's hard to take your eyes away from the screen. This is a heart-stopping 158 minutes.

Mean, violent, funny and utterly engrossing, Dragged Across Concrete is an instant manly classic that deserves a spot on your Blu-ray shelf. It definitely doesn't feel its length. 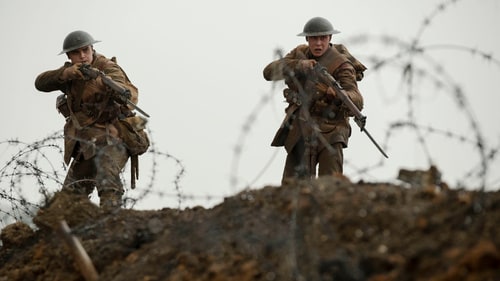 And now for something completely different... a World War I movie. Military cinema is something I personally gravitate towards, and 1917 is a superb addition to the genre - it's a technical masterpiece from top to bottom, thanks to the virtuoso cinematography courtesy of the Oscar-winning Roger Deakins, as well as Sam Mendes' focused direction, which ensures the frame is always filled with something interesting. The little dialogue exchanges, as well as the tense movements through enemy-occupied territory, are riveting, and some moments made me genuinely leap out of my skin without feeling like cheap jump-scares. Additionally, whereas Christopher Nolan's studiously overrated Dunkirk sanitised WWII into a PG-13 container, Mendes doesn't hold back in his depiction of battlefield violence and colourful dialogue. 1917 feels wholly authentic with an R rating in place, and never feels like it's pulling punches. This is a great manly movie, and a great movie in general. 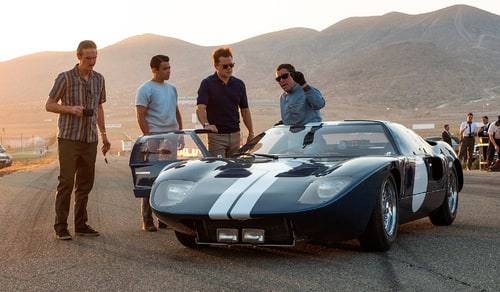 Changing gears (heh), we have director James Mangold's Ford v. Ferrari, which is an old-fashioned historical drama that should appeal to blokes from all walks of life. Mangold's latest movie zeroes in on the events leading up to, and the events of, Le Mans '66; an arduous 24-hour racing event which highlighted the rivalry between Ford and Ferrari. The racing sequences throughout Ford v. Ferrari are spectacular, allowing you to feel the fury of these powerful engines, and experience the terrifying thrill of being behind the wheel of one of those cars. It's the tangible feeling which elevates said racing sequences, as it doesn't look as if anything was filmed on sound stages or with green-screens. Added to this, we have Christian Bale and Matt Damon at the centre of the movie, and boy, are they superb. This is arguably Bale's finest hour, able to embrace a dirty cockney accent and earn laughs almost effortlessly. Entertaining, beautifully made, funny, sometimes touching, and above all edifying, this is a great film and a terrific manly movie. 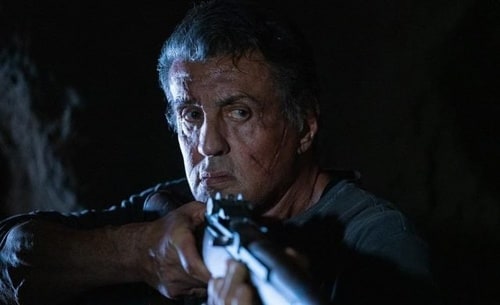 After years of stopping and starting, we finally have a fifth Rambo movie, eleven years after the previous instalment. Despite the odds being stacked against him, co-writer/star Sylvester Stallone manages to do the impossible, cooking up a new story which meaningfully contributes to John Rambo's character arc and delivers the type of balls-to-the-wall, vicious mayhem that fans attend these motion pictures to witness. Rambo: Last Blood is a different type of Rambo movie, more solemn and character-focused, to the extent that some believe this should not be part of the series at all. However, with the weight of Rambo's history behind it, the material has more significance and context. Directed by newcomer Adrian Grunberg (Get the Gringo), perhaps the most refreshing thing about Last Blood is its unwillingness to force a political agenda or subscribe to ever-changing standards of political correctness, making it feel like a nasty, old-fashioned, manly revenge picture from the 1970s. The story is about Rambo trying to protect those closest to him, particularly women, which is a distinctly masculine trait. And when Rambo cuts loose and starts perpetrating violence, the results are simply spectacular - he relentlessly attacks people during interrogations, and terminates cartel members with extreme prejudice during the gore-soaked climax. I was shook when the end credits started to roll, in all the right ways. I was content. I was satisfied. And I couldn't wait to watch it again. 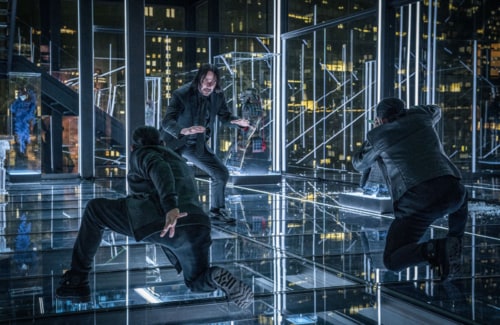 What an unexpectedly great year for masculine entertainment! The John Wick movies are a staple of my annual manliest movies lists, and Chapter 3 confidently continues the tradition. The inherent issue facing any new instalment of this action franchise is the need to keep things fresh, as there is only so many times you can watch a shootout without boredom setting in. However, Chapter 3 has a few tricks up its sleeve, showing nonstop creativity in the action sequences - horses and dogs are thrown in to spice things up, while the climax revolves around eliminating soldiers with heavy armour that cannot be penetrated by regular bullets. So, yeah, it's a total gas, and it remains gleefully masculine - there's profanity, heaps of action, and brutal bloodshed. Keanu Reeves is as great as ever playing the titular character (the role he was born to play), and Chapter 3 sufficiently expounds upon the rich mythology of the franchise while introducing some terrific new actors to the ensemble.

Sign me up for the forthcoming John Wick: Chapter 4. It has been a real pleasure following each new sequel through the development and production phase, and it's encouraging that I still have at least one more instalment to look forward to. 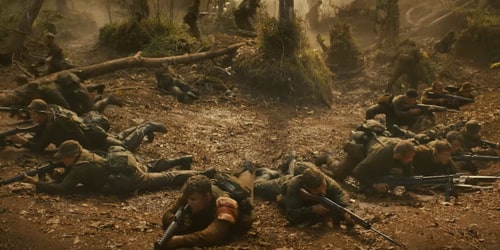 And from Australia, we have the mid-budget Vietnam War movie Danger Close: The Battle of Long Tan, which sees the notorious (and oft-studied) titular battle finally being translated into a big-screen blockbuster. Despite its Aussie origins, the filmmakers definitely spent a few bucks on this one, as the production values are astonishing - the period recreation is spot-on, the combat scenes are up there with the best, and it never feels hampered by budget restraints. War movies are a manly staple, and Danger Close is worthy of its successors; the violence is hard-hitting, there's a strong theme of mateship, and the soldiers act like real men. Admittedly, there are a bit too many (fictional) scenes of characters standing up to their superiors, but that's not enough to tarnish an otherwise solid, moving war picture. 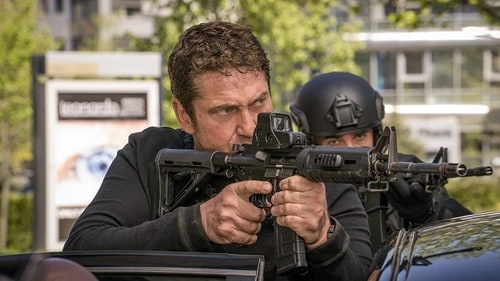 The ...Has Fallen franchise has long been a fixture of my annual manliest movies lists, and thankfully this third instalment continues the tradition. Toning down the over-the-top jingoism of the prior movies, this is a more character-driven action movie, and it's a bit more grounded to boot...while still delivering some badass action scenes. Indeed, the extended climax features some brutal, vicious action sequences with a high body count, and the dialogue is littered with profanity, which always makes for an awesome masculine action movie. Gerard Butler remains a top leading man, and he gets fine support from manly man Nick Nolte, as well as the always reliable Danny Huston. The movie was also overseen by manly movie luminary Ric Roman Waugh (Felon, Shot Caller). Angel Has Fallen is the best in the franchise, and though that might seem like faint praise, it's a fine achievement in my books. This is one for the Blu-ray shelf. 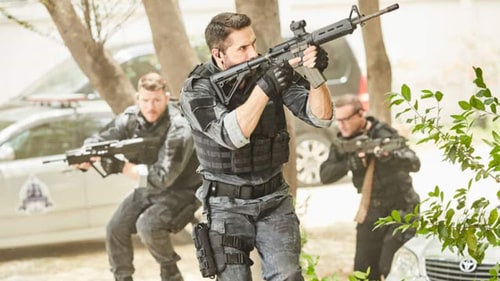 Triple Threat immediately grabbed the attention of all self-respecting manly movie fans due to that freaking cast: It has Tony Jaa, Iko Uwais, Scott Adkins and Michael Jai White, and there's also Tiger Hu Chen to boot. The resulting movie gleefully takes advantage of the martial arts skills of its lead actors, as Triple Threat is full of fisticuffs, while director Jesse V. Johnson also stages enough gunplay to create enough variety to prevent the movie from feeling stale or repetitive. This is a lean 90-minute actioner to boot, without any superfluous narrative flab to weigh it down. The movie delivers in spades; it's excessively violent, there's profanity to add colour to the dialogue, and there's a nice-looking female as well. Added to this, the modest budget is rarely obvious, as Triple Threat is slick and competent. I had a blast watching this.

Dolemite Is My Name 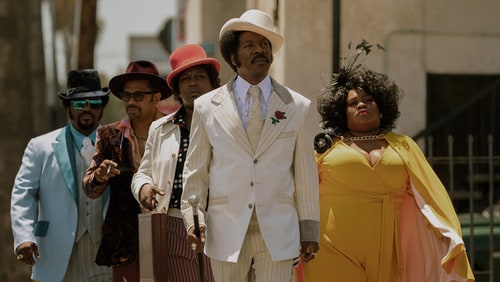 Another potentially strange but nevertheless deserving choice, Dolemite Is My Name announces Netflix is here to stay when it comes to producing excellent, award-worthy motion pictures. In the same mould as films like Ed Wood and The Disaster Artist, this is a terrific true story about how Rudy Ray Moore went from failed comic to a big-screen superstar who is still fondly remembered to this day. And like all the best biopics, Dolemite Is My Name zeroes in on a specific time in Moore's life, ensuring that every major and minor event is given sufficient narrative breathing room. Indeed, I'm glad screenwriters Scott Alexander and Larry Karaszewski avoided a biopic amounting to a "greatest hits" compilation covering Moore's entire life. I'm also glad that the film is so good-humoured, while simultaneously giving the story sufficient gravitas. The actors are superb, with Eddie Murphy doing his finest work in years, while the likes of Craig Robinson and Wesley Snipes add further colour to the ensemble. This is a funny movie, but it's respectful of Moore to boot - it celebrates his achievements (and believe me, he deserves the plaudits) without ever mocking him. This is a good, old-fashioned manly movie which will appeal to the target demographic as well as general audiences. It's on Netflix, so I recommend giving up two hours of your time to check it out. It's worth it. 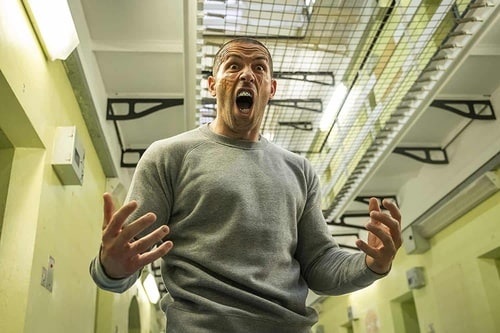 And finally, something a liiiiittle bit more run-of-the-mill. Avengement is not a moving true story, nor is it groundbreaking or even overly innovative, as the story is very standard-order. But it's the execution that allows this one to soar, as Avengement is loaded with brutal, bone-breaking action sequences that put conventional Hollywood pap to shame. Scott Adkins once again demonstrates that he's one of the most valuable action stars currently in the business, as his superb fighting expertise is so refreshing in a cinematic climate normally dominated by big-budget, CGI-laden affairs. Adkins is also unafraid of unflattering roles, as his role of Cain Burgess is deliberately scarred and unattractive, and he commits to it 110%. There isn't much else to say about this one - it's thrilling, exciting, satisfying, violent, and Adkins is the freaking bomb. (Ip Man 4 with Adkins is great as well, just FYI, and you should totally check that one out - I just didn't have space on this list to include it.)

Favorite Movies of 2018 by AVPGuyver21

Directed By: Antoine Fuqua by The Cinephile

Essential movies for a student of philosophy by Nusch