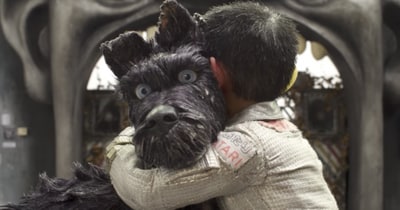 Notes: Since I really loved 'Fantastic Mr. Fox', of course, I was really eager to watch this new stop-motion animated feature from Wes Anderson. And, indeed, I wasn't disappointed and I just really loved the damned thing. First of all, it was such a well made animated feature and the amount of neat details displayed on each screen was just impressive. Furthermore, it was just a really fun adventure with some hilarious dialogue with the typical dry humor we are used to get with West Anderson. On top of that, there was also some room for some more sensitive moments but these scenes never clashed with the rest of the movie. The only critic I could find was that the 'human' characters could have been more developed and the dogs, who were all pretty awesome, were not much developed either because there were so many of them but it wasn't a big deal. Eventually, Wes Anderson displayed once again that he is easily one of the most interesting American directors at work nowadays and I will definitely watch his next director effort.
johanlefourbe's rating: 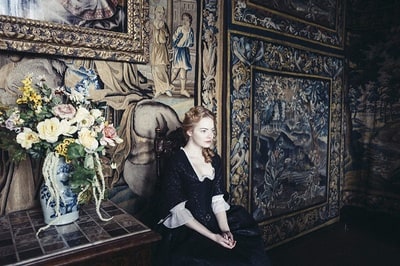 Notes: Usually, I'm not a huge fan of costume-dramas but since this movie had received some great reviews, I thought it would be a rather safe choice. Well, it didn't disappoint and I would go as far as saying that it is one of the best movies I have seen in this genre. First of all, Yorgos Lanthimos delivered here a gorgeous movie shot on location with natural lights. Then, the cast was really strong, especially the 3 main actresses (Olivia Colman, Rachel Weisz, Emma Stone). Finally, it turned out to be such a fascinating tale, sometimes quite hilarious, with many layers and some complex characters. Indeed, each time you think you have figured out one of these women, they would come up with something rather unexpected making them even more interesting than they already were. Of course, you might argue that it was much more straightforward than Lanthimos's previous work such as 'Kynodontas' or 'The Lobster' but it was more accessible and, above all, much more entertaining, at least for me.
johanlefourbe's rating: 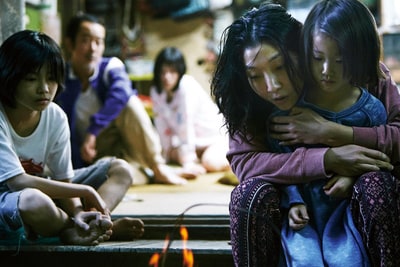 Notes: Apparently, Hirokazu Koreeda has the reputation of being the greatest humanist director at work nowadays and, after watching this movie, it is pretty easy to understand why. Basically, this time around, Koreeda focused on a group of people who has all been rejected and pretty much forgotten by the common society and who are now living in a marginal lifestyle with its own rules and moral code. Koreeda’s masterstroke was that he never judges or praises the characters and, for the first 90 minutes, you see how they cope living completely in the margin of our society. So, it was already quite interesting with some complex 3 dimensional character but, during the last act, they managed to push the whole concept even further. Basically, after a tragic even which was doomed to happen at some point, they completely get sucked back into our world and it all became seriously heart-breaking and even more powerful than it already was. Eventually, following ‘Like Father, Like Son’, this movie was even stronger argument from Koreeda that the strongest bond between the members in a family is not blood but love.
johanlefourbe's rating: 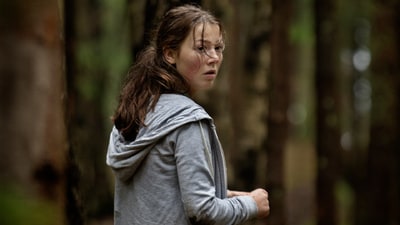 Notes: Eventually, the greatest success of this movie was to show not only that the guy shot more 170 people but, above all, the impact on the 300 remaining survivors would be psychologically traumatised maybe forever. Indeed, for more than an hour, they have nowhere to hide, they have no idea about what is really going on, who is attacking them and why, and if someone will finally show up to stop this nightmare. In the mean time, the shooting keeps going on and they do see other survivors running around scared shitless and they hear people screaming so it was a real nightmare and that's why the one-take gimmick really worked. Indeed, this way, there was no break to allow the viewers to breath for a moment and, this way, not only you're on the first line but you get eventually completely sucked in this tragedy. Anyway, to conclude, the whole thing was just really heartbreaking and terrifying at same time.
johanlefourbe's rating: 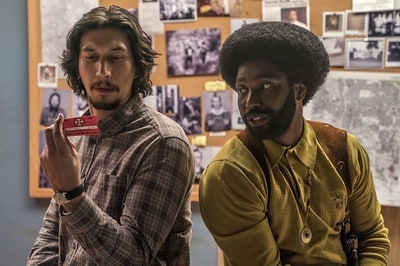 Notes: I have always been a big fan of Spike Lee but, to honest, it had been years since the guy made something really amazing. Fortunately, he made an impressive comeback with this movie. Indeed, it worked on so many levels. It was a fun and entertaining police thriller, a sometimes hilarious satire and it also had a powerful message and it is so rare to find a movie managing to mix so many tones and doing it so well. The main character, very well played by John David Washington (yes, the son of Denzel Washington), was also complex and interesting showing some genuine internal conflict between his loyalty to his black folks but also towards his colleagues and his work as a cop. Eventually, in my opinion, the main core was to show that racism in general and the Ku Klux Klan in particular are basically based on ignorance because, at the end of day, it is ridiculous to argue that the color of your skin should make you a better or a worse person. To conclude, it was a really entertaining and powerful movie.
johanlefourbe's rating: 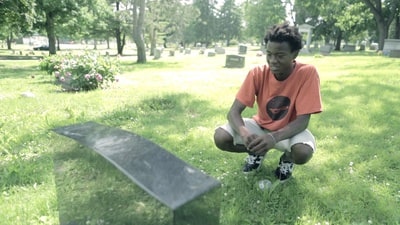 Notes: What I liked the most about this movie was that there were just so many interesting layers. First of all, even though you might feel nothing about skateboarding, you'll have to admit that there was something quite spellbinding about watching these guys dashing through such a ugly urban landscape doing some incredible tricks. Indeed, in such a socially and economically deprived environment, they still found a way to push themselves creatively, honing their skills through hours of training, delivering something artistic while their relatives completely ignored them. But, of course, the whole thing went just way beyond skating. It was also an intimate look on these skaters and the fact that the director was one of them was something that you rarely get to see since, most of the time, a documentary maker is basically an outsider. As a result, the whole thing was just as much about Bing Liu himself than about his two friends. Concerning his buddies, it did help that they were both really charismatic. Eventually, as far as I was concerned, I was mostly intrigued by the way he handled Zack. Basically, the guy was/is one of his best friends but also a destructive loose cannon who happened to be also abusive with his girlfriend, something Bing Liu clearly struggled to deal with, especially with his own past as a victim of domestic violence. Anyway, I could go on forever, basically, it was a really strong documentary.
johanlefourbe's rating:

Notes: I really loved the damned thing and it turned out to be the best horror film I have seen for a very long time, no less than that. To be honest, it is definitely a slow-burn movie and, if you would expect a standard horror flick, you would be disappointed since at least 3/4 is actually a family drama. In fact, many viewers consider this movie as a drama but I can't remember the last time I watched a movie mixing these two genres that worked so well. As a result, the dramatic parts managed to ground the story and the characters and you had more time to get to know and care about them. Still, the last 30 minutes, when the horror part finally really kicked in, were just so unsettling and pretty damned f*cking scary, it was just an awesome way to conclude this tale. Sure, you could argue that the outcome was after all rather predictable but it worked just fine for me. On top of that, I just loved that, even though some stuff was explained, they didn't chew out everything freaking details and the fact that some of it remained mysterious made the whole thing even more spellbinding to behold. And, of course, Toni Collette displayed once again that she is a terribly underrated character actress as she delivered here another really strong performance.
johanlefourbe's rating: 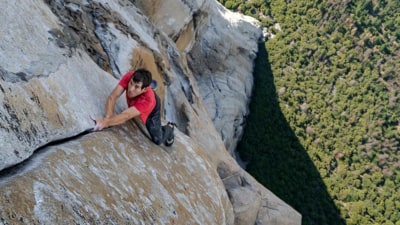 Notes: Even if I suffer from vertigo or maybe because I suffer from vertigo, I have always been fascinated by professional climbers and I always had a weak spot about movies dealing with this subject. Well, this movie was easily one of the best I have seen in this genre. Indeed, it is maybe the only film I have seen during which they actually explain how technical it is to climb such a mountain. Basically, when the guy finally goes free-solo, he does it after weeks and weeks of training and to behold this process was just fascinating. Furthermore, in my opinion, you get to understand that the drive of Alex Honnold is not fame or being the best in his field. In my opinion, what drives him is the quest for perfection, and when he finally achieves to climb this rock without a rope, something most people would describe as impossible, he basically has reached perfection and this moment is just exhilarating, mostly for him but also for the viewers. The only critic I might have is that the actual climb of El Capitan was done in only 10 minutes of running time and I wish they did spend more time on this massive achievement but that was a minor issue though.
johanlefourbe's rating: 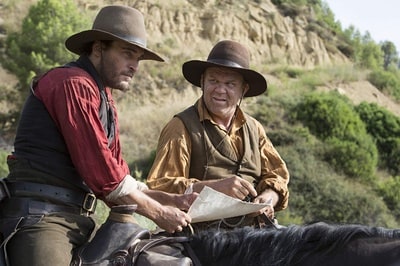 Notes: I wonder how Jacques Audiard ended up making a Western as his first English-speaking feature but what was even more surprising was that it turned out to be one of the best Westerns I have seen in years. Apparently, even though this movie had been very well received, it was still a flop at the box-office but, as far as I was concerned, I really loved the damned thing. The first thing that impressed me was that Audiard had managed to create such a convincing time and place. Then, there was such a top cast involved (John C. Reilly, Joaquin Phoenix, Jake Gyllenhaal, Riz Ahmed) and they all delivered some solid performances. About the plot, I don’t think it really mattered since the whole thing was mostly about the mood and the characters involved. Above all, I just loved the interactions involving Charlie and Eli. Indeed, these characters and their relationship was fairly complex and sometimes actually quite hilarious.
johanlefourbe's rating: 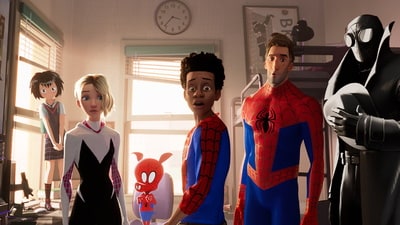 Notes: This movie turned out to be such a nice surprise and the proof that even though we are close to get a super-hero overdose, there is actually still apparently quite some creativity in this genre. Indeed, even if it might not be the best super-hero flick ever made (it wasn’t far from it though), it still managed to become the best Spider-Man flick so far. I’m not surprised that Phil Lord and Christopher Miller were involved as the whole thing turned out to be such a fun wild entertaining ride. On top of that, the animation was just really neat and I wish I had seen it in the movie theatre when it was released because it was visually quite spectacular. Furthermore, this movie displayed that, to move forward with Spider-Man, they shouldn’t keep focusing on only Peter Parker because, after getting 3 young white boys playing pretty much playing exactly the same character, it is getting seriously repetitive and rather boring. With finally giving the lead to Miles Morales, they opened so many doors and, hopefully, the mighty Marvel will notice it and try to tackle some even more original concepts in the future. Finally, it was such a breath of fresh air to see a super-hero flick which wasn’t linked to an intricate cinematic universe.
johanlefourbe's rating: 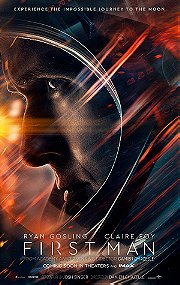 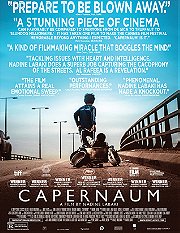 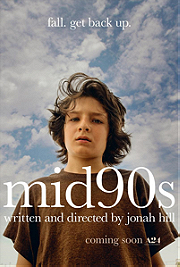 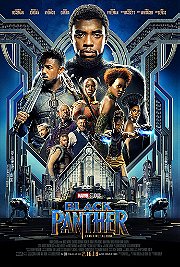 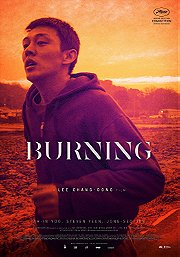 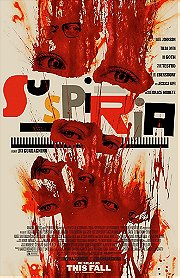 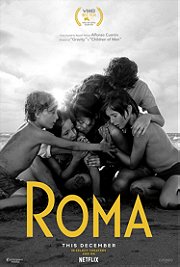 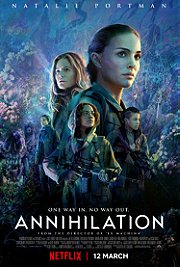 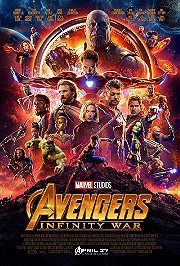 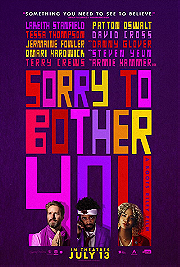 Movies Viewed in 2019 by PvtCaboose91

October 2018 Horrorfest by the giraffe