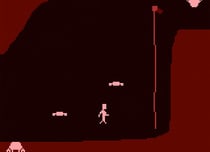 
This game really surprised me. The design is simple and so is the gameplay, but the game is amazing. The two boss fights are very nicely done, and all of the platforming in between is difficult, but not so difficult that you won't be able to overcome it after a few attempts. It's just so good. If you own an Ouya, or plan on getting one, this should be one of the first games that you download.
ape's rating:


Sonic CD is my favorite Sonic game, barely edging out the fan-favorite Sonic the Hedgehog 2. So, it's no surprise that the port placed high on the Ouya list of games. Sonic CD is still a blast to play today, with each level having a few variations thanks to a nifty time-traveling gimmick tossed into the game. It's still fun after all these years, and the $4.00 USD price tag to unlock the full game isn't too shabby of a price, either.
ape's rating:


This is the same Wrestling Revolution that's found on the iPhone and on Android devices...Except this one can be played on the big screen with a controller. It's just as fun, but despite doing away with the touch screen controls, the controls do get out of whack every once and a while. At least once a match, I seem to be leaning the analog stick to the left, and my wrestler walks right instead. It's not game breaking, but it's still annoying. That said, this is the first wrestling game for the Ouya, and even with some of the bugs, this is still a very solid wrestling game well worth getting if you're a Ouya owner and a wrestling fan.
ape's rating:


The Amazing Frog, in its current form (I'm writing this on 8-20-13 - they plan on doing multiple updates as time goes on) is terrible...But terrible in the kind of way that the old Gamera films are terrible - in a good way. Amazing Frog is like of like Pain on the Playstation Network, except you get to walk and roam around instead of getting hurled out of a slingshot. The controls aren't the best, the camera kinda stinks, and yet...I couldn't stop playing. The developers have announced planned updates including the goal of being able to drive around vehicles, so while the game isn't great now (and it's still fun), it should only get better as time goes on.
ape's rating:


DubWars was the game that made me want an Ouya. A friend of mine got one at launch and mentioned this game and I instantly loved the concept. Basically, dub step music plays in the background. The beats of the song are when you shoot. You have no control over your firepower, it's all dependent on the song...If you've got a period with no beats, then you've got no ammo and you've gotta dodge all incoming enemies. It's really quite neat. However, after playing it, I like it a lot, but the awkward-feeling controls hold it back a tad. For a twin-stick shooter, and one that I'm using two analog sticks to play with, the on-screen movements sure aren't smooth. I never really got used to feeling like I was moving in squares rather than circles. But despite the awkward controls, DubWars is still fun and interesting. If they update the controls to be smoother, this could easily become one of my favorite games on the system.
ape's rating: 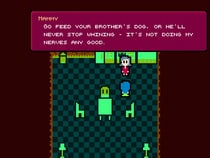 
This game is not suitable for the kiddies - plenty of very colorful language and a very dark theme are contained in this interesting adventure game created by talented indie developer Terry Cavanagh. Basically, you play as a young girl who is verbally abused (severely so) by her mother and father. You do the tasks they ask and watch the story get darker with each task. It's a short, ten or fifteen minute game, but one that's well worth your time to experience.
ape's rating:


The Pinball Arcade is almost like a pinball compilation since it simulates real pinball tables that you may have played at your local pizza parlor, gas station, arcade, etc. This brings some nostalgia to it for pinball enthusiasts. Like, I got to play the Ripley's Believe it or Not pinball machine that I enjoyed at the local bowling alley a few years back. The downside is that while it may be a pretty accurate simulation, it's still nowhere near as fun as playing the real tables. That said, this is a good choice for a traditional pinball experience. And a nice choice if you're looking for some quick fun on your Ouya.
ape's rating: 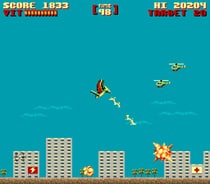 
I like giant monster movies. A lot. Gaurodan allows you to become the giant monster and destroy cities with the lightning bolts that you spew from your mouth. Basically, you just fly back and forth over the city, until every building is a pile of rubble and all of the helicopters and tanks firing at you are destroyed. It's a fun game with a decent premise, but it the fun does wear thin after a little while. Still, destroying cities is an enjoyable experience while it lasts.
ape's rating: 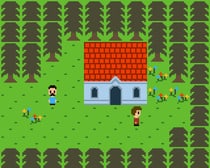 
Another dark story from Terry Cavanagh. This game starts out innocent enough and within the first minute, you might think that you're going on a whimsical little adventure as a little boy entering a forest near his house...Until you find the boy's "secret area" in the woods, and everything suddenly doesn't seem as jolly. It's a very short game with a very liner path (I haven't seen any alternate things to do, anyway) that you can probably beat in less than five minutes. But it's still entertaining enough for it to be worth a play through, especially if you're looking for a nice way to kill five minutes.
ape's rating:


Flashout is clearly a WipEout clone. It's a decent one, though. In Flashout 3D, you basically just race around the track, hitting speed boosts and picking up power-ups and weaponry to use against your fellow drivers. It's not quite as pretty as WipEout nor is it as fun to play...But for what it is, it's decent and among the best racing games I've played on the Ouya thus far.
ape's rating:


I like Air Pressure, but it's extremely short...Like beat it in three minutes, see all scenarios play out in ten minutes short. It's a visual novel, so it's nice to see that style of game get made here in North America (that genre is pretty big in Japan) even if it is extremely short and limited. It's worth checking out if you've never experienced a visual novel, so you can see what they're like without having to devote a ton of time into it. Otherwise, this is a passable, but still very, very short potential intro into the genre that is largely ignored outside of Japan.
ape's rating:


Don't Eat Soap! is a poorly made Bubble Bobble clone. Like in Bubble Bobble, your goal is to spit bubbles at your enemies, which then imprison your enemies into the bubbles that you spit out...Unlike Bubble Bobble, how you pop the bubbles seems to be totally random. I can jump into a bubble repeatedly and it won't pop. I jump at the next one and it pops without a problem. It's quite annoying and leads to plenty of cheap deaths when the enemies burst out of their bubble prisons as you're struggling to pop them. I like the intro to the game, explaining why Bob the Hamster can spit bubbles out, but a good intro can't save a poor game...and Don't Eat Soap! is a poor game.
ape's rating:

I'll be doing lists like this for all systems eventually. As I play games for the system, I'll add them to the list. They're ranked by my own personal preference, so keep that in mind if you can't figure out why game A is ranked above game B.

For release date info, I took the first release date and included the region the date comes from. Here's the key for that: NA - North America, JP - Japan, EU - Europe, AU - Australia