Adventure is basically the game that started the "adventure" genre. It laid down the groundwork for games like the Legend of Zelda to come along and improve upon. Playing Adventure today, you'll be able to see the similarities between this game and the 2D Zelda titles. But anyway, Adventure was fantastic back when it was released, and it's still pretty fun today. It's also got an awesome cheesiness factor to it since you're controlling a dot and fighting dragons that look like seahorses. Good fun.
ape's rating: 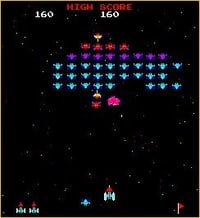 
Galaxian was the first game release by Namco, and it was the company's answer to Space Invaders...And it improved on the Taito classic in just about every aspect. Not only do the enemy spaceships move back and forth like in Space Invaders, but some ships will leave the formation and dive-bomb your ships. It also featured full-color graphics and a theme tune that played. In comparison to its better-known sequel, Galaga, that came out a few years later, Galaxian may not be all that impressive...But for its time, this game raised the bar for what a shooter should be.
ape's rating:


What a mess. Miniature Golf looks and plays nothing like the sport that it claims to be...That wouldn't be a huge deal if it was fun, but it's not. It's not even close to being fun. Playing the Atari version of Miniature Golf is like if you would jam a needle into your eyelid and then count how many blinks it takes before you start crying blood. Miniature Golf is the same thing, except you're jamming a needle into your soul every time that you play it. This is terrible, avoid it.
ape's rating: 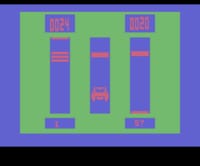 
I don't think that there is any kind of game more pointless than Slot Machine video games. People enjoy playing slots in casinos because of the chance to win money...You can't win money in a slot machine video game at home. When you're playing Slot Machine on the Atari 2600, you don't win anything except the realization that you just wasted your money on a horrible, horrible game. With the chance to win money gone, you're left pressing a button and watching uninteresting designs roll down the screen over and over. Sounds like fun, eh?
ape's rating:

Pokemon: Best to Worst by LordDarkrai

My Gaming Firsts by AVPGuyver21