As soon as the cherry blossom season ends, the gorgeous Wisteria flowers, that hang in grape-like clusters, take their turn on the Japanese floral calendar. The Fuji Matsuri, or Wisteria Festival, is celebrated each spring in Tokyo, Shizuoka, and Okazaki.

The Ashikaga Flower Park is one of the best places to admire different varieties of wisteria, including double-petaled wisteria, giant wisteria and yellow, white, light pink or purple variants of wisteria. 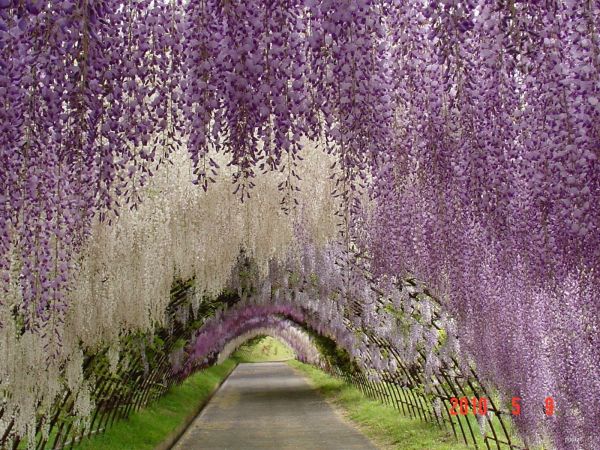 There are at least 49 species of Jacaranda, most of them native to South America (particularly in Uruguay, Brazil, Peru & Argentina), and the Caribbean basin. The tropical trees were imported to South Africa over one hundred years ago.

October is the month when the flowers of thousands of Jacaranda trees are in full blossom. This spectacular tree tunnel is located either in Johannesburg or Pretoria, the Jacaranda City where 70,000+ Jacarandas add vivid splashes of purple-blue to the urban landscape. 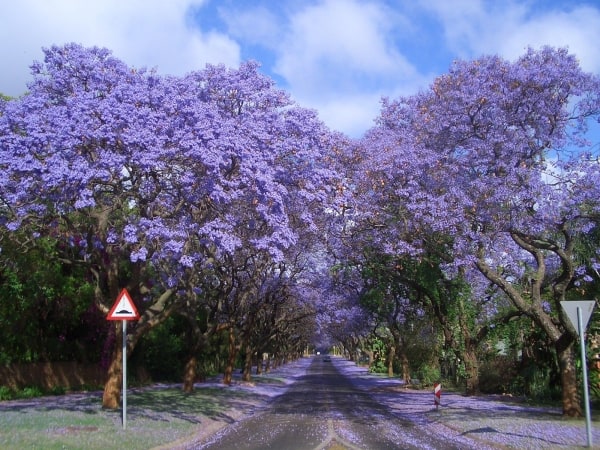 The Ukrainian Tunnel of Love is actually a two-mile sector of private railway that serves a woodworking plant near Klevan, a small city located in western Ukraine. I read somewhere that couples pass through this romantic tunnel to make a wish. The myth goes that, if their love is strong and pure, the wish will come true.

May all of your wishes come true, but watch out for the train! It runs three times a day through the leafy tunnel. 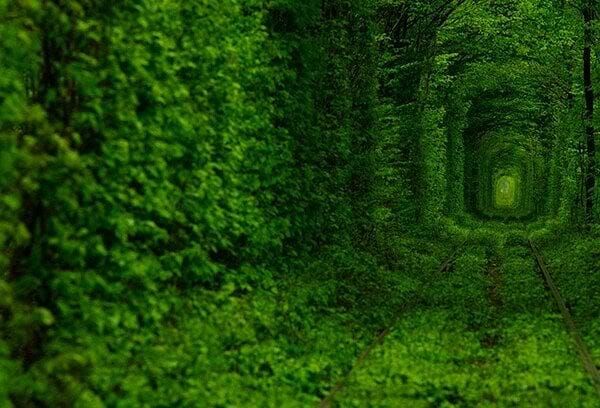 The Sagano Bamboo Forest is located in Arashiyama, a nationally-designated historic site. The pathway you see in the above picture is 500m long, and runs through one of Japan’s most beautiful bamboo forests. No wonder the Agency for Cultural Affairs declared Arashiyama a “Place of Scenic Beauty”. This forest is close to many famous temple and shrines, including the Adashino Nenbutsu-ji Temple.

The sound the wind makes, as it blows through the tall bamboo trees, has been voted by the Japanese authorities as one of 100 must-preserve sounds of Japan. 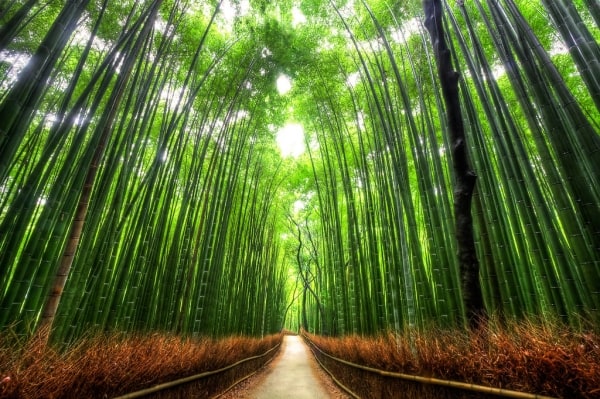 Tucked away in the county of Antrim, these beautiful beech trees are thought to be around 300 years old. According to local records, James Stuart planted the 150 beech trees in the 18th century, to impress guests as they approached his splendid property, Gracehill House.

Legend tells that the spirit of a maid, who lived in a neighboring mansion and died in mysterious circumstances hundreds of years ago, haunts the country road. “Grey Lady” silently floats along the road and quickly disappears as she reaches the last beech tree.

Check out Pawel Klarecki’s galleries for more spectacular photos of the Dark Hedges. 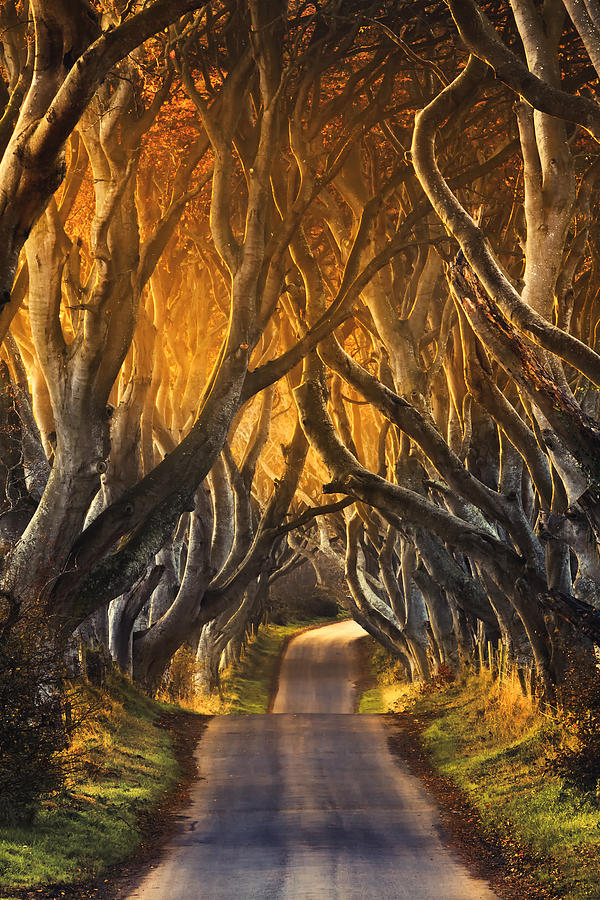 The medieval Aberglasney House features one of the most beautiful gardens in Wales, UK. They have been an inspiration to writers since 1470. The Yew Tunnel is a popular tourist attraction in this area. Believe it or not, it took nine years of pruning to restore this unique archway. “Years of neglect had left it unsafe and with a perilous future, as the once formally clipped structure had grown even higher than the top of the Mansion itself. It is so nice to see it looking invigorated and healthy again, I had every confidence that with careful restoration it would help its future longevity, but I have to confess that it did look drastic at the time,” declared Graham Rankin, one of Aberglasney’s directors.

The Yew Tunnel is thought to have been planted by the Dyer family of Aberglasney, during the 18th century. 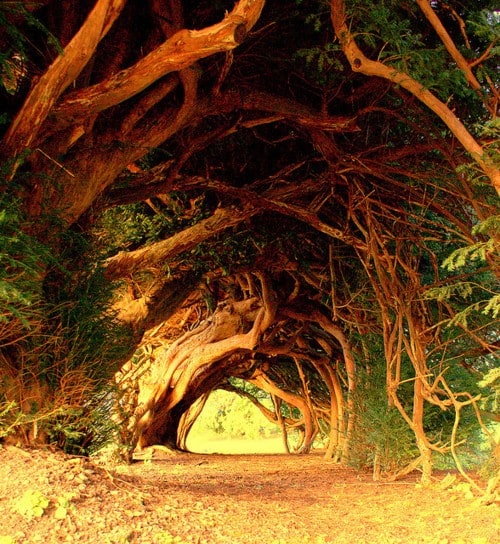 Gingko biloba is a highly venerated tree in Japanese culture. Six ginkgo trees survived the Hiroshima bombing, continuing to grow despite facing so many challenges, and are still alive today. Therefore, the Japanese regard the gingko as “the bearer of hope”. It is also known as “the survivor” or “the living fossil.”

Around 65,000 ginkgoes grace Tokyo’s streets, gardens and parks today. According to some people who visited Tokyo, the tunnel you see in the above picture is located in the outer garden of Meiji Shrine. 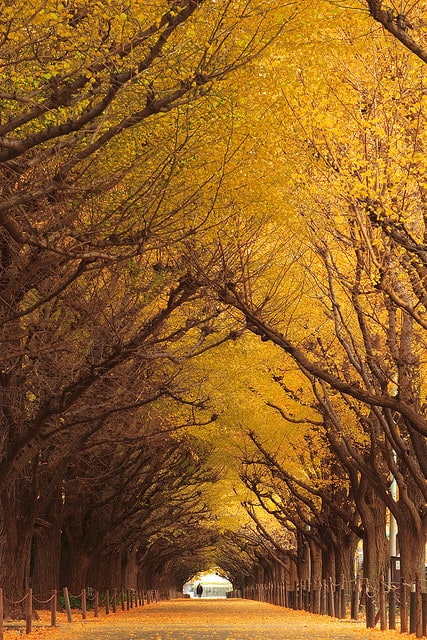 Photographed in glorious autumn colors by Kevin McNeal, this tree tunnel is simply astonishing! The picture was taken on the way up to Smuggler’s Notch, a Vermont state park.

The eye-catching foliage starts changing its color in the northern region, in response to many environmental factors, and spreads south as the fall season advances. 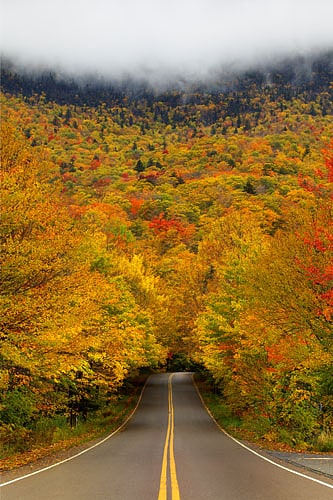 Number nine goes to Brazil’s green tunnel from Porto Alegre, Rua Gonçalo de Carvalho. According to a decree signed in 2006 by former mayor Joseph Fogaça, this beautiful street is part of the country’s historical, cultural, ecological and environmental heritage.

There are more than one hundred towering Tipuana (Rosewood) trees along Rua Gonçalo de Carvalho. The great shade trees stretch over three city blocks, which is a good thing for the city’s overall health. Did you know that trees, properly planted around buildings, can reduce air conditioning demands by up to 30%? 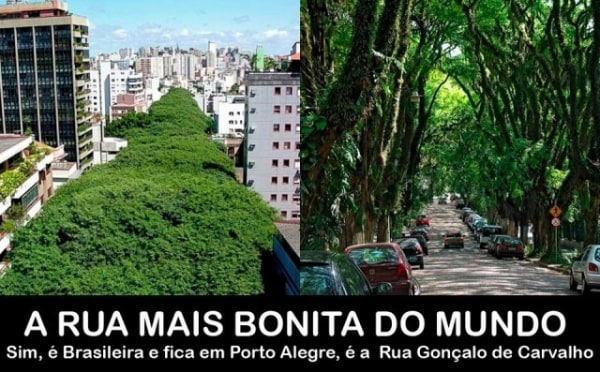 Each spring, a peaceful street, located in the German city of Bonn, transforms into an enchanting cherry blossom tunnel. Photographer Marcel Bednarz captured this stunning sight of cherry blossoms in full bloom. He explained to me that there are actually two streets in Bonn where cherry trees are planted, but the one you see in the above picture is called Heerstraße. As you may know, the average cherry blossom lasts only between 7 and 10 days, depending on weather conditions.

Similar tunnels can be found all over the world, so check them out if cherry blossoms are your thing:

- Cherry Blossom Festival in Macon, Georgia: over 600,000 people travel annually to Macon, to attend the 10-day long festival. Nearly 240,000 Yoshino cherry trees have been planted throughout that city in the last 30 years. “They’re everywhere, absolutely everywhere,” exclaimed Carolyn Crayton, the festival’s founder and executive director. “We’ve given them to anyone who wants them. We’ve even given them to Washington!” (Washingtonpost.com) 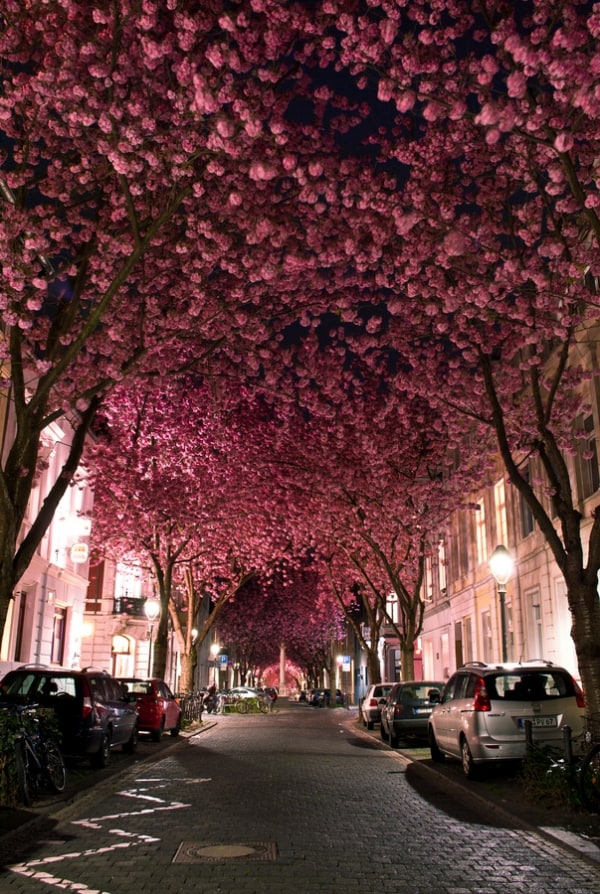 Trees, the longest-living organisms on Earth, beautify and protect our environment by providing color, shelter, and shade. They renew our air supply by soaking up carbon dioxide and producing oxygen. Read Top 10 Amazing Trees to discover some of the oldest and most fascinating trees that have graced the landscape for thousands of years.

You Know It's Hot When.... by Iceviper

my favorite movie posters by ♛ViσlєTa♛

My dedicated lists ☻ by Antares

We Miss You John... A Tribute To John Candy by Dark Warrior

Stairway To The Skies by Katherine Fell