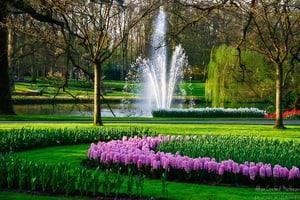 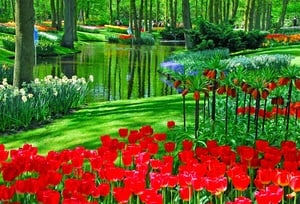 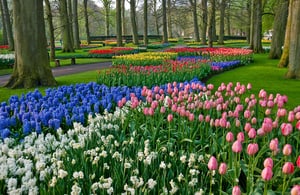 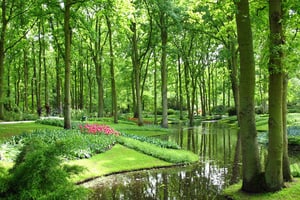 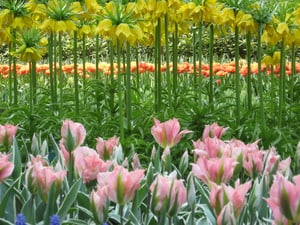 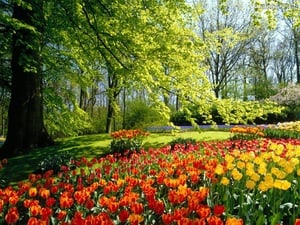 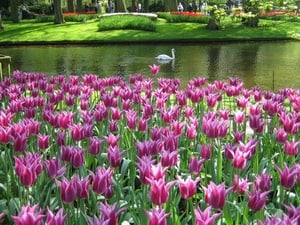 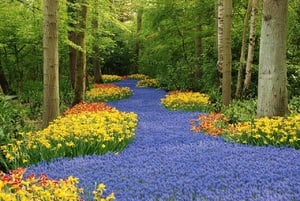 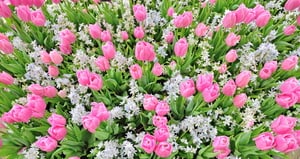 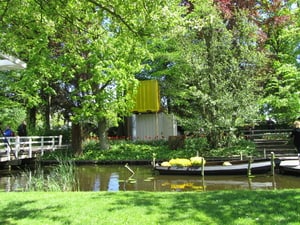 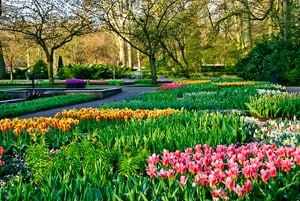 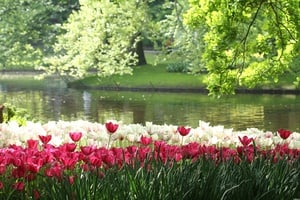 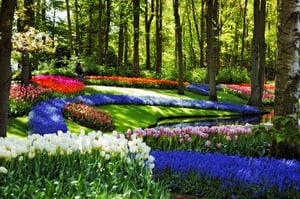 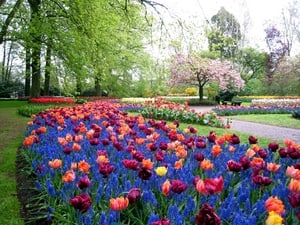 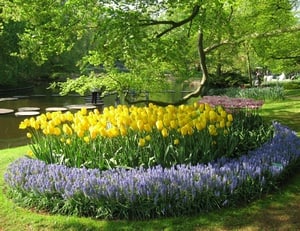 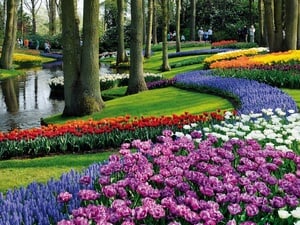 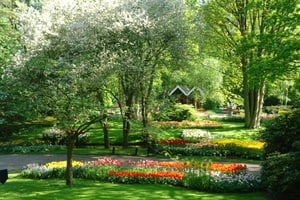 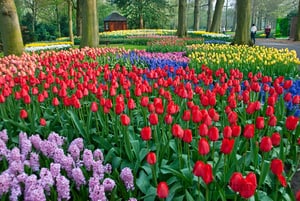 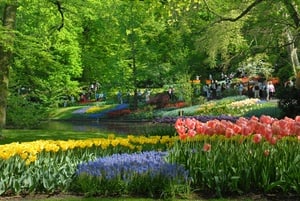 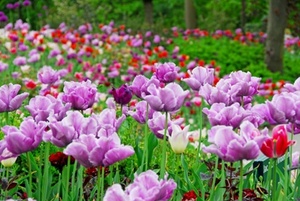 Keukenhof ("Kitchen garden"), also known as the Garden of Europe, is the world's second largest flower garden following Dubai Miracle Garden. It is situated in Lisse, the Netherlands. According to the official website for the Keukenhof Park, approximately 7 million flower bulbs are planted annually in the park, which covers an area of 32 hectares (79 acres).

Keukenhof is located in South Holland in the small town of Lisse, south of Haarlem and southwest of Amsterdam. It is accessible by bus from the train stations of Haarlem, Leiden and Schiphol. It is located in an area called the "Dune and Bulb Region" (Duin- en Bollenstreek).

Keukenhof is open annually from mid-March to mid-May. The best time to view the tulips is around mid-April, depending on the weather.

Keukenhof is situated on 15th-century hunting grounds. It was also a source of herbs for Jacqueline, Countess of Hainaut's castle, which is the source of the name Keukenhof (it served to provide herbs for the castle's kitchen). Rich merchants took over the grounds after the Countess's death. VOC captain and governor Adriaen Maertensz Block lived there in his retirement years in the 17th century in the country house (now known as Castle Keukenhof) which he had let built in 1641.

In the 19th century, the Baron and Baroness Van Pallandt assigned the landscape architect Jan David Zocher and his son Louis Paul Zocher, who had also worked on the Vondelpark, to design the grounds around the castle.

The garden was established in 1949 by the then-mayor of Lisse. The idea was to present a flower exhibit where growers from all over the Netherlands and Europe could show off their hybrids – and help the Dutch export industry (the Netherlands is the world's largest exporter of flowers).

The Keukenhof features a variety of different gardens and garden styles. For example, the English landscape garden features winding paths and unexpected see-through points (designed by Zocher in 1830, the garden architect of the Vondelpark in Amsterdam, among others). The historical garden is an enclosed garden where you can see many old types of bulbs. The nature garden consists of a water garden where shrubs and perennials are combined with bulbous plants. The Japanese country garden is a non-traditional garden in a natural environment.

The Keukenhof doesn't contain the long fields of tulips many visitors expect. However, there are tulip fields outside the Garden (mostly privately owned). These fields may have restricted access and are not included as part of the Keukenhof ticket.

The grounds of Castle Keukenhof are open all year long and are frequently used for festivals such as Castlefest, the Ladies Winternight, and the Christmas Fair. The castle also houses classical music performances.

Many dignitaries have visited the Keukenhof. Queen Juliana was a patron. Her daughters, princesses Beatrix, Irene and Margriet were among the first visitors in 1950. As a passionate filmmaker Prince Bernhard shot some unique films. Other members of the Dutch Royal Family also visited the Keukenhof. In 2001 prince Willem-Alexander and his girlfriend, Maxima, paid a visit to present themselves to the Dutch population. They planted a Tilia europea, the "Koningslinde".

In the autumn of 2003, Prince Willem-Alexander, together with Olympic medal winners Ankie van Grunsven and Pieter van den Hoogenband, planted the symbolical first bulb for the Olympic rings.

In 2005 the park was opened by Princess Margriet.

Catherine Keener - Movies I Have Watched by Kandi

The Beautiful One: Prince by Khiarahana

My Female Artists Lists by Kenji