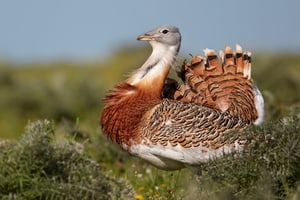 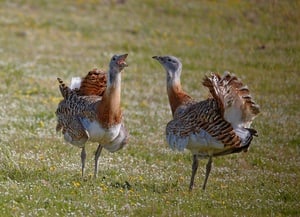 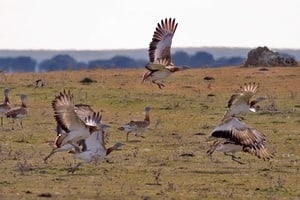 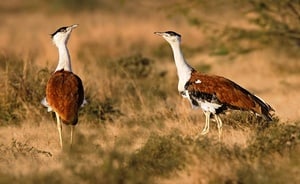 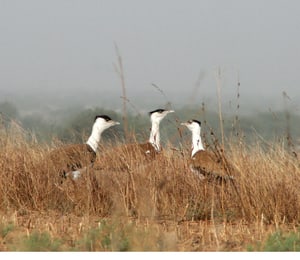 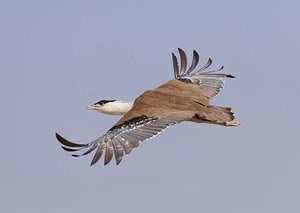 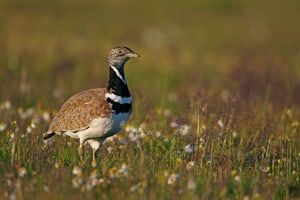 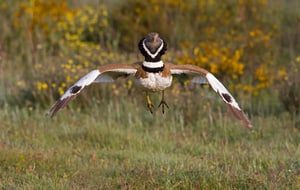 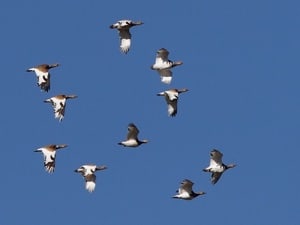 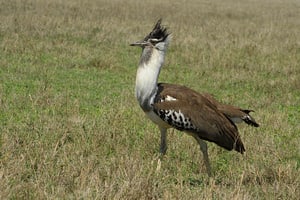 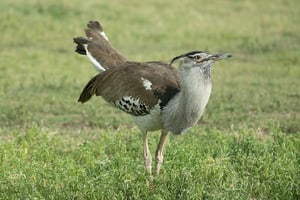 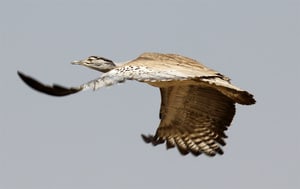 Bustards, including floricans and korhaans, are large and highly terrestrial birds mainly associated with dry open country and steppes in the Old World. They range in length from 40 to 150 cm (16 to 59 in). They make up the family Otididae (formerly known as Otidae). Bustards are omnivorous and opportunistic.

Bustards are all fairly large with the two largest species, the kori bustard (Ardeotis kori) and the great bustard (Otis tarda), being frequently cited as the world's heaviest flying birds. In both the largest species, large males exceed a weight 20 kg (44 lb), weigh around 13.5 kg (30 lb) on average and can attaining a total length of 150 cm (59 in). The smallest species is the little brown bustard (Eupodotis humilis), which is around 40 cm (16 in) long and weighs around 600 g (1.3 lb) on average. In most bustards, males are substantially larger than females, often about 30% longer and sometimes more than twice the weight. They are among the most sexually dimorphic groups of birds. In only the floricans is the sexual dimorphism reverse, with the adult female being slightly larger and heavier than the male.

The wings have 10 primaries and 16-24 secondary feathers. There are 18-20 feathers in the tail. The plumage is predominantly cryptic.

Bustards are omnivorous, feeding principally on seeds and invertebrates. They make their nests on the ground, making their eggs and offspring often very vulnerable to predation. They walk steadily on strong legs and big toes, pecking for food as they go. Most prefer to run or walk over flying. They have long broad wings with "fingered" wingtips, and striking patterns in flight. Many have interesting mating displays, such as inflating throat sacs or elevating elaborate feathered crests. The female lays three to five dark, speckled eggs in a scrape in the ground, and incubates them alone.

Bustards are gregarious outside the breeding season, but are very wary and difficult to approach in the open habitats they prefer.
(Wikipedia)

My favorite models - letter A by vadeboncoeur

The Fashion of Lupita Nyong'o by Emmabell

The Evolution of Leelee Sobieski! by Queen of Horror

old pond - frog jumps in - sound of water by Kenji

A Woody Allen selection (with quotes) by Kenji