Note: I don't think the *real* John Nash was an INTP but an INTJ- however, the Nash portrayed by Russell Crowe in the movie seems more INTP than INTJ. That distinction is important.

Clips from the movie that really emphasize the INTP-ness (keep in mind some of this behavior is also supposed to hint at his schizophrenia but a lot of it is just pure INTP behavior).

7.2
A.I. Artificial Intelligence (2001)
Even though he only had a relatively minor part in this movie, Teddy struck me as very INTP. Although he could also be INTJ. I have David (the boy robot) pegged as an INFJ but am open to other theories. 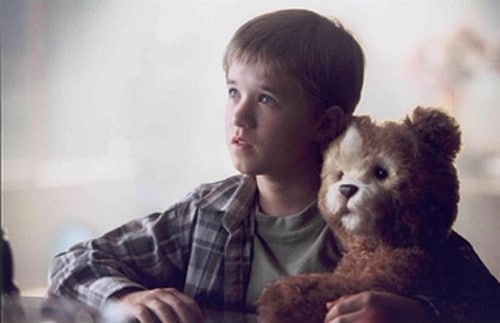 I remember hearing they were going to make a toy of Teddy around the time the movie came out. I actually wanted one, just so I could have someone I could relate to but it fell through...

Unrelated to this list or even this list's entry, but so far (as of 2010) this seems to be where the Japanese are at at giving us a "super toy" like "Teddy".

7.6
Close Encounters of the Third Kind (1977)
Roy Neary is such an INTP it's almost comical. He has the quirkiness down, the benevolent alien thing going on, the easy-going (could be mistaken as lazy) thing going on and the obsessive devotion to whatever he is into at the moment. 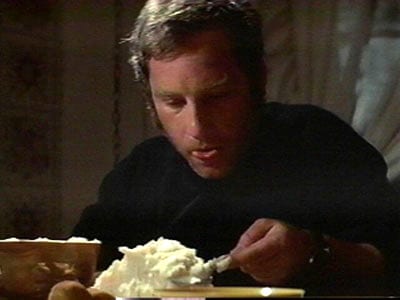 8
Criminal Minds (2005)
I am guessing Spencer Reid from Criminal Minds is an INTP, although he could also possibly be considered INTJ. Because he is not a real person but a fictional person he changes with the ratings. I have noticed that in the earlier seasons (especially seasons 1 and 2) he was very INTP and the little I have seen of the later seasons he is more J type.

7.6
CSI: Crime Scene Investigation (2000)
I am going to say Gill Grissom is an INTP but many assume INTJ because of his apparent confidence and the fact that he is more obviously productive than "most" INTPs. 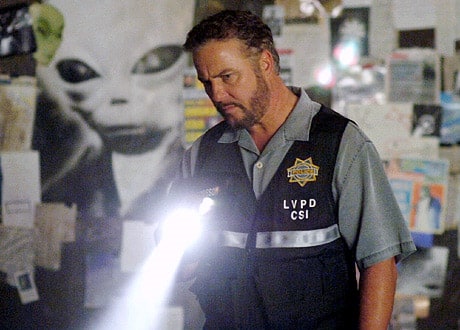 He has quite a lot of the P going on that I think is masked by his apparent confidence. He does change his mind and adapt to new information quite a lot and has the quirky bug-obsession going and no desire to really delegate to others or lead or follow. True INTJs do like to lead a great deal more than Grissom, which is why he makes the INTP cut as far as I am concerned.

I have noticed (not enough evidence to make an assertion that many INTPs are interested in hobbies that are complicated systems: video games that can be added to (and computer languages), role-playing games, studying insects (especially the social insect), paleontology, etc...
Lex's rating: 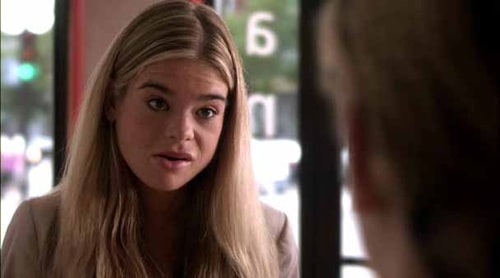 The above is a perfect example of an INTP. Keep in mind Donnie is 15, drunk and a schizophrenic.

The clip below brings back so many memories from multiple high schools I attended.

In some scenes he seems to have the confidence of an INTJ but considering the idiots he has to deal with, he can afford to appear a little over-confident. He also *knows* things because he has seen the future so that tends to make him appear more INTJ than INTP but his true nature is INTP.

7.9
Edward Scissorhands (1990)
Reclusive Inventor played by Vincent Price strikes me as INTP although I can see some people also thinking INFP just because of his childlike nature (again, going off stereotypes). INTPs CAN be child-like and happy go lucky. INTP is a way of looking at and addressing the world, but within that major personality type there is quite a bit of variability.

He might also be an INFP. Have to think about this. As these lists get larger it might be easier to tag characters without being as unsure. 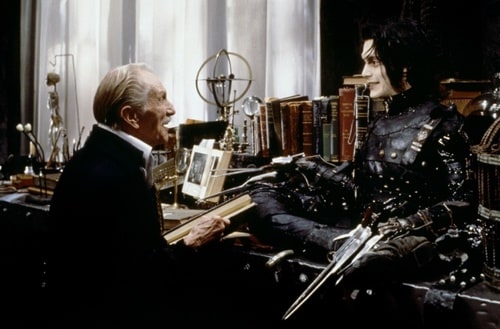 I may move the inventor to my future INFP list. I am debating Willy Wonka's character- he is only sociable when he has to find a protege so I'd say I (despite the golden ticket scheme). He is more intuitive than sensory (just to be able to do what he does and imagine all these future possibilities is much more N than S). He seems emotionally stunted a bit, despite the weird emotional outbursts (especially in the Tim Burton remake)- and while he comes up with ideas he is more than happy to let the Oompa Loompas do the work while he sits around tweaking the system towards quasi-perfection at whim. So my guess is Willy Wonka is a very hard-to-read INTP.
Lex's rating:

Of course he is also a robot, but considering that, he still comes out as INTP.

I think Brian is a little too idealistic to be a true INTP so I will probably move him to the INFP list (along with Emily from the INFJ list, the inventor from Edward Scissorhands from this list, etc)...
Lex's rating:

7.8
Gattaca (1997)
Vincent Freeman (Ethan Hawke's character) has got to be an INTJ- he is too confident to be anything but a J and the other factors are self explanatory.

Despite his suicide attempt, Jude Law's character, Jerome Eugene Morrow seems very INTP: both passionate and strangely dispassionate and bored all at the same time. It's a weird paradoxical quality seen in most INTPs (passion mixed by apparent indifference) that many people misread.

Haha. It's funny how we can see ourselves in others of the same personality type.
Lex's rating:

7.8
Kramer vs. Kramer
Ted Kramer from Kramer vs. Kramer seems pretty much like a classic INTP (he loves his son and cares deeply but can seem a little cavalier to onlookers at times)...

It's hard to tell with kids, especially, but
Billy Kramer also strikes me as a budding INTP maybe more than any other kid I have seen on-screen. INTPs can be hard to peg, but Billy strikes me as one. 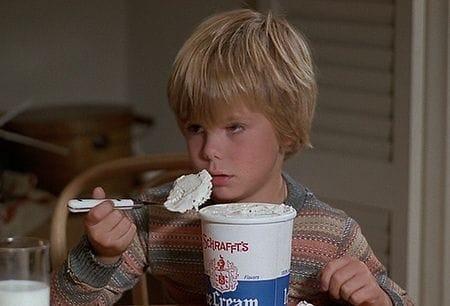 All the kid can think of is grilling his father's "business associate", even though she is half-naked and obviously uncomfortable. Heh.

An INTP father and son...funny to watch... I love when Dustin Hoffman mocks the 5 year old kid regarding the ice cream.

Classic little kid INTP stare off at about 50 seconds in! HA!

And even when he gets older and is in "Sixteen Candles" he still seems like an INTP in that role... so maybe actors are type-cast to play certain MBTI types. Haha.
Lex's rating: 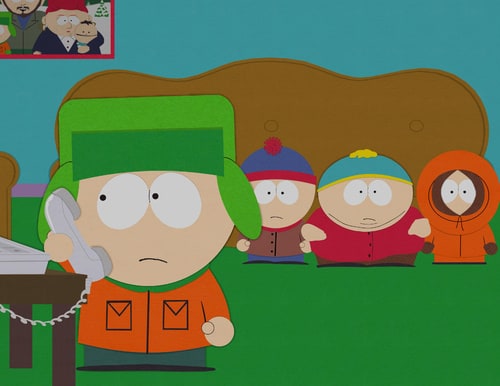 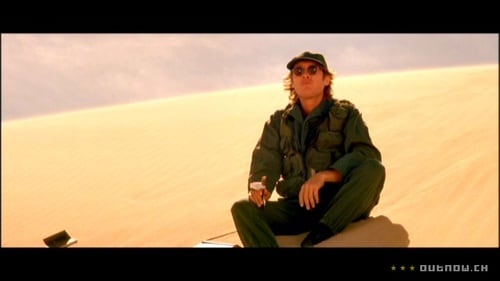 Daniel Jackson, INTP extraordinaire, rambles on about what he finds interesting even though most people consider him a total kook... 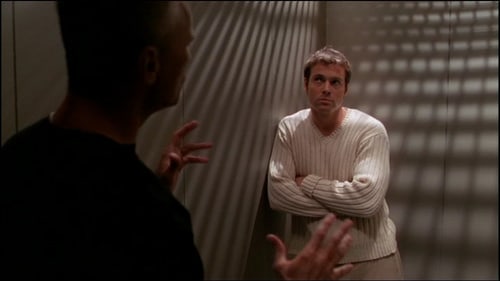 A perfect example above of an INTP being too smart for their own good. 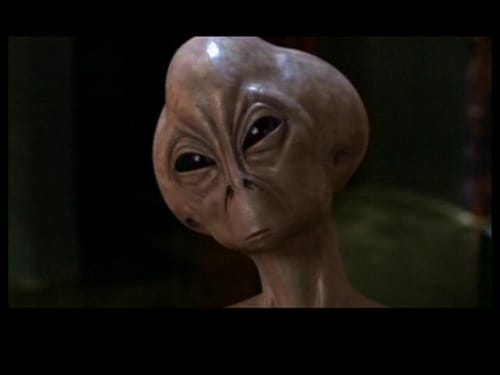 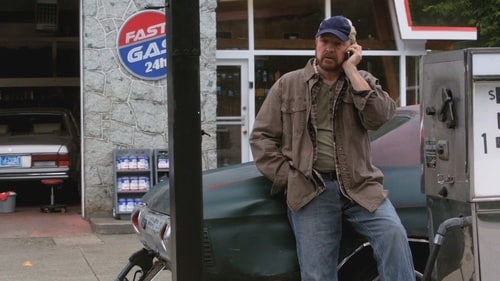 Miette, as well, could be a possible INTP, but I could also peg her as an INTJ. She doesn't seem like an ISTP or ISTJ to me. She is a definite I, and seems more N than S 9although given her upbringing she does have quite an acute awareness of her surroundings which most INTPs do not possess but how much of that is survival)- definitely a T type and...damn she could almost equally be P or J. What some might view as confidence others might view as apathy with this character. I am going to trust my initial hunch and think- abused, neglected, eerily self-sufficent INTP.

8.6
The X Files (1993)
Fox Mulder is a definite INTP. As you can probably see, even amongst INTPs (even strong INTPs) there is a lot of variability as to how INTPs act (after all, you can't fit the entire world into 16 basic types- and if you try, like I am, you are still going to see a lot of difference even amongst those with the same type). 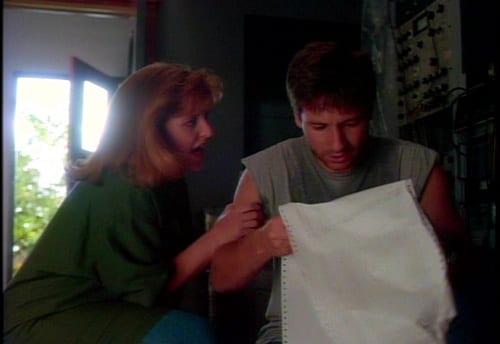 Some people assume Mulder is an INFJ- hell give an INTP enough guilt and crap and they wil 8eventually* react. Besides, I am a strng INTP and my sister is a strong INFJ and I don't see her in Mulder. I see a lot of myself in that character though. Scully, I think, is an ISFJ or ISTJ (although apparently a lot of people see her as an INFJ- I don't see the N at all though, not for Scully).
Lex's rating:

INTP stands for Introverted, Intuitive, Thinking, Perceiving and is one of 16 basic personality types on the MBTI (Myer's-Briggs Personality Type Indicator). Contrary to popular belief introverts are not necessarily shy or taciturn (quiet)- they can be quite garrulous and confident but they all get their sense of energy and motivation internally (as opposed to being energized by external events such as interactions with other people). INTP's are more intuitive than sensory, meaning they tend to be more excited by what is possible, as opposed to what is actual and can be defined by the five senses.

They tend to view the world through an objective, analytical viewpoint (hence, they are referred to as "thinkers")- this does not mean that types that are "feelers" are less intelligent or that INTPs don't feel, but rather they tend to base most of their decisions on arguments that are logical (even if they don't seem so to those who are watching) and are less swayed by emotional arguments. Some people who rank strongly INTP may even seem cold, unempathic or uncaring (they aren't, they may not show it as well or may not even be aware of the social cues). Lastly, because they are "perceivers" as opposed to judgers they tend to be open to new ideas (as long as they are presented in a logical, coherent form).

Respect must be earned for the INTP and they tend to be unimpressed by labels and status *alone*. They tend to get along very well with INTJs, although INTJs tend to be a great deal more confident.

This is my description based on the fact that I am a female INTP and have studied personality types for quite a while. Much more info is available online.

www.personalitypage.com/INTP.html
The above is a basic "portrait" of an INTP.

Contrary to popular belief, not all INTPs are computer nerds or math prodigies although most, if not all INTPs are interested in complicated systems (language, math music) where they can play and explore new possibilities. They tend to be oblivious to the outside world (it is not uncommon for those that rank strongly INTP to seem slightly spaced out and not completely "present" and many can relate to walking into doors because they are busy thinking about other things). The "absent minded professor" as well as the "evil genius" roles are extreme stereotypes of this personality type.

Approximately 3-4% of the population is INTP and of that the vast majority are male. Because personality typing is not an exact science at the best of times and I am including fictional characters here, please take the following list with a grain of salt. Sometims if a character seems INTJ AND INTP depending on the context, I will include him here (I am suspecting the females on this list are going to be quite limited). Because they are introverts, tend to be "socially inept" and "over-analytical" as well as "quirky" (by non-INTP standards) they are often depicted in the media as misunderstood or misanthropic genius types. Again, that is a stereotype.

Please enjoy my list and I may perhaps get around to making lists of other basic types in time.

Keep in mind that not all introverts are quiet and taciturn (can't stress that enough) and only the person analyzing themselves can tell you their motivations for things...also, yes, I know "A Beautiful Mind" is based on a true story but I wanted to include Nash in this list.

The Ukulele Revolution by tartan_skirt

Favourite Albums from the 1990s by Abhi

Live and in black and white by vicky

The evolution of David Gallagher by Bad☆Alice

Academy Award Winners For 2016! by SleepyHollowFan5

Geniuses in film... by Lex

Based on a True Story by Lex