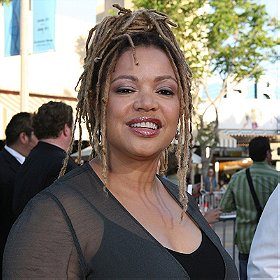 8 votes
Behind the camera...Black directors (75 items)
list by Dj Levels
Published 2 years ago

1 vote
View all Kasi Lemmons pictures
Kasi Lemmons (born Karen Lemmons; February 24, 1961) is an American film director and actress, most notable for her work on the films Eve's Bayou, The Caveman's Valentine and Talk to Me. She was described by film scholar Wheeler Winston Dixon as "an ongoing testament to the creative possibilities of film".
Tags: Female (1), American (1), Actress (1), Director (1), Filmmaker (1), Screenwriter (1), Dreadlocks (1), Directress (1), Dreads (1)
My tags:

1. The Silence of the Lambs

1. The Silence of the Lambs

4. As the World Turns

1. Whitney Houston: I Wanna Dance with Somebody

4. Women of the Movement
View all Kasi Lemmons TV

1. Women of the Movement

omnivorousrex added this to a list 1 year, 10 months ago
Tribute...Black directors...Behind the camera (79 person items)

SomeBloke voted for an image 1 year, 11 months ago

Dj Levels added this to a list 2 years ago
Behind the camera...Black directors (75 person items)

django123 posted a image 3 years ago

django123 voted for an image 3 years ago