The Legend of Zelda: A Link to the Past & Four Swords - Game Boy Advance 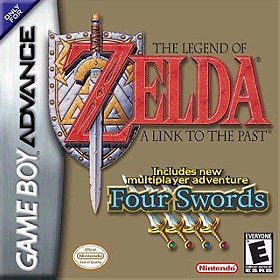 56 votes
All The Video Games I Have Beaten In My Lifetime (1017 items)
list by Silver Falcon Soul
Published 1 year, 9 months ago

4 comments
View all The Legend of Zelda: A Link to the Past & Four Swords lists (36 more)

The Legend of Zelda: A Link to the Past is a top-down action adventure game (similar to the original Legend of Zelda) for the Super Nintendo and Game Boy Advance. Players assume the role of Link, and their goal is to rescue Princess Zelda and save the land of Hyrule. Unlike turn-based RPGs, all combat in Link to the Past is in real-time - you swing your sword at enemies by pressing a button, or can spin the sword around you for a more powerful attack by holding down the button until it is charged.

Progression through the game is done by conquering a series of dungeons - each dungeon has its own special item associated with it, such as the hookshot (which latches onto a far-off object and pulls Link across) or the hammer (which can be used to flatten objects in your way). Most of these dungeons are rendered impassable until the dungeon's particular item is acquired; from there, the rest of the dungeon becomes accessible due to Link's latest new ability. The bosses of each dungeon are also themed to that level's particular item.

Link starts out with only three units of health; however, these can be increased by defeating dungeon bosses, which give one additional heart container, or by finding four 'pieces of heart'; which can be given for anything from passing a small trial to winning a mini-game. Some of Link's items also use magic - this can be refilled with collectible green magic pots. After defeating the initial three dungeons, Link gains access to the Dark World - many puzzles and difficulties come from alternating between the Light World (Hyrule) and the Dark World to make your way past previously impassable obstacles.

moop added this to a list 1 year, 3 months ago

" The first game in the series to follow the structured dungeon-to-dungeon gameplay with a set story, A Link to the Past set the standards for how Zelda games played for more than two decades. While it doesn't have the finesse of subsequent games in terms of gameplay and the story is pretty bog-standard, at times vague in my opinion, it's an absolutely solid Zelda game from beginning to end and to this day, still offers unique perspectives that other Zelda games haven't emulated or have tried to"

Waleed added this to a list 1 year, 7 months ago
GBA Games (60 games items)

Silver Falcon Soul added this to a list 1 year, 9 months ago

Dino Jones added this to a list 2 years, 5 months ago

Stilettophant added this to a list 3 years, 2 months ago

Jacket added this to a list 3 years, 9 months ago
Videogames (378 games items)

jgc added this to a list 4 years, 9 months ago

matpika added this to a list 5 years, 2 months ago
The Legend of Zelda Series (27 games items)