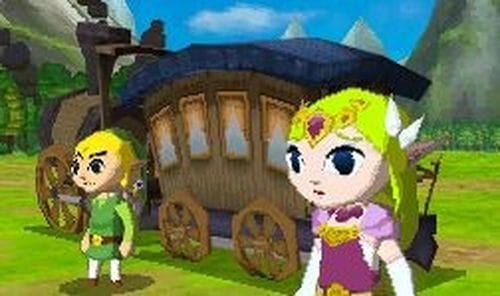 Starting off the list is a Zelda game not many people talk about or even remember with the usual fondness that you see from the series. Spirit Tracks stands out to me for its unique gameplay involving many aspects of the DS such as the stylus and mic, quirky story with multiple endings and in my opinion, the best portrayal of Princess Zelda in any game in the franchise. She has a ton of personality and unlike other Zelda games, she's actually part of the whole gameplay instead of just a damsel in distress or a last minute help to fight the final boss. Unfortunately, it is brought down by the incredibly tedious Tower of Spirits and the unexciting train traversal mechanic. Other than that, it's a solid Zelda game.
moop's rating:

0
The Legend of Zelda: A Link to the Past & Four Swords... - Game Boy Advance 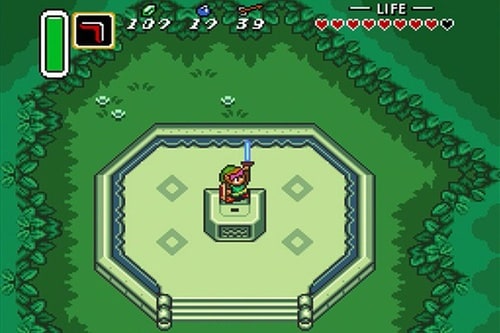 The first game in the series to follow the structured dungeon-to-dungeon gameplay with a set story, A Link to the Past set the standards for how Zelda games played for more than two decades. While it doesn't have the finesse of subsequent games in terms of gameplay and the story is pretty bog-standard, at times vague in my opinion, it's an absolutely solid Zelda game from beginning to end and to this day, still offers unique perspectives that other Zelda games haven't emulated or have tried to follow but on a sub-par level. I recommend playing the Game Boy advance version for the handheld aspect plus a fun bonus multiplayer mode called Four Swords.
moop's rating:

0
The Legend of Zelda: Ocarina of Time 3D - Nintendo 3DS 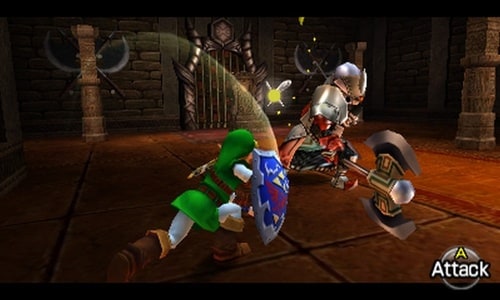 Well, I bet you didn't expect this game to be outside of the Top 5 but I just do not get the hype behind Ocarina of Time. The original N64 version has a choppy framerate, clunky controls, and it's fucking ugly - I think the original Zelda game looks better than it - and subsequent Zelda games have surpassed it in many aspects. Now that I'm done throwing shade, Ocarina of Time is the most lovingly traditional 3D Zelda game ever and for almost 20 years every 3D Zelda game abides by what it accomplished. Amazing music, memorable dungeons, solid gameplay that still holds up to this day, and while the story is the most standard out of all the 3D Zelda games, it's still the most iconic. I would say play the N64 version if you want to experience it as it was originally but If you want to enjoy this game to the fullest, play the 3DS version instead, it's just an objectively better version.
moop's rating: 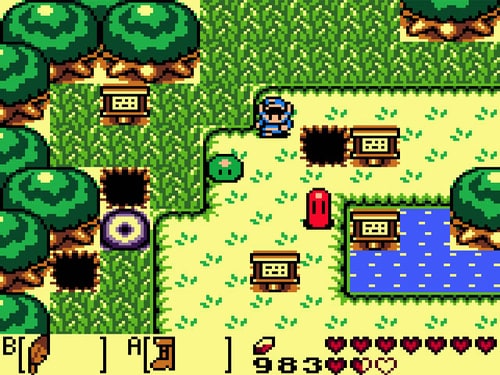 The first handheld Zelda game in the series and man, it was quite the adventure. Possibly the quirkiest and most unusual Zelda game in terms of story and tone, it was a departure from the series' usual plot of save Zelda and Hyrule from an evil pig person and instead involves waking up a giant fish. Gameplay wise, it is astonishing how they manage to fit so much with such limitations but Link's Awakening has a lot going for it, from incredibly inventive dungeon designs, call-backs from other Nintendo franchises, and keeping Zelda's usual deep mechanics intact. I would recommend the Switch remake of the game if you want a modern take on it but if you want to play it like how it was originally made, get the DX version of the game for the sole reason that it has colours.
moop's rating:

0
The Legend of Zelda: The Minish Cap - Game Boy Advance 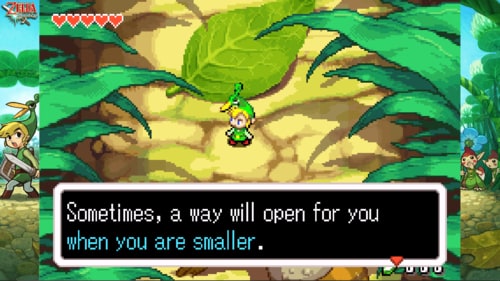 My favourite handheld Zelda game, it disappoints me that barely anyone talks about The Minish Cap. From top to bottom, this game delivers the most complete handheld Zelda experience. Following the Four Swords storyline, the main mechanic is that you shrink, which gives it a lot of opportunities to show off the GBA's power and how it affects the overall gameplay. While it is short, every single dungeon is memorable and takes advantage of its shrinking mechanic (two boss fights are just normal enemies but you are much smaller than them), it controls like a dream, and it has a lot of charm to its story, world and characters (your companion is a talking hat). Nintendo, please remake this game...
moop's rating:

I bet you are thinking "Yo, Skyward Sword is like, the worst in the series, I can't believe you put it above Ocarina and ALttP". And to that I say yes oh yes oh fucking yes. Skyward Sword is the most underrated and underappreciated Zelda title in the series in my opinion. It's the best looking game on the Wii, it's the best game on the Wii, and I think it deserves more love than hate. Yes, the motion controls does take a bit of getting used to but when it works, it offers the most forward-thinking gameplay I've ever seen in any Zelda game before or after it, and while the pacing and repetition is a bit grating, there is something compelling about how it represents its world through throwbacks, that its continuously evolving with every action you do. Oh and the dungeons - one of the best sets in the series. It also has my second favourite incarnation of Princess Zelda and my favourite cast of supporting characters. So yeah, Skyward Sword is awesome and I wish people would give it a chance.
moop's rating:

0
The Legend of Zelda: Breath of the Wild - Nintendo Switch 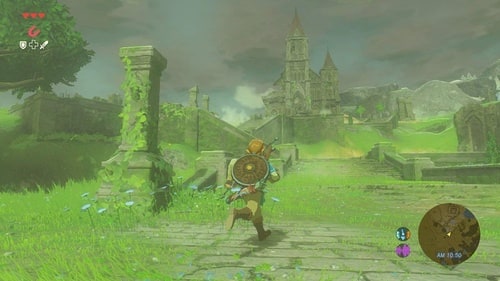 Going into Breath of the Wild, I was expecting it to be Nintendo's interpretations of modern open-world games. Instead, it became THE game for future open-world games to aspire to. Breath of the Wild is a welcome radical departure from A Link to the Past's tried and true formula without sacrificing what makes Zelda so memorable and special, as well as in my opinion, the best open-world game ever made. Everything in the vicinity leads to something that is of interest and in turn, encourages experimentation and exploration of its ridiculously massive map. Not only that, I think this game has the best combat in the entire series, every combat scenario you go into, something cool or unexpected happens, whether its from your own skill and planning or a random anomaly e.g. sudden thunderstorms. It is unfortunately bogged down by its sparse and pretty forgettable story but the gameplay aspect is so well-done, this is one of the few instances where the story does not matter.
moop's rating: 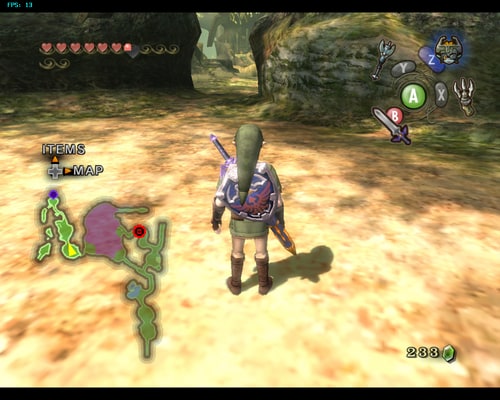 As the result from fan whinin-sorry, feedback from how cartoony The Wind Waker looked, Twilight Princess is Nintendo's answer to those who wanted a "serious" and "realistic" Zelda. I will comeback to this later. Anyways, Twilight Princess offers hands down my favourite story in the entire series, as well as being just an overall solid Zelda adventure. Taking Ocarina of Time's structure and gameplay style but making it better, as well as dropping a bit of darkness to its aesthetic and plot, I would call it a proper follow-up to Ocarina. As I've said before, it has the best story in any Zelda game, and that is thanks to your sassy yet lovable companion Midna. One of the best sidekicks in gaming history, Twilight Princess' story and main mechanic revolves around her, and the way she is written and portrayed towards the story elevates this from a standard Zelda game to an exceptional one. I could recommend the WiiU remaster as it adds a lot of quality of life improvements but its cleaner graphics defeats the purpose of its dark aesthetic so I say go with the Gamecube version if you want to play it as it was originally intended.
moop's rating: 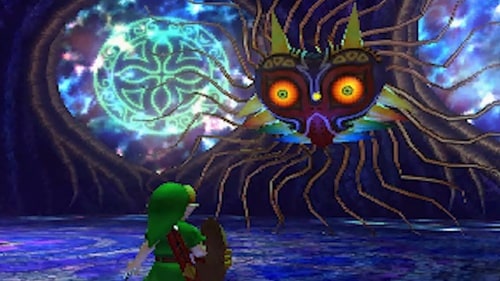 While Twilight Princess was dark, its darkness was more into its aesthetic rather than its story and tone. Majora's Mask on the other hand takes that to a literal sense. The darkest and most compelling Zelda game in the series, it takes the quirky nature of Link's Awakening but add a ton of depressing and macabre themes into it. Majora's Mask utilises a three day in-game clock mechanic where in that time period, you need to do as much as you can to find out how to save Termina from an ominous looking moon. Retaining Ocarina of Time's gameplay and with a heavier emphasis on sidequest, Majora's Mask is all about planning your schedule to complete a main dungeon and helping the folks of Termina as much as you can before their impending demise. It's sad, it's melancholic, it's creepy - not to mention challenging in terms of gameplay and story - it is a one of a kind experience. Like with Ocarina of Time, the N64 version of Majora's Mask is an ugly, clunky, choppy mess so play the 3DS version instead.
moop's rating: 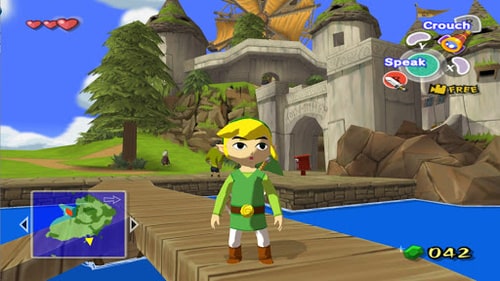 When Wind Waker came out, it got quite the backlash from critics and fans for having a more cartoony art style rather than graphically updated aesthetics similar to Ocarina and Majora, which Nintendo answered with Twilight Princess. More than 10 years later, Twilight Princess' graphics looks the part in terms of the era it came out in while Wind Waker still looks amazing today as it did when it came out, with many of the fans and critics that originally bashed the game for the same exact reason retracting their statements. Wind Waker isn't as unique and remarkable in the gameplay department as Majora's Mask and Ocarina and doesn't have the same calibur of story telling as Twilight Princess but to me, this game embodies what I think about when it comes to Zelda - the joy of adventure. It has my favourite incarnation of Link, who is the most expressive out of all the Links in the series, and it's premise is the easiest to relate as this is the first time Link wasn't the promised hero but just a kid that wants to save his kidnapped sister. The sailing is controversially my favourite aspect of the game as I just loved exploring the vast sea, visiting all the islands I can to see what they're hiding, which in turn, I also ended up loving the Triforce hunting quest, which I am pretty sure no one liked. This game is a masterpiece, please check it out. While the original GameCube version is easily playable today, I would definitely recommend the WiiU version as unlike Twilight Princess, it emphasises the beauty of its cell-shaded graphics with its HD upgrade plus the quality of life improvements like a shortened Triforce hunting quest.
moop's rating:

Custom
Zelda games are awesome, play at least one or two in your life.