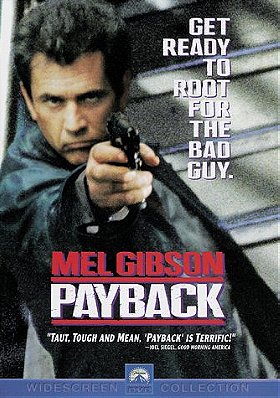 7 votes
DVDs That I Own (782 items)
list by Agent Kermit D. Fonz
Published 11 years ago

not bad, but not great either

robelanator
1 vote
Disclaimer: my view may be biased because I watched the other (and, in my opinion, far superior) film based on Richard Stark's The Hunter, Point Blank (1967), the night before I watched Payback.

One thing that irked me about Payback was the soundtrack-- it was way too obvious. The worst example is the use of the BB King tune "The Thrill is Gone" after a kidnap victim is lured into ... read more
View all Payback reviews

Kudos to Gibson and Icon for giving Helgeland a chance to restore his film and get it out on this DVD. But a look at both versions (this disc does not include the theatrical cut) back-to-back can certainly make one's head spin. Icon’s revisions in the original release show little faith in a contemporary audience’s ability to discern much about a story or mood or character from spare but telling details. That film relies on crass swatches of voiceover narration, cute inserts, added scenes, and hipster tunes on the soundtrack. All of that was designed to tell an audience how to feel rather than encourage a cinematic experience encountered with an open heart and mind. Worst of all is a specious third act nakedly built around an obligatory Gibson-gets-tortured sequence, leading the film to a lazy, comforting conclusion. The Director’s Cut eschews all of that. Gibson’s character, Porter (based on the central character in the novel "The Hunter," written by Donald E. Westlake under the pseudonym Richard Stark), is a man returning from the brink of death with nothing but his identity and the memory of something (an almost-nominal amount of money) taken from him. His iron determination, his capacity for brutality and inducing fear, and his survival instinct make him anything but warm and cuddly. It's his few ties to the past--especially an interrupted relationship with a call girl (Maria Bello)--that humanize him. One doesn't have to like Porter; one just accepts him and follows his journey in an honest, unmitigated fashion. That’s exactly what Helgeland does, and his cleaner, leaner, smarter cut is instantly rewarding for its uncompromising, undistracted toughness. Special features include a documentary about the film’s history, and a wonderful interview with Westlake. --Tom Keogh ... (more) (less)
Manufacturer: Paramount
Release date: 27 July 1999
Number of discs: 1
EAN: 9780792156246 UPC: 097363363279
Tags: Action (5), Revenge (4), Crime (3), Thriller (3), Vengeance (2), Gangster (2), Remake (2), Drug Overdose (1), Chinese Mafia (1), Exploding Body (1), Neo Noir (1), Exploding Car (1), Shootout (1), Twist In The End (1), Sadist (1), Pickpocket (1), Anti Hero (1), Double Cross (1), Corrupt Cop (1), Sadomasochism (1)
My tags:

YAHEMMI added this to a list 6 years, 3 months ago
My DVD COLLECTION (7267 dvds items)