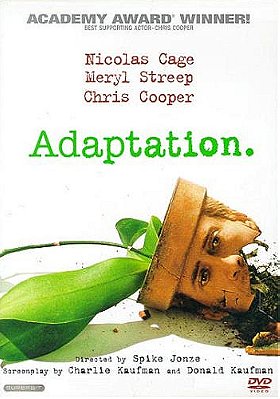 From The New Yorker
The hero of the new experimental comedy by the writer Charlie Kaufman and the director Spike Jonze ("Being John Malkovich") is Kaufman himself, played by Nicolas Cage. He's in a dreadful quandary, having signed on to adapt Susan Orlean's "The Orchid Thief," which grew out of a 1995 article in this magazine. "Great sprawling New Yorker stuff," Charlie calls the book, by which he means it's a screenwriter's nightmare-ruminative, descriptive, but lacking the clear kind of "arc" that can be shovelled into a movie. Cage's Charlie, a malcontent who wears a flannel shirt in Los Angeles, works himself into a fury of self-loathing, and, for about an hour, the movie is a funny, deft metafiction that jumps back and forth among Charlie's feverish self-doubts, his erotic fantasies, and the story he is attempting to write. We see that story: Orlean (Meryl Streep) tags along with John Laroche (Chris Cooper), a Florida man who was arrested while stealing a rare form of orchid from a state wilderness preserve. Unsocialized but erudite, a moralist, a theorist, a swamp-bred crank, Laroche fascinates the melancholy Orlean, who feels her life lacks a consuming passion. The performances are all expert, especially Cooper's, but the movie takes a disastrous leap into melodrama at the end, which can be interpreted as either a sellout to Hollywood convention or a savage self-parody of selling out. Either way, it's a mistake. -David Denby
Copyright © 2006 The New Yorker