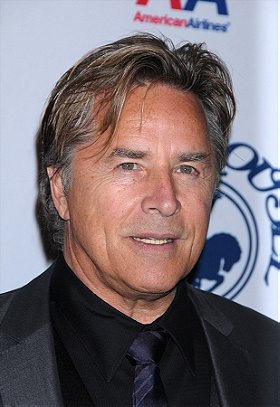 .Best known for his starring role as Det. Sonny Crockett on the hugely successful TV series Miami Vice (1984), Don Johnson is one of the stars who really defined the 1980s. As James "Sonny" Crockett he went toe-to-toe with drug dealers, pimps, prostitutes, assassins, illegal arms-dealers and crooked cops on a weekly basis from 1984 to 1989, appearing in a grand total of 110 episodes. The show, which was executive-produced by four time Oscar-nominated director, producer and writer Michael Mann, paired Johnson with the equally cool Philip Michael Thomas as Det. Ricardo Tubbs and the calm and stoic presence of Edward James Olmos as Lt. Martin Castillo. It revolutionized television with its modern fashion, pop music, unique style and use of real locations. Johnson typically wore $1000 Armani, Versace and Hugo Boss suits over pastel cotton T-shirts, drove a Ferrari 365 GTS/4 Daytona (later a Ferrari Testarossa) and lived on an Endeavour 42-foot sailboat named "St. Vitus' Dance" with his pet alligator Elvis. He also had full use of an offshore powerboat. Still, "Miami Vice" had not only style but substance, and his portrayal of the Vietnam veteran turned vice detective turned Sonny Crockett into the world's favorite cop. For his work on "Miami Vice" Johnson won a Golden Globe for Best Performance by an Actor in a TV Series in 1986, and was nominated in the same category a year later. He also picked up an Emmy nomination for Outstanding Lead Actor in a Drama Series in 1985.

lalabellexoxo added this to a list 3 years, 9 months ago
My Hottest Men In Entertainment List 2016 (373 person items)

Brian G added this to a list 5 years, 5 months ago