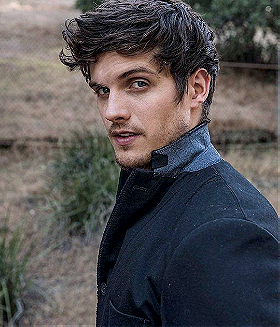 Sharman started acting as a child at the age of nine. He auditioned for the Royal Shakespeare Company and was selected out of hundreds of other children. "I just adored it," he said of his venture into the dramatic arts. "Between Macbeth and Henry VI with all of the armour and the blood and everything, it was just fantastic as a kid. It was the best thing ever." Sharman stayed with the Royal Shakespeare Company for two plays: The Park in 1995 (age 9) and Macbeth in 1996 (age 10). He also acted in the touring play The Winslow Boy in 2002 at age 16.

Sharman attended the private boarding school Mill Hill School, where he was known as Dan Sharman and also the Arts Educational School, both in London. During his school years, he acted in the play "Kvetch" that made it to the famous Edinburgh Fringe festival.

For three years, from 2004 to 2007, Sharman studied at the London Academy of Music and Dramatic Art, gaining a Bachelor of Arts degree in acting.

Sharman's first feature film role was in the independent film The Last Days of Edgar Harding, in which he played a musician. In 2010, he was cast as Ares, the Greek god of war, in the fantasy film Immortals with Mickey Rourke, Kellan Lutz and Henry Cavill among others; the film was released in 2011. "I found acting on film really difficult," he admits of his first screen performances. "I found it really kind of odd and unnatural. Then I became obsessed with trying to get it right. I'm hugely competitive." Sharman appeared in the horror film The Collection with his fellow Teen Wolf cast member Eaddy Mays, released in November 2012.


Sharman's television credits include a recurring role in two episodes of The Nine Lives of Chloe King as Zane (in which he appeared alongside fellow Teen Wolf cast member Colton Haynes), and roles in Inspector Lewis, Robin Pilcher's television film Starting Over and one episode of Judge John Deed. He also starred in Funny or Die's The Sexy Dark Ages with Shawn Pyfrom and Robert Englund.

Currently, Daniel Sharman had a recurring role as werewolf Isaac Lahey in season 2 of MTV's supernatural drama series, Teen Wolf. He reprised his role in season 3 of the show, which began broadcasting in 2013, and became a regular character. Producer Jeff Davis has stated that he will be a big part of season 3. Season 3 started shooting on December 3, 2012.


He will also be playing the role of a royal Canadian mountie, Edward Montclair in the Hallmark Channel TV film When Calls the Heart, based on Janette Oke's romance novel of the same name. Sharman will star in The Beauty of Sharks with Bill Nighy, Sharon Stone and Faye Dunaway, releasing in 2013, in which he portrays two roles: Samuel Hamilton, and a woman. He told Nylon magazine, "In The Beauty of Sharks I do something I've always wanted to do, which is play a woman. I look pretty bloody good--I hate to toot my own horn but I think I'd pull."

5. The Quality of Mercy (2009)
View all Daniel Sharman movies

4. When Calls the Heart

Cleopatra voted for an image 1 week, 3 days ago

Majandra Arterton added this to a list 1 year, 5 months ago
You need my love on replay (202 person items)

angy91 voted for an image 2 years, 4 months ago

Likho voted for an image 3 years, 7 months ago

matt voted for an image 3 years, 7 months ago

fanlady voted for 6 images [View All] 3 years, 8 months ago

Rachel added this to a list 3 years, 10 months ago
Sexiest Men (650 person items)

Rachel added this to a list 3 years, 10 months ago
British Actors (211 person items)

Alea posted a image 4 years ago

lalabellexoxo added this to a list 4 years, 6 months ago
My Hottest Men In Entertainment List 2016 (373 person items)

lalabellexoxo added this to a list 4 years, 6 months ago
Babes Of The Walking Dead (79 person items)

angy91 voted for an image 6 years, 4 months ago