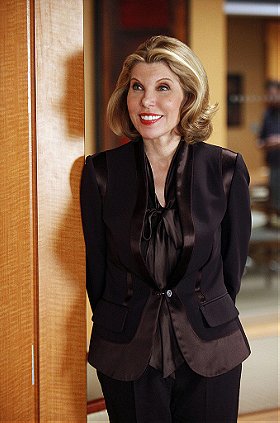 Baranski was born in Buffalo, New York, the daughter of Virginia (née Mazurowski) and Lucien Baranski, who edited a Polish-language newspaper.She is of Polish descent and her grandparents were actors in the Polish theater.Baranski attended high school at the Villa Maria Academy in Cheektowaga, a suburb of Buffalo.She then studied at New York City's Juilliard School (Drama Division Group 3: 1970–1974)where she graduated with a Bachelor of Arts degree in 1974.

Baranski made her Off-Broadway debut in Coming Attractions at Playwrights Horizons in 1980, and has appeared in several Off Broadway productions at the Manhattan Theatre Club, starting with Sally and Marsha in 1982.

Baranski made her Broadway debut in Hide & Seek in 1980. For her next Broadway performance, in Tom Stoppard's The Real Thing, she won the 1984 Tony Award Best Featured Actress in a Play. Other Broadway credits include: Hurlyburly, The House of Blue Leaves, Rumors, Regrets Only, Nick & Nora, and the Encores! concert staging of Follies.

At the Kennedy Center in Washington, D.C., Baranski starred as Mrs. Lovett in Sweeney Todd in 2002 (for which she won the 2003 Helen Hayes Award for Outstanding Actress in a Musical) and as the titular Mame in 2006.

In her first Broadway production since 1991, she was featured as the maid "Berthe" in the 2008 revival of Boeing Boeing.The show garnered two Tony Awards, one for Best Revival of a Play and the other for Best Actor (Mark Rylance). The original cast was Bradley Whitford (Bernard), Kathryn Hahn (Gloria), Christine Baranski (Berthe), Gina Gershon (Gabriella), and Mary McCormack (Gretchen). The show closed on January 4, 2009.

She also appeared in a one night only concert benefit performance of Stephen Sondheim's A Little Night Music for Roundabout Theatre Company as Countess Charlotte Malcolm on January 12, 2009.The cast included Vanessa Redgrave, Natasha Richardson, Victor Garber, and Marc Kudisch, among others.

Zippyjet voted for an image 1 year, 6 months ago

Zippyjet voted for an image 2 years, 7 months ago

IsabellaSilentRose added this to a list 2 years, 8 months ago
Tony Awards 2018 (32 person items)

compcua added this to a list 2 years, 10 months ago
Who's the best Charlotte La Bouff ? (61 person items)

TrekMedic voted for an image 2 years, 12 months ago

Emmabell added this to a list 3 years, 11 months ago
Actors Who Can Sing (291 person items)

TrekMedic voted for an image 3 years, 12 months ago

Emmabell added this to a list 3 years, 12 months ago

Zippyjet voted for an image 4 years, 3 months ago

lechat voted for an image 4 years, 4 months ago

lechat voted for an image 4 years, 5 months ago

""Audrey Hepburn's face was made for the camera." Christine Baranski, american actress. "