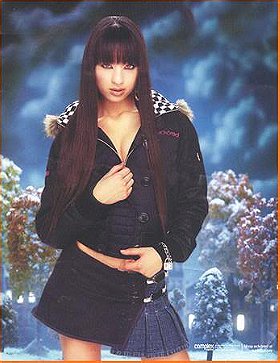 149 votes
she could kick your ass (56 items)
list by wildflower
Published 10 years, 6 months ago

She was born in Tsuchiura, Ibaraki Prefecture. Chiaki was one of the most popular models of the mid-1990s child model boom in Japan. In 1997, she appeared in her break in the photobooks Shinwa-Shoujo (Girl of Myth) and Shoujokan (Girl's Residence), photographed by Kishin Shinoyama. Shinwa-Shoujo became a best-seller but, as it contained some nudity, was discontinued by the publisher in 1999 after the institution of new anti-child pornography laws. She also posed as a model for the child fashion magazines Nicola (1997-2001) and Puchi Lemon (1996-2001).

She first achieved widespread recognition as an actress in Japan for her starring roles in the horror films Shikoku (1999) and Ju-on (2000). Chiaki also appeared in the action film Battle Royale (2000) in the role of Takako Chigusa.

Following feature appearances on several notable Japanese television programs (including Rokubanme no Sayoko), Chiaki made her Hollywood debut in director Quentin Tarantino's 2003 film Kill Bill, Volume I as Gogo Yubari, the manriki-wielding schoolgirl yakuza bodyguard of Tokyo mob mistress O-Ren Ishii. Chiaki's lines in the film were all in Japanese (except for two words, "bingo" and "hi"). She has stated that she is in the process of learning English and hopes to play more English-language roles in the future.[1]

Chiaki's other film appearances include major roles in the samurai drama Azumi 2: Death or Love and Takashi Miike's Yokai Daisenso.

IchBinEinNerd added this to a list 5 months, 3 weeks ago
Standout Beauties (1291 person items)

donpa voted for 2 images 6 months ago

cekadidas voted for 41 images [View All] 12 months ago

cekadidas voted for an image 12 months ago

maudraum777 voted for an image 1 year ago

PulpRoman added this to a list 1 year, 2 months ago

torduli voted for 7 images [View All] 1 year, 2 months ago

Henny voted for an image 1 year, 5 months ago

SomeBloke voted for 7 images [View All] 1 year, 7 months ago

Maracllea added this to a list 1 year, 10 months ago

"As Gogo Yubari in Kill Bill "

lcosta90 added this to a list 2 years, 4 months ago

jojoba voted for an image 2 years, 6 months ago

malir posted a image 3 years ago

george posted a comment on this image 3 years, 1 month ago

compcua added this to a list 3 years, 1 month ago
Beautiful Women (854 beauty items)

compcua added this to a list 3 years, 1 month ago
Who's the best Princess Anastasia ? (58 person items)