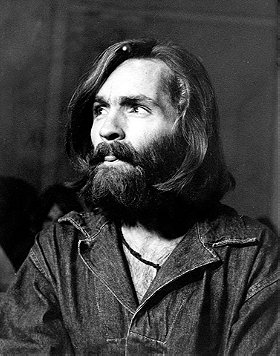 187 votes
Scum of the Earth: The Most Hated People Ever (13 items)
list by Severin Severin
Published 9 years, 8 months ago

4. How to Make a Monster

2. Lie: The Love And Terror Cult

5. The Way of The Wolf
View all Charles Manson music

2. Lie: The Love And Terror Cult

1. Manson in His Own Words: The Shocking Confessions of 'The Most Dangerous Man Alive'

1. Manson in His Own Words: The Shocking Confessions of 'The Most Dangerous Man Alive'

1. Ten Monologues from the Lives of the Serial Killers (1994)

1. Ten Monologues from the Lives of the Serial Killers (1994)

"SO there's no doubt in question I've been a lil' gone from the website for quite some time, you'll notice I've been a lil' lazy with some of my work, letting things slide and not getting around to things all that quick anymore. I couldn't feel more d'oh! about neglecting to send out holiday wishes on quite a few occasions. Y'all know how much I LUV Halloween. I've been dealing with quite a HEAP of offline personal shit in my life for the past few years or so, and there's FAT CHANCE of it likely"

Brian G added this to a list 4 years, 5 months ago

"Manson was arrested in October 1969 on unrelated charges, but hasn't been freed since. In 1971 he was convicted of first degree murder and sentenced to death, which was commuted to life in prison after California temporarily banned capital punishment in 1972. He's periodically spoken to the media – including to Rolling Stone in 1970 and 2013 – and has been denied parole 12 times, most recently in 2012. Currently 81 years old, he's next up for parole in 2027.  Charles Milles Manson, cul"

No te importa, bro added this to a list 4 years, 8 months ago
Infames (36 person items)