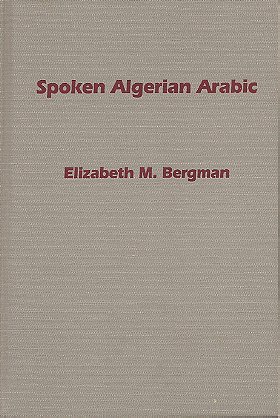 astro_man23
Spoken Algerian Arabic is roughly divided into three major sections: a grammar, a collection of 36 audio-transcriptional selections, and a glossary. The book uses both IPA style transliteration as well as semi-vowelled Arabic script, but it relies heavily on the IPA in the grammar section. The author makes it clear that the book is intended for students with prior experience in MSA and at least on... read more
View all Spoken Algerian Arabic reviews
This work is made up of three parts. The first part is a grammar sketch that describes the distinguishing features of Spoken Algerian Arabic (SAA). The second part of the work consists of sample conversations transcribed from SAA audio recordings. An English translation follows the SAA selections along with glossary of both Arabic and French terms that occur in each selection. The third part is a two-part glossary that lists Arabic and French words and phrases that occur in the audio selections. The first part of the glossary consists of Arabic terms and the second part French terms.
Manufacturer: Dunwoody Press
Release date: 30 July 2005
ISBN-10 : 193154610X | ISBN-13: 9781931546102
My tags: