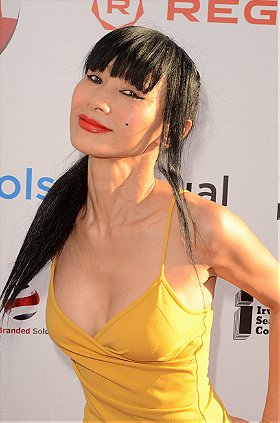 Bai Ling was awarded the Asian Oscar for her daring, brilliant performance in her first Hong Kong film Dumplings. Her performance also earned her an additional 3 major awards in the Far East. She received the Spirit Diversity award by The Hollywood Motion Picture Association. Her film Southland Tales (2006), directed by Richard Kelly was in competition at the Cannes Film Festival.

Bai just starred in and executive produced the movie Shanghai Baby. She has also recently completed 8 movies and most proudly worked with Taylor Hackford in Love Ranch (2010), co-starring with Helen Mirren and Joe Pesci, which just premiered in US. Bai also starred in a crazy role in worldwide release Lionsgate comedy action Crank: High Voltage (2009) with costar with Jason Statham. And just finished her first 3D film Back 2 Hell.

Had a four line appearance in Star Wars: Episode III - Revenge of the Sith (2005). Unfortunately her appearance (along with a small cameo of George Lucas's daughter) got cut out (G. Lucas: "It wasn't like it was a major thing to begin with and I just cut that whole secondary story out of the movie quite a while ago").


Member of jury at the Berlin International Film Festival (Berlinale) in 2005; for her light dresses that didn't always cover her essentials all the time, German tabloids nicknamed her "die Berlinackte" ("the Berlinaked").


Claimed that her role on Star Wars: Episode III - Revenge of the Sith (2005) was cut during editing because of her posing for the June 2005 issue of US "Playboy" magazine. She was the first woman from the People's Republic of China on its cover. George Lucas strongly denied that this was the reason she was cut.


Cut off most of her waist-length hair for her role in Anna and the King (1999).


She turned in one of the most acclaimed performances for her first Hong Kong movie Three... Extremes (2004) ( "Three Extremes: Dumplings"). Her character is a creepy 60 year old ageless beauty, and she helps women by performing illegal abortions, but she also uses the unwanted fetuses to be made into dumplings which is her secret for ageless beauty.


arrested for shoplifting at Los Angeles International Airport on February 13, 2008.

2. The Magnificent Raiders of Dimension War One (2021)

1. My Quarantine Romance with Toilet Paper

1. My Quarantine Romance with Toilet Paper

suretuj voted for an image 2 days, 22 hours ago

aLittleTyger voted for an image 2 months ago

Dj Levels voted for an image 2 months, 2 weeks ago

Agirl voted for an image 3 months, 1 week ago

Hog Wild voted for an image 4 months ago

donpa voted for an image 5 months, 1 week ago

donpa posted a image 6 months ago

coffee-boy voted for an image 6 months, 2 weeks ago

GP79 voted for an image 7 months ago

donpa voted for an image 7 months, 1 week ago

donpa added this to a list 9 months, 2 weeks ago
Favorite Person (28 person items)

Campagnola voted for an image 1 year ago

donpa posted a image 1 year ago

donpa voted for 2 images 1 year ago