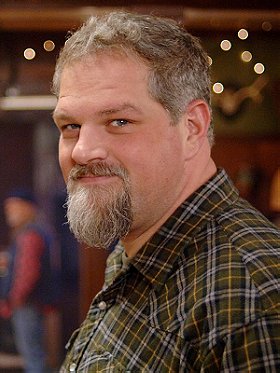 1 vote
View all Abraham Benrubi pictures
Abraham Rubin Hercules Benrubi (born October 4, 1969 in Bloomington, Indiana, USA) is an actor best known for his regular appearances as "Jerry Markovic" on the long-running U.S. TV drama ER, and his first role as 'Larry' Kubiac, one of the stars, of the early 1990s series Parker Lewis Can't Lose. Abraham's Father is a celebrity in his own right. Asher Benrubi is also known as "Smash" on 97.1 FM Talk Radio in St. Louis. At one time he was a V-Jay for MTV and earlier in his career fronted a successful AOR band from Indianapolis, Indiana called Roadmaster during the 1970's.
Tags: Actor (1), Beard (1), Born 1969 (1)
My tags:

Defenestrated Jack added this to a list 1 year, 9 months ago

Defenestrated Jack added this to a list 1 year, 10 months ago

MurdererX voted for an image 2 years, 11 months ago

IsabellaSilentRose added this to a list 5 years, 9 months ago