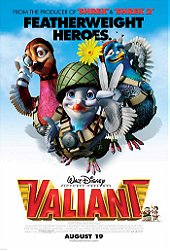 This film had so much potential, the concept is fantastic, the animation was superb, but sadly the writing was an unfunny and shallow as a puddle of dishwater.

Ricky Gervais proved to us all that he is not a comic, but a comic actor and could do nothing funny with the Christmas cracker jokes the writing team threw at him.

The main character of Valiant, played by Ewan McGregor was boring, impassionate and..again, unfunny. I wanted desperately to like Valiant; the brave war hero, but every fibre of me wanted to see him shot from the sky and eaten by the SS. The main character seemed just too young and innocent, nobody wants to see that in a war film, which 'Valiant' essentially is.

It’s great to see all the best of British put into this film, Hugh Laurie, John Cleese, Jim Broadbent, John Hurt and Tim Curry. If they'd all sat in a room and TALKED about the war it would have made a better film.

War movies in particular need to have a set of interesting and likeable main characters. Most notably to make you want them to succeed. With two Geordie imbeciles, a fetted coward, a sheltered child and effeminate Lord, who cares if they live or die?

My Favorite Sci-Fi Movies by coroner

My Favorite Romance Movies by almaseletiva

Best movies of 2014 by Noodles