Much too hated... A true masterpiece! 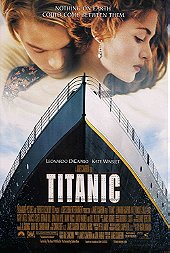 "It's been 84 years, and I can still smell the fresh paint. The china had never been used. The sheets had never been slept in. Titanic was called the Ship of Dreams, and it was. It really was."

With its budget said to have exceeded a whopping $200 million, James Cameron's Titanic was the most expensive motion picture in history upon its 1997 release. During production, the cards were heavily stacked against the movie; it starred commercially unproven actors, the story was derided as a Romeo and Juliet rip-off, and the film ran over-budget. Yet, nothing but phenomenal success welcomed Titanic - it eclipsed expectations, dominated the Academy Awards, and earned over $1.8 billion at the worldwide box office, making it the highest grossing film in history at the time. (The record was only beaten by Cameron's follow-up project, 2009's Avatar.) Grand in scope and emotion, Titanic proves that epic sagas in the tradition of Lawrence of Arabia and Ben Hur are not a thing of the past, and can still be successful and profitable in a modern age. 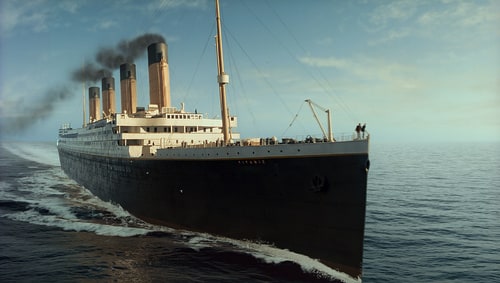 In April 1912, the "unsinkable" R.M.S. Titanic struck an iceberg and sank in the Atlantic Ocean during its maiden voyage, claiming the lives of 1,500 people. Titanic does not open in 1912, however - it begins in the late 1990s, when a salvage expedition is underway to recover a priceless diamond thought to have gone down with the famous ship. When the team recovers a drawing from the wreck of a young woman wearing the diamond, the discovery catches the eye of 100-year-old Rose Calvert (Gloria Stuart), who claims to be the female subject of the artwork. On a visit to the research ship over the wreck, Rose is drawn into telling her personal account of Titanic's ill-fated maiden voyage. Engaged to wealthy millionaire Caledon Hockley (Billy Zane), the youthful Rose DeWitt Bukater (now played by Kate Winslet) boarded the Titanic utterly bored with the life she was forced into. While contemplating suicide in a moment of desperation, Rose meets third class passenger Jack Dawson (Leonardo DiCaprio) who compels her to reconsider. In following days, a romance begins to form between them, but it is placed in jeopardy due to the class separation. Not to mention, further peril emerges when the Titanic strikes an iceberg on that fateful night.

Short of discovering time travel, James Cameron's Titanic is the closest that any film-goer will get to exploring Titanic's decks. In each of his prior motion pictures, Cameron - who is a very hands-on filmmaker - has continued to push the special effects envelope in groundbreaking and inspiring ways. Clearly, each film for Cameron is not just another day at the office but another revolutionary breakthrough for cinema, and Titanic continues this tradition. From bow to stern, the unsinkable Titanic truly comes alive in breathtaking and awe-inspiring ways, blurring the line of what's real and what's digital through a seamless combination of enormous sets, model work, and flawless computer-generated imagery. At no point will viewers be consciously aware that digital effects are on the screen, which is a tremendous feat for a late-'90s film. It's impossible to overstate how flawless the recreation of the ship truly is, and the illusion is never broken - we always feel as if we're aboard the real Titanic. At certain times, Cameron even inserted genuine footage of the Titanic wreck lying on the bottom of the ocean floor, contributing to the sense of verisimilitude surrounding the production. 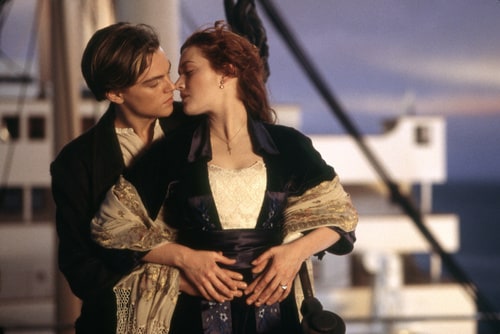 Many people understandably chortled at the prospect of a $200 million feature film with a foregone ending. However, while other cinematic retellings of the sinking of the Titanic were admittedly somewhat marred by a predictable narrative trajectory, Cameron's movie is about far more than an ocean liner sinking in the Atlantic Ocean. While some of the focus is on the disaster, Titanic is primarily a love story. Most blockbuster directors like Michael Bay prefer to use a thin story as an excuse for mindless special effects self-indulgence, but James Cameron uses special effects to serve his storytelling. Cameron is also a director able to generate emotional power amidst the spectacle, and Titanic reinforces this. It's challenging to not be genuinely invested in Jack and Rose's relationship by the time the iceberg enters the equation. Given that 2,200 souls were on-board the Titanic as she sank, it would have been easy to cram the film with lots of characters within lots of stories. However, the story of Jack and Rose is kept at the fore from beginning to end, and the camera only occasionally leaves their side for scenes of historical clarification.

During the sinking sequences, Cameron found time to craft some of the most powerful and emotionally devastating images of his career. Despite the rising water levels, Titanic's band continues to play on her decks, and the band's final tune - Nearer, My God, to Thee - gives way to a heart-wrenching montage. Also heartbreaking are the images of this absolutely beautiful ship being obliterated by the harsh ocean, such as the flooding of the Grand Staircase (and, for that matter, the breaking of the luxurious dome) and the ship's splitting. Most affecting of all, though, are the shots of hundreds upon hundreds of people thrashing about in the freezing sea, giving way to a field of floating, frozen corpses. Perhaps the most definitive touch was supplied by James Horner: the score. This epic tale required an epic score, and Horner was up to the task; providing an immaculate brew of intimate music for the quieter scenes, grandiose music to suit the sweeping imagery, pulse-pounding music to amplify the intensity of the sinking, and emotionally affecting music to underscore the tragedy of the fateful night. Anyone who watches this movie without getting a tear in their eye is a stronger man than this reviewer... 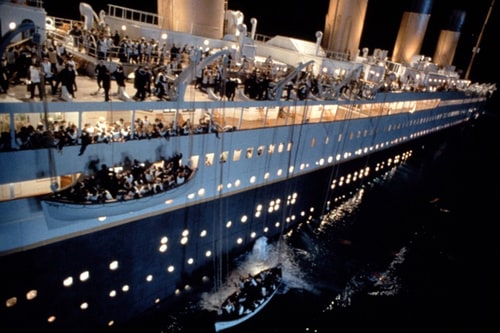 To commemorate the Titanic disaster's cententery, the film was given a 3D makeover. Cameron (ever the perfectionist) and his crew reportedly spent 60 weeks painstakingly converting the picture to 3D frame-by-frame, and the results breath amazing new life into this 15-year-old film. This is the greatest 3D conversion seen to date; the film genuinely looks as if it was shot natively in 3D. Furthermore, the third dimension is not just a gimmick since it actually enhances the film. The decks and hallways of the ship look longer and more vast (it's terrifying to watch Rose frantically navigating the labyrinthine hallways below deck as the ship sinks), and it seems like the ship is right there in front of us through a window. The 3D encourages you to absorb the countless layers of visual information as well, allowing you to detect intricate details you've probably never noticed before. Indeed, the Titanic comes alive like never before, and the scenes of its demise are even more breathtaking than they were 15 years ago. You cannot afford to miss the 3D experience.

Titanic is often criticised for not focusing enough on historical detail. Admittedly, there are a few inaccuracies (the collapsible boats were inaccurately constructed here, for instance), while the stories of both the Californian (a ship in eyesight of the Titanic as she sank) and the Carpathia (a ship which answered the Titanic's distress call but did not arrive in time) were omitted. And this is fine - the aim of Cameron's movie was not to provide the definitive retelling of the disaster, but to tell an account of the Titanic's sinking from a certain vantage point. The camera never leaves the decks of the doomed ocean liner as she sinks, which is beneficial for both the pacing and the building of intoxicating tension. 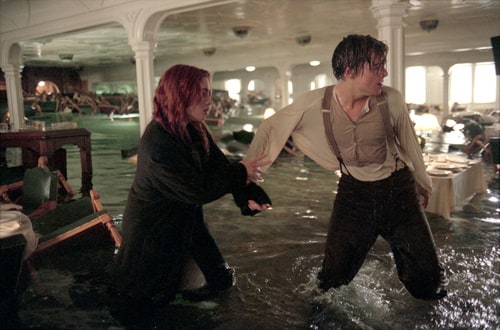 In the lead roles, Leonardo DiCaprio and Kate Winslet are both utterly flawless. As Jack Dawson, DiCaprio is likable, energetic and passionate, all of which were vital characteristics for bringing the part to life. Meanwhile, Winslet (who espouses a believable American accent) is stunning as Rose - the actress always appears completely focused and committed to the material. Alongside this pair is Billy Zane, who's a convincing villain; snobby, arrogant and dislikeable. He was joined by the equally commendable David Warner (who was in the TV mini-series S.O.S. Titanic in the '70s) as his no-nonsense manservant. The supporting cast, most of whom star as characters from history, is excellent from top to bottom, including Bernard Hill as the Captain E.J. Smith and Walter Garber who makes for a very convincing, likable Thomas Andrews. Also worth mentioning is Kathy Bates whose performance as "The Unsinkable Molly Brown" never strikes a false chord, and Jonathan Hyde who paints a wonderfully conceited portrait of Bruce Ismay.

It's unfortunate that Titanic gets a lot of hate, and is frequently belittled as a lousy, cheesy chick flick. The criticisms are completely unfounded and unfair, as this is a wonderful motion picture which deserves its success and acclaim. However, in spite of its strengths, Titanic is not perfect. There are illogicalities (Rose knows of Sigmund Freud's work, yet it was not translated into English until a number of years after the disaster), some blatant technical faults (apparently this is the most goof-ridden film of all time) and a smattering of cheesy melodrama. More information about the science behind the sinking would have been valuable as well. Although it is possible to overlook these faults while experiencing this glorious motion picture, I cannot brand Titanic with a 5-star rating and call it perfect. I may love the movie, but I am a realist. 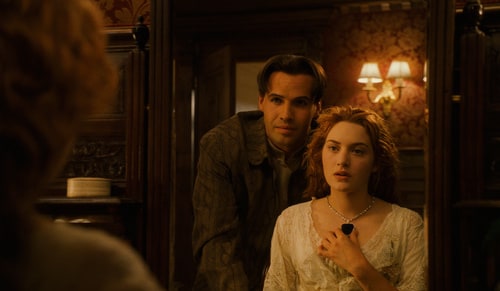 A dud ending could have destroyed Titanic, and the odds were against Cameron in this respect. After all, how could he possibly give satisfying closure to the story of a tragic disaster wrapped around such an affecting romance fable? Fortunately, the proceedings close with a beautiful, emotionally resonant scene that does the film justice and reverberates across the happenings of the past three hours. All things considered, James Cameron's Titanic is a dazzling work of cinematic art, and a remarkable mixture of style and substance. It runs for a daunting three hours, yet the time flies by with immaculate brevity. Most may not regard this as the best telling of the story of the Titanic disaster to date, but it's inarguably the most memorable and spectacular. After watching Titanic, you'll be in awe of the visual experience and teary-eyed because of the enormous emotive power as large as the ship itself.