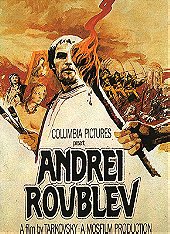 After watching ‘Ivan’s Childhood’, I was quite eager to further discover Andrei Tarkovsky and this movie was the obvious next step in this journey. Well, if Tarkovsky might be the most difficult director I know, this might be his most inscrutable directing effort so far (on the other hand, I have seen only 3 of his movies and I’m slightly worried about what will happen with the rest of his work). It’s rather funny, afterwards, I checked IMDb to get some insights about this really opaque movie and, very often, you would get many fans telling you that it is the greatest Soviet epic ever made but none of them explained what was actually so great about the damned thing. At least, it was definitely a step up from ‘Ivan’s Childhood’ and there is no doubt that Tarkovsky became really ambitious with this following directorial effort. On the other hand, if I thought that ‘Ivan’s Childhood’ was not really straightforward, this movie was even more complicated and, to be honest, it was pretty much impossible to follow. Seriously, for 3 hours long, I was watching my screen, scratching my head, wondering what the hell was going on. Eventually, it was only about 12 hours after I watched this movie that I finally got some kind of revelation. Seriously, it is something I experienced only with this director. Basically, beyond giving a rather ghastly look on medieval Russia, Tarkovsky gave us the most deglamourized biopic you will ever see. Indeed, Andrey Rublev was very often not even the main character during the events that took place. In my opinion, this approach was to show that, even the greatest artists, after all, are just as human as everyone else. Like the rest of us, they are some mere spectators during all the tragic events during their lifetime, drifting into the chaos that life can be for each and everyone of us. Concerning the (completely random) episode with the guy with this hot balloon during the prologue or the impressive sub-plot about this kid building up a bell while having no actual knowledge about it, I think it was to display that, even though we are all humans, we should still strive to reach the impossible, which is basically what all Art is, because it is during such moments that we are the closest to actual divinity. Anyway, to conclude, the damned thing was extremely tough on me but even if it was rather frustrating, it is still definitely worth a look, you really have to dig this genre though.