Dr. Strangelove or: How I Learned to Stop Worrying and Love the Bomb review
1010 Views 1 Comments
6

Brilliant satirical comedy about the Col 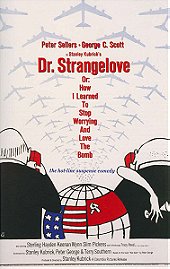 Not having grown up in the black & white era, I can't say I'm normally a fan of old classics, yet this movie compelled me. It's one of the most satirical black comedy I've ever seen, dealing with a topic that was very sensitive to people at the time; Nuclear War with the USSR.

It centres around a US General that has lost his sanity and single-handedly issues a code to all the B-52 bombers in the air to head towards their prime targets inside the USSR to drop nukes, and then commands them to shut down all communications.

The suspense builds as the US president, his top General played by a brilliantly funny George C. Scott, and the chiefs of staff, as well as the Russian ambassador, are trying everything in their power to establish communications with the planes, and failing that, to plan for full scale nuclear war.

This is quite easily Kubrick's greatest comedy, and examines the consequences if we give too much power to leaders that are all too often insane.

I highly recommend this to everyone, no matter your age. In some ways, it applies to present day warmongering of nations just as much as it did back during the Cold War era.