I am Jack's Half Baked Review 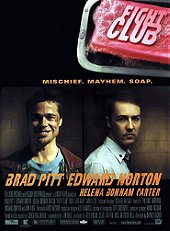 The Indie film has become more and more popular as the years go on. Blockbusters and high concept movies are losing their appeal as favourite films because the audience strives for a deeper meaning and an alternative look on the big screen. Being a teen in the late 90s, this is one of the first films that stood out for me in the Indie bracket.

So, David Fincher directed an adaptation of Chuck Palahniuk book Fight Club. Jack (Ed Norton) is a man who lacks any kind of lift in life. Stuck in middle management and suffering from insomnia, his life is a complete waste as he is overcome by consumer culture and no longer enjoys anything that he isn’t told to like. That is, until he meets a confident and inspiring Soap Salesman known as Tyler Durden (Brad Pitt); who teaches him more about being a man than any self-help book could ever do.

The film has a lot of commentary on maculinity which you couldn't help but notice through every scene. Tyler Durden is a somewhat accurate representation of modern masculinity. He has a scruffy but well preserved appearance which makes him stylish but not enough to make him look like he cares about his looks. However, actively starting fights and enjoying getting beaten up shows that he is a sadist and a masochist, which makes him quite the oddity and contrast. Furthermore, he doesn’t need or want anyone to provide for and so being the head of a nuclear family isn’t his goal (unlike traditional man). Creating a fraternity for like minded men is his link to being the breadwinner of his societal archetype. It can go as far as to say that Tyler Durden is so masculine that he doesn’t need what a normal man wants, which is possibly why Jack wants to be him. Little does he know...

The film can also be seen as postmodern as it is self-aware. There are times when Jack and Tyler talk to the audience, breaking the fourth wall, explaining what they are doing and so forth. Using the subliminal penis shot throughout the film and explaining how it is done is teaching the audience that the characters are aware they are in a film and performing for the sake of the movie. Something of an early mindf*ck but was a rather entertaining addition.

The narration, as well as explaining the narrative for the audience, rewinds and fast forwards itself to what Jack says and so creates an MTV-like *groan* effect where everything is explained in due course. In terms of genre, there are no clear lines of what the film can be classed as. It shares conventions with the thriller and with certain crime dramas but there is nothing for sure, which further classes Fight Club as a post modern text. Even though it was an early 'mainstream indie' it managed to rock conventions beyond what anyone could have expected at the time.

I think for me, the soundtrack was quite unforgettable. Even now, I don't recollect the film when I hear any of the songs. I think this was the main flaws of the film. The tracks were just thrown in for the sake of making the film more alternative. Maybe it was just there to make you feel a sense of unbelonging which Jack himself felt. But thats probably a load of shit.

One of the last great films of the 20th century and a must see for anyone with a penchant for the weird, wonderful and whimsical.

Best albums of 2010 by the giraffe

Movies That Made Me Cry by becks