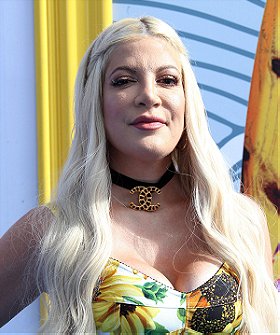 A 16-year-old Tori made her big-screen debut with a small part in 1989's Troop Beverly Hills. A guest-starring appearance in a 1990 episode of the popular teen sitcom Saved by the Bell (starring a young Tiffani-Amber Thiessen) earned her a Young Artist Award. That same year, Tori was cast in the role that would make her a household name (at least for the under 20 demographic); she won the part of "Donna Martin" in Beverly Hills, 90210. Despite denials from Aaron Spelling, it was widely speculated that Tori was hired due to her father's position as the show's producer, which harvested some unfavorable comments about the actress over the next few years.

Tori Spelling would go on to play the materialistic Beverly Hills princess for the duration of the '90s, and made guest appearances on other shows like Parker Lewis Can't Lose, Melrose Place (another Spelling production) and Blossom. Roles in made-for-TV movies supplemented her series work; Spelling portrayed a spoiled cheerleader in 1994's A Friend to Die For, and followed up this performance with parts in 1995's Awake to Danger, and 1996's Mother, May I Sleep with Danger?, Deadly Pursuits and Co-ed Call Girl.

Spelling returned to the big screen in 1997 to co-star in The House of Yes. The film premiered at the Sundance Film Festival, and for the first time in her career, Tori received some favorable reviews. She followed this up with a cameo in Scream 2 (1997), where she poked fun at her own image in the film-within-a-film segment. Despite positive reviews for both screen appearances, she still received a Razzie nomination for Worst New Star, for her role in The House of Yes. Tori lost out (or, depending on how you look at it, won) to Dennis Rodman.

She continued to pursue film roles as 90210's run was winding down. It was rumored that she had plans to leave the series in its tenth season, and landed a supporting role in another Sundance hit comedy, Trick (1999), in which she portrayed a dubiously talented singer/actress. Once again, she received generally favorable reviews, and was nominated for a Golden Satellite Award for Best Performance by an Actress in a Supporting Role.

5. Mother, May I Sleep with Danger?
View all Tori Spelling TV (80 more)

Look Left voted for an image 11 months, 3 weeks ago

L90 added this to a list 1 year, 1 month ago
Women Who Rock Wearing Pants at Red Carpet (1058 person items)

L90 added this to a list 1 year, 5 months ago
Women Who Rock Wearing Pants at Red Carpet (1058 person items)

dume2a voted for 2 images 3 years ago

Queen of Horror added this to a list 3 years, 4 months ago

Guest Stars on Saved By The Bell (32 person items)

Leo added this to a list 3 years, 8 months ago
Celebrities Who Regret Having Plastic Surgery (10 person items)

Minerva13 voted for an image 4 years, 7 months ago

Zippyjet voted for an image 5 years, 4 months ago