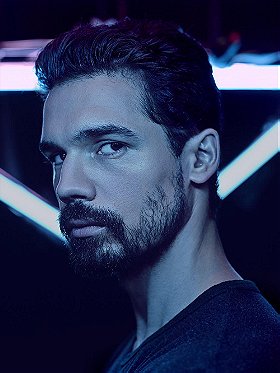 88 votes
The People Behind The Mask (11 items)
list by Gaby
Published 8 years, 2 months ago

Strait was born and raised in Greenwich Village, New York City, New York. He is of half English and half Italian descent. He attended Xavier High School and took classes at the Stella Adler Studio of Acting. During his teen years, Strait modeled for L'uomo Vogue, Spoon magazine, Details, Surface, Hollister Co., and Pop magazine, and worked with photographers Bruce Weber, Herb Ritts, and Ellen von Unwerth. Weber featured Strait in his 2001 book, All-American: Short Stories.

Strait began taking acting lessons at the age of eleven. In the sixth grade, he began to take performing classes at the Village Community School. Although forced into it at first, he found a passion for acting after he performed live for the first time. He has worked at the Stella Adler Acting Studio and the Black Nexxus Acting Studio in New York City.

In 2004, he moved to California to pursue a career in acting. After his first audition he received an acting job, and in 2005, he debuted in his first movie, Sky High where he played a teenage superhero named Warren Peace. He covered The Fixx song "One Thing Leads to Another" for the film's soundtrack.

His next movie appearance was alongside Ashlee Simpson (in her movie debut) and Pell James in Undiscovered, a movie about young actors in the entertainment industry who want to become stars. In 2006 he starred as Caleb Danvers in The Covenant, a horror/thriller film which opened on September 8, 2006. Strait appeared opposite Camilla Belle in 10,000 BC, a film about prehistoric Earth, released in March 2008. He plays a young mammoth hunter D'Leh as he travels through unknown lands on a quest to rescue his people from slavery.

He appeared in the 2008 movie Stop-Loss as Michael Colson.

Strait started as the singer for Invidia, a death metal band from New York City. The band was composed of Riyaad Edoo (Ambient Death) along with Lukasz Gunia, Michael D'Andrilli (The Tribe), and Geoff Toelocca (The Tribe). Steve was asked to leave the band when his vocal style and performance was not on par with the rest of the band. Strait later formed The Tribe with Michael. However, due to Strait's upcoming movie roles, the band has moved on without him and are no longer working together. Steve has signed to Lakeshore Records and is scheduled to record and release a full length solo album.

minak34 voted for an image 1 year, 5 months ago

kingtetsuya voted for an image 1 year, 6 months ago

IsabellaSilentRose added this to a list 5 years, 6 months ago
Comic Con 2017 (227 person items)

IsabellaSilentRose added this to a list 6 years, 6 months ago
Comic Con 2016 (240 person items)