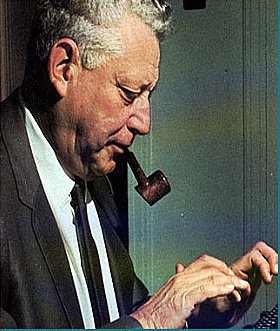 His first film as screenwriter was in 1937, and after military service in World War II he joined Paramount Pictures as a writer and producer on films such as The Big Clock and The Great Gatsby. Maibaum established a friendship with Alan Ladd and in addition to writing several screenplays for Ladd, Maibaum acted as a script supervisor for Ladd.

In the 1950s Irving Allen and Albert R. Broccoli were making action films in UK under their Warwick Films banner. When Broccoli signed Ladd on for a three picture deal for Warwick, Ladd insisted on Maibaum co-writing the screenplays. His working relationship with Broccoli would extend into the phenomenally successful James Bond series, with Maibaum contributing to the screenplays of all but three of the films from Dr. No in 1962 until Licence to Kill in 1989. However, his contributions to Licence to Kill were disrupted by a strike by the Writers Guild of America.

Although several writers usually worked on the Bond films, Maibaum usually wrote his drafts alone. The exception came towards the end of his career, when he would work directly with Michael Wilson.

On writing the Bonds Maibaum said "the real trick of it is to find the villain's caper. Once you've got that, you're off to the races and the rest is fun." ... (more) (less)
Tags: American (1), Deceased (1)
My tags:

2. Inside 'From Russia with Love'

3. Inside 'For Your Eyes Only'

4. Behind the Scenes with 'Goldfinger'

5. Inside 'A View to a Kill'
View all Richard Maibaum movies

1. Inside 'From Russia with Love'

3. Inside 'For Your Eyes Only'

5. Behind the Scenes with 'Goldfinger'
View all Richard Maibaum movies

browser posted a image 3 years ago