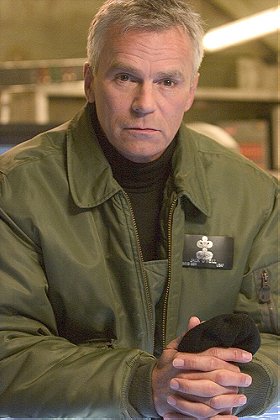 106 votes
The Greatest Guest Appearances on The Simpsons (200 items)
list by Exclusive
Published 6 years, 10 months ago

As a teenager, Anderson dreamed of becoming a professional hockey player as a teenager. But, at age sixteen, he broke both of his arms in separate incidents, the second of which was so bad that he had to be hospitalized for three months, putting paid to the dream of becoming a hockey player. He went hitchhiking on the open road via a 5,641-mile bicycle trip from Minnesota to Alaska. Although accompanied by several friends at the beginning of this trip, he traveled the last thirty-three days alone. This experience gave him a more centered sense of direction in his life.

After studying drama at St. Cloud State University and at Ohio University (without completing his degree), he briefly moved to New York before settling in Los Angeles, where he worked as a juggler and a street mime and in a Renaissance-style cabaret. He worked briefly in Marineland, where his jobs included holding fish in his mouth for killer whales to leap up and snatch. Subsequently, he appeared in plays and formed a rock band called "Rick Dean and the Dante" with his friend Carl Dante in which he sang and played the guitar.

His big break came in 1976, when he was cast in the popular daytime drama General Hospital (1963) as Dr. Jeff Webber. He continued to play the role for five years until he felt it was time to move on to prime-time drama. He made numerous guest appearances in series such as The Facts of Life (1979) and The Love Boat (1977) and was cast as the star in two CBS series, Seven Brides for Seven Brothers (1982) and Emerald Point N.A.S. (1983), but both lasted just one season.

His next big success came in 1985, when he won the role as the title character in the ABC adventure series MacGyver (1985). He was cast because the producers were impressed by the lack of pretension he showed at his audition. As he is nearsighted, it was necessary for him to wear his glasses for the reading. The series lasted seven seasons and ran for 139 episodes. It was hugely successful throughout its run and has continued to be popular all over the world. He reprised his role in two TV movies, MacGyver: Lost Treasure of Atlantis (1994) and MacGyver: Trail to Doomsday (1994), both produced by his own production company, Gekko Film Corp, which he co-founded with Michael Greenburg.

Having made a huge impression in Ordinary Heroes (1986) as a blind Vietnam veteran struggling to rebuild his life in the United States. After "MacGyver" ended he moved on to such made-for-television movies as In the Eyes of a Stranger (1992), Through the Eyes of a Killer (1992), Beyond Betrayal (1994), Past the Bleachers (1995) and Pandora's Clock (1996). He returned to series television in 1995, when he was cast as Ernest Pratt/Nicodemus Legend in Legend (1995), an adventure series that aired on UPN. He served as executive producer of the series, in which one of his co-stars was his close friend John de Lancie. His character was a dime novelist (Pratt) who took on the persona of the protagonist in his novels (Legend). The series was primarily a comedy, a blend of the western and science fiction.

He found major success again when cast as Colonel (later Brigadier General) Jack O'Neill in Stargate SG-1 (1997), an adventure/science fiction series based on the blockbuster Stargate (1994) starring Kurt Russell and James Spader. The series began filming in Vancouver on February 19, 1997, and premiered on Showtime on July 27, 1997 and on Fox Friday nights. The series has remained extremely successful since then, eventually resulting in the creation of a spin-off series, Stargate: Atlantis (2004), in 2004, and the now-canceled video game "Stargate SG-1: The Alliance" in 2005. Both series aired on the Sci-Fi Channel. He appeared, sporadically, in the latest spin-off series, Stargate Universe (2009). His role in the SG-1 series was substantially reduced in its seventh and eighth seasons, which culminated in his departure from the series in 2005.

Never married, he had dated many women including such actresses as Teri Hatcher, Lara Flynn Boyle, and Sela Ward as well as German ice-skater Katarina Witt. Since 1996, his partner has been Apryl A. Prose, mother of his only child, Wylie Quinn Annarose Anderson (born August 2, 1998).

Kandi voted for an image 6 months, 3 weeks ago

Kandi voted for an image 5 years, 2 months ago