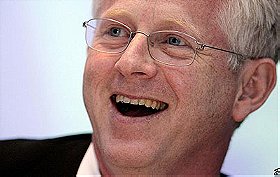 He began writing comedy after leaving Oxford University in 1978. While at Oxford, Mr. Curtis worked with Rowan Atkinson, and continues to do so. His first job on television was writing all four seasons of the BBC's Not the Nine O'Clock News. He then went on to write the Blackadder series, a situation comedy set in four different eras of British history, always starring Rowan Atkinson in a different amusing haircut. The last three seasons were co-written with Ben Elton. The show was recently voted the second most popular sitcom of all time in the U.K.

During these years, Messrs. Curtis, Atkinson, and Elton staged two comedy revues in London's West End; and Mr. Curtis wrote his first film, The Tall Guy, directed by Mel Smith and starring Jeff Goldblum, Emma Thompson (in her film debut), and Rowan Atkinson as a cruel, heartless comedian starring in a West End show. The film was not autobiographical and was produced by Working Title, the production company with whom Mr. Curtis has always worked since.

His second film, Four Weddings and a Funeral, starring Hugh Grant and Andie MacDowell, was directed by Mike Newell, produced by Duncan Kenworthy, and released in March 1994. The film won a French César, an Australian Film Institute Award for Best Foreign Film, and the BAFTA Award for Best Film. At the Academy Awards, the film was nominated for Best Original Screenplay and Best Picture.

In 1994, he was made a MBE and started writing The Vicar of Dibley, a situation comedy for the BBC, starring Dawn French as a female vicar in a small village suspiciously full of eccentric characters. The movie Bean, co-written with Robin Driscoll, directed by Mel Smith and starring Rowan Atkinson, opened in Britain at the end of August 1997.

Mr. Curtis' next film, Notting Hill, directed by Roger Michell and starring Julia Roberts and Hugh Grant, was released in May 1999 – and was, for a while, the highest-earning British film ever.

Mr. Curtis wrote and directed the 2003 film Love Actually, a story about lots of different kinds of love, set at Christmas and featuring 22 leading characters.

He wrote the 2005 television drama The Girl in the Café, based around the G8 summit, which received three Emmy Awards in 2006, including Outstanding Writing for a Miniseries, Movie or a Dramatic Special and Outstanding Made for Television Movie. The picture was directed by David Yates and starred Bill Nighy and Emmy Award winner Kelly Macdonald.

Mr. Curtis is co-founder and vice chairman of Comic Relief, the organization that runs Red Nose Day and Sport Relief in Britain. He began the charity after a trip to Ethiopia during the famine of 1985. He has co-produced the 10 live nights of Comic Relief for the BBC since 1987. Comic Relief has made nearly $1 billion for charity projects in Africa and the U.K.

He was a founding member of the Make Poverty History coalition; throughout 2004 and 2005, Mr. Curtis worked on the campaign and Live 8, which concentrated on trade justice, more and better aid, and debt cancellation for the world's poorest countries.

In April 2007, he was executive producer of Idol Gives Back for the Fox Network show American Idol. The shows raised more than $75 million for projects helping the poorest children and young people in the U.S.A. and Africa. Idol Gives Back received the Governor's Emmy Award in 2007.

5. DO NOT USE
View all Richard Curtis movies

3. How to be Your Own Literary Agent: The Business of Getting a Book Published