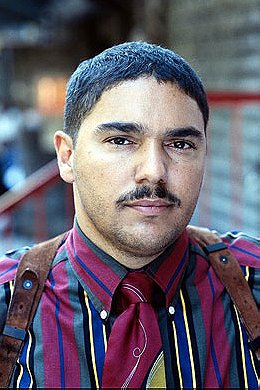 Nick branched out on his own after this and earned parts in the movies Federal Hill (1994) and Exceso de equipaje (1997), and garnered serious TV attention as rookie detective "James Martinez" on Policías de Nueva York (1993). His character was originally created as a foil to David Caruso star character, but he lost momentum after Caruso's early departure from the show. Still, he managed to hang around for seven seasons.

Very dark in tone and complexion, the compact-framed Nick certainly has had a wealth of experience in mob drama, playing a young Al Capone in one guest appearance, and assorted mobster types in other TV-movies. Plenty of guest-starring roles have also come his way with episodes of Ley y orden (1990), La ley de Los Ángeles (1986) and Más allá de los límites de la realidad (1985) and a recurring role on Turno de guardia (1999). He has lightened up on a rare occasion in such comedies as The Drew Carey Show (1995) and in a couple of failed pilots.

On stage, Nick has appeared in "Wild Goose", "The Resistible Rise of Arturo Ui" (with John) "Lusting After Popino's Wife" and "Siddown: Conversations With the Mob". Nick's never strayed too far from the family fold. He's appeared in a number of John's projects over the years that have also occasionally featured cousin Aida Turturro (from Los Soprano (1999) fame). His mother has also appeared in a few films, as has John's wife and sons. Nick remarried a number of years ago. ... (more) (less)
Tags: Actor (1), Fat (1), Do The Right Thing (1), Born 1962 (1), Famous Sibling (1)
My tags:

3. Do the Right Thing

1. Do the Right Thing