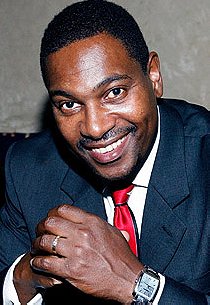 Williamson was born on March 4, 1957 in St. Louis, Missouri. He is the son of Elaine, a certified public accountant, and a father who was an Air Force Non-Commissioned Officer.

Williamson began performing at the age of nine. Along with acting, he also danced as an alternate member of The Lockers troupe on Soul Train along with Fred Berry (star of TV sitcom What's Happening!!). At age nine, Williamson relocated to Los Angeles with his family. While in high school he excelled in athletics, particularly football and basketball. However, acting was his first love and he pursued sports no farther than high school.

5. The New WKRP in Cincinnati
View all Mykelti Williamson TV

5. The New WKRP in Cincinnati
View all Mykelti Williamson TV

onclelapin posted a image 4 years ago

PulpRoman added this to a list 4 years, 5 months ago
Favourite Actor and Actresses (43 person items)

Leo added this to a list 6 years, 4 months ago

"Number One with a Bullet Con Air Species II"