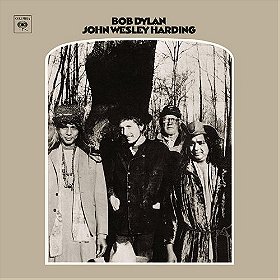 John Wesley Harding was exceptionally well received by critics and sold well, reaching No. 2 on the U.S. charts and topping the UK charts. The commercial performance was considered remarkable considering that Dylan had kept Columbia from releasing the album with much promotion or publicity. Less than three months after its release, John Wesley Harding was certified gold by the RIAA. "All Along the Watchtower" became one of his most popular songs after Jimi Hendrix's rendition was released in the autumn of 1968.

SchwarzerAbt added this to a list 1 year, 2 months ago
Albums: Best to Worst (331 music items)

Gauntlet voted for an image 2 years, 4 months ago

"Recorded in Nashville in three sessions, Bob Dylan's first album after the electric warfare of his 1966 tour and subsequent retreat to Woodstock was shockingly austere: an almost crooning Dylan with just a soft-shoe rhythm section and a few sighs of steel guitar. But that calm was a perfect contrast to the sermonizing fire be unleashed in "All Along the Watchtower" and the crossroads parable "The Ballad of Frankie Lee and Judas Priest." The moral fiber and martyr's temper in these songs were fie"

reviewbytrevor rated this 9/10 4 years, 4 months ago

JxSxPx added this to a list 4 years, 6 months ago

"John Wesley Harding goes for country over folk, despite using what are seemingly folk tales to couch its cryptic political allegory. The sound is straightforward, paving the way for country-rockers, but the words are knottier than ever. Standout track: “All Along the Watchtower”"

CD Smiles added this to wanted list 4 years, 8 months ago

brickbat added this to owned list 5 years, 1 month ago