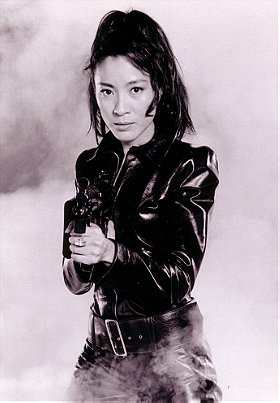 Yeoh is best known to international audiences for her role as the intense swordswoman in Ang Lee's Crouching Tiger, Hidden Dragon and as the charming secret agent in the James Bond hit Tomorrow Never Dies – but the Malaysian-born actress has been knocking audiences out in Asia for more than two decades. Since stepping into the action-packed Hong Kong film world in 1984, she has starred in more than 30 films and challenged traditional views of Asian women with her portrayals of strong female characters.

Yeoh clearly demonstrated that she is more than the world's action queen in Crouching Tiger, Hidden Dragon, in a performance that brought her Best Actress nominations at the Taipei Golden Horse Film Festival, the Hong Kong Film Awards and the BAFTAs. She was also named ShoWest's International Star of the Year in 2001. Yeoh received a Best Supporting Actress nomination at the 1997 Hong Kong Film Awards for her performance in the historical drama The Soong Sisters.

In 2002, Yeoh added another feather to her cap by producing and starring in The Touch, a contemporary romantic action-adventure. That same year, she was honored with a Montblanc de la Culture Arts Patronage Award in recognition of her achievement and commitment to nurture creative talents. She was named Producer of the Year by CineAsia and received The Outstanding Young Persons of the World Award by Junior Chamber International. She also produced and starred in the futuristic action-adventure Silver Hawk, in 2003.

In October 2007, Yeoh was conferred the honor of Chevalier of the National Order of the Legion of Honor by the president of France, in recognition of her contribution to the arts and cultural exchange between Asia and France.

2. Memoirs of a Geisha

1. Everything Everywhere All at Once

4. Memoirs of a Geisha

4. A Haunting in Venice

Nusch voted for an image 3 months, 1 week ago

lovedriver voted for an image 3 months, 1 week ago

SomeBloke voted for an image 3 months, 4 weeks ago

onclelapin posted a image 6 months ago

darakan72 voted for an image 8 months, 2 weeks ago

emerica voted for an image 8 months, 4 weeks ago

"Aleta Ogord• Arcturan, the leader of Aleta Ravager Clan.• Wife of Stakar Ogord and member of his team. "

darakan voted for an image 1 year, 3 months ago