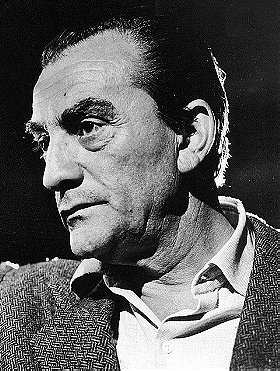 42 votes
Favorite directors, 3 masterpieces of each one (89 items)
list by jeffpsych
Published 7 years, 8 months ago

Born in a noble and wealthy family (one of the richest of northern Italyin) in Milan, at the age of 30 he went to Paris, and began his career as Jean Renoir's assistant in 1936, due to the intercession of the common friend Coco Chanel, in Une partie de campagne. After a short tour to the U.S., where he visited Hollywood, he was back in Italy to act as Renoir's assistant again for La Tosca (1939), a production that was interrupted and later completed by German director Karl Koch because of the war.

Together with Roberto Rossellini, Visconti joined the salotto of Vittorio Mussolini (the son of Benito, at the time the national arbitrator for cinema and other arts) and here presumably met also Federico Fellini. With Gianni Puccini, Antonio Pietrangeli and Giuseppe De Santis he wrote the screenplay of his first film as a director: Ossessione (Obsession) (1943), a neorealist movie.

Visconti was also a celebrated theatre director. During the years 1946-1960 he directed many performances of the Rina Morelli-Paolo Stoppa Company, with Vittorio Gassmann, and several operas.

In 1948, he wrote and directed La terra trema (The Earth Trembles), from the novel I Malavoglia by Giovanni Verga.

milica added this to a list 3 years, 11 months ago
Visconti Galore (9 movies items)

CD Smiles added this to a list 4 years, 3 months ago

"Priority Rocco and His Brothers"

Beroofficial added this to a list 4 years, 7 months ago