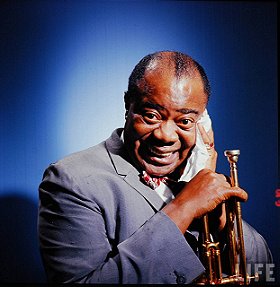 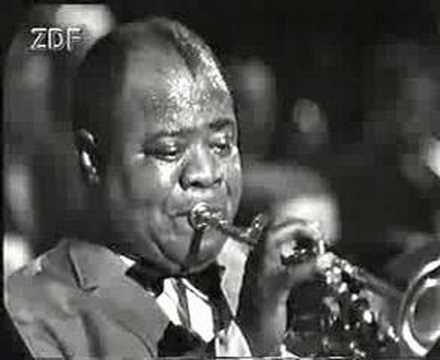 What a wonderful world - LOUIS ARMSTRONG.

Armstrong was born and raised in New Orleans. Coming to prominence in the 1920s as an inventive trumpet and cornet player, Armstrong was a foundational influence in jazz, shifting the focus of the music from collective improvisation to solo performance. Around 1922, he followed his mentor, Joe "King" Oliver, to Chicago to play in the Creole Jazz Band. In Chicago, he spent time with other popular jazz musicians, reconnecting with his friend Bix Beiderbecke and spending time with Hoagy Carmichael and Lil Hardin. He earned a reputation at "cutting contests" and his fame reached band leader Fletcher Henderson. Henderson persuaded Armstrong to come to New York City, where he became a featured and musically influential band soloist and recording artist. Hardin became Armstrong's second wife and they returned to Chicago to play together and then he began to form his own "Hot" jazz bands. After years of touring, he settled in Queens, and by the 1950s, he was a national musical icon, assisted in part, by his appearances on radio and in film and television, in addition to his concerts.

With his instantly recognizable rich, gravelly voice, Armstrong was also an influential singer and skillful improviser, bending the lyrics and melody of a song. He was also skilled at scat singing. Armstrong is renowned for his charismatic stage presence and voice as well as his trumpet playing. By the end of Armstrong's life, his influence had spread to popular music in general. Armstrong was one of the first popular African-American entertainers to "cross over" to wide popularity with white (and international) audiences. He rarely publicly politicized his race, to the dismay of fellow African Americans, but took a well-publicized stand for desegregation in the Little Rock crisis. He was able to access the upper echelons of American society at a time when this was difficult for black men.

1. What a Wonderful World

1. What a Wonderful World

Onion Jack added this to a list 1 month ago

Onion Jack voted for an image 1 month, 2 weeks ago

Kandi voted for an image 2 months, 3 weeks ago

Agent Kermit D. Fonz added this to a list 6 months, 2 weeks ago
Gone, but not forgotten (1318 person items)

lovedriver posted a image 7 months ago

lovedriver voted for 5 images 7 months ago

Sndi added this to a list 2 years, 8 months ago

unicornsugar added this to a list 2 years, 10 months ago
Famous Figures: The South (27 person items)

PCA added this to a list 3 years, 3 months ago
Músicos/Musicians. (144 music items)

lalabellexoxo added this to a list 3 years, 12 months ago
Music That Has Inspired My Writing (450 person items)

Dj Levels voted for an image 4 years, 4 months ago

MacGuffin voted for an image 5 years, 1 month ago