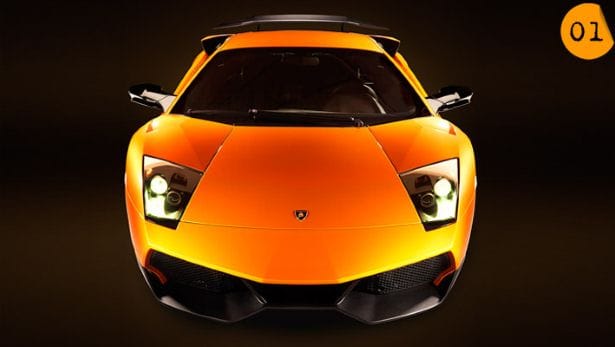 So our cards are on the table. Yes, it's ludicrously expensive. No, you can't really see out of it. Or get into it. Or drive it without the aid of an expert chiropractor. And yes, it's a bit flash and yes, you do have to have it in orange.

Scissor doors, mid-mounted 661bhp, 6.5-litre V12 (imagine that in the back of your Focus) and an exhaust note that makes you want to buy shares in Tena Lady. Oh, and it'll hit 62mph in 3.2 seconds and keep on going to 212mph. 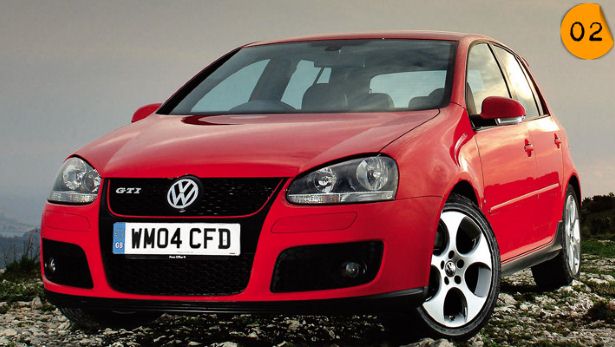 If you can't quite find the 350k euro required to get your bum in TopGear's all time iconic motor, how about spending a 10th of it on a car that, let's face it, is actually a lot better?

The Golf GTI began life as a yuppie plaything, but has evolved into arguably the most complete motoring package on the planet. Performance, practicality, comfort, refinement, and for sensible money.

In the real world, this is near enough perfection. 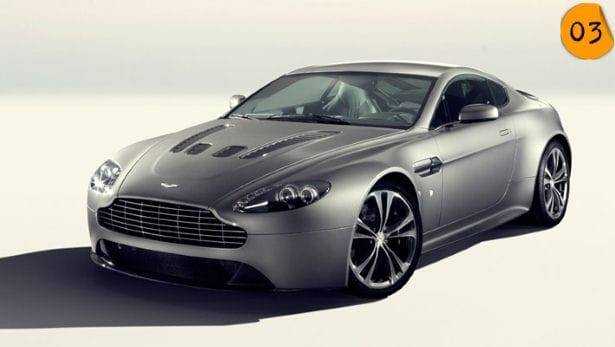 The ultimate contemporary Aston, combining the comparative understatement of the V8 Vantage with the 510bhp 6.0-litre V12 from the DBS. Not by any stretch the perfect supercar, but by a long one the best Aston in years. This is everything a handmade British sports car should be. 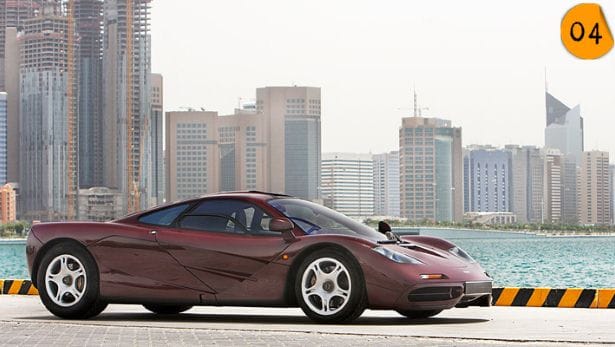 There's no getting away from the fact that when Gordon Murray set out to end the supercar space race, way back in 1988, he pretty much succeeded. The past 20 years have seen faster cars (one) and better handling ones (only arguably), but none has eclipsed the F1. 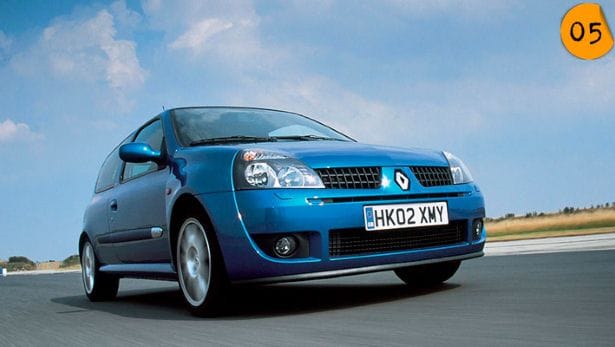 Atop the frill free French hot hatchery sits the original Clio Cup. Taking the spirit of the life affirming but occasionally life concluding Peugeot 205 GTI, and piling on the precision, poise and absence of lift off oversteer, it gifted affordable, practical performance to the people and two years of cover stories to Evo magazine. 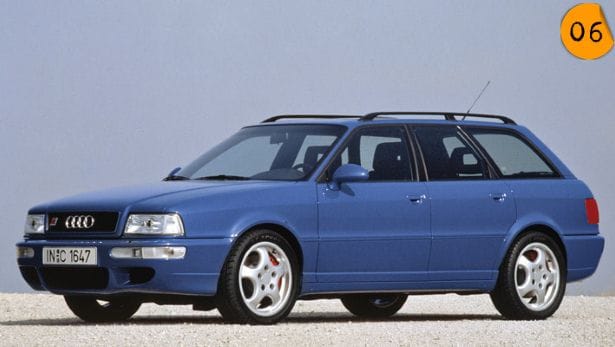 One of the first and purest incarnations of the whole Q Car phenomenon, the Audi RS2 Avant was a practical family estate with a sideline in slaying supercars. A joint project between Audi and Porsche, who rebuilt and heavily modified the car, the all-wheel-drive RS2 could get out of the blocks faster than most contemporary racing cars. Even today, its road-going performance is on a par with 120,000 Italian exotica - think 0-62mph in 4.8 seconds and a top speed of 162mph - but you can pick up a tidy RS2 for the price of a basic A3. 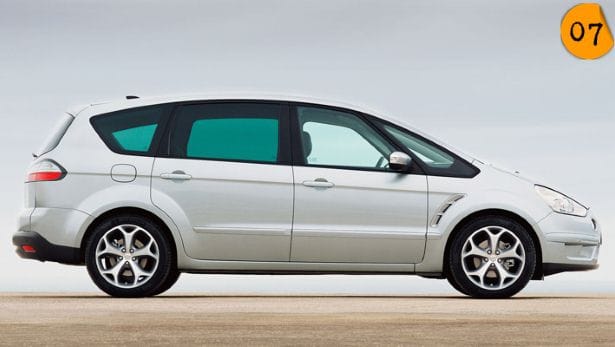 What Ford did with the S-Max was emancipate a vast, blighted section of the car community who'd been forced into interminably dull family cars by the sudden appearance of offspring. The S-Max looks great and steers, rides and handles with the sort of easy vigour once reserved for hot hatches. Dad is very definitely back. 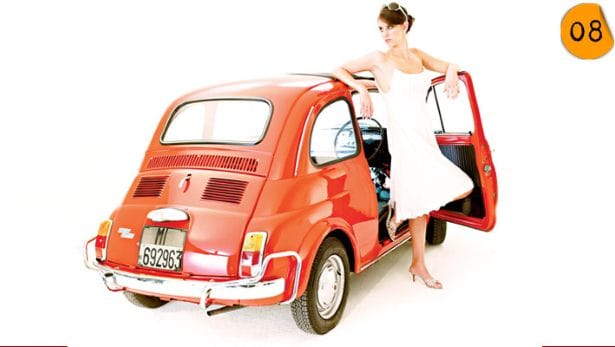 A controversial inclusion in TopGear's Top 20, the Fiat 500 actually appeared nearly 40 years before we first popped up in Smith's. But it's allowed in here because we also crowned it the Sexiest Car of All Time back in 2006. The 500 evokes a bygone era of cheap, uncomplicated motoring - full of empty sunlit backstreets, dark glasses and suntanned legs tumbling out of whisper thin miniskirts. What's more, it's a car so comprehensively devoid of dialled in masculinity that to drive one now is the ultimate expression of manliness. Try it. You'll pull faster than Errol Flynn in a knocking shop. 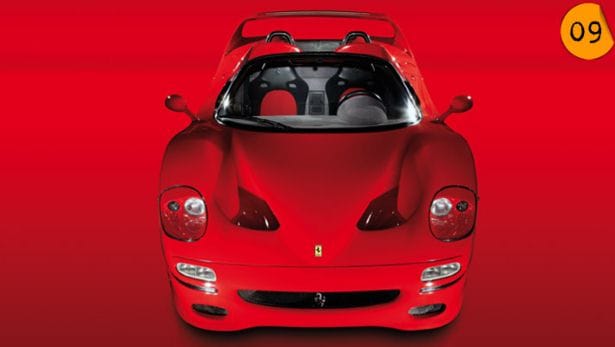 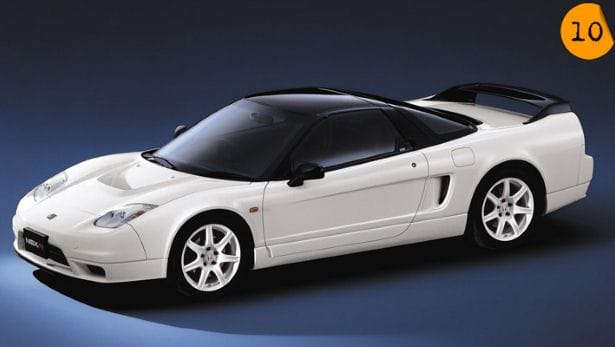 The NSX was a massive motoring milestone. It made the West sit up and pay attention to Japanese performance engineering, it made Gordon Murray reassess what made a great supercar when he was designing the McLaren F1, and then it did something truly unthinkable. Somehow it made Honda cool.

The NSX R was a lightened, stiffened run out model with a track focused steering and suspension set up that meant it was almost unbearably hard to drive on the public road . But sometimes a refusal to compromise is what tickles TopGear's fancy. It was also only available in white, which is essential for all proper Japanese supercars. 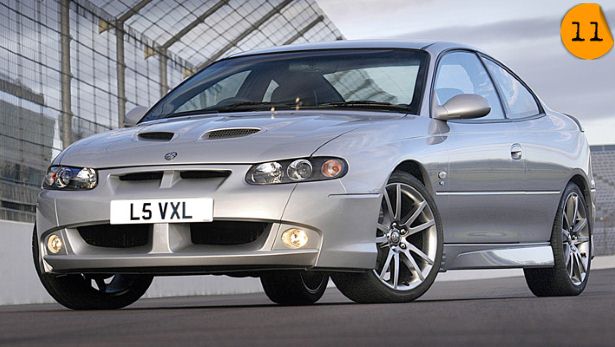 The spot that should have been occupied by the 1990 Lotus Carlton instead goes to 2005's Vauxhall Monaro. The Carlton ceased production before we even started, so it's out on a technicality, and it took that long for Luton to produce another car we cared about. And it was still essentially shit. But a 170mph, 6.0-litre V8 for £37k? We'll have a bit of that. 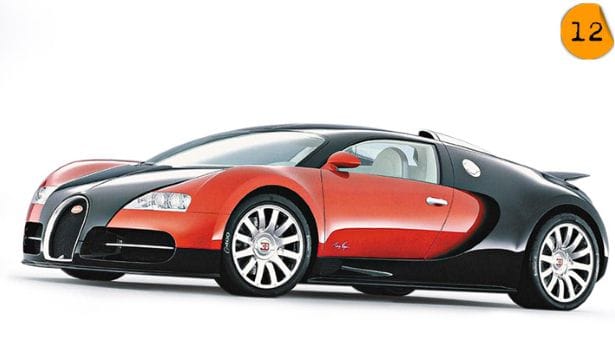 The car that got James May to 200mph. And then carried on for another 53mph. It may have taken longer to appear than Chinese Democracy, and cost 899,000 when it finally did, but Mankind needs at least one 987bhp quad turbo 8.0 litre 16 cylinder supercar. 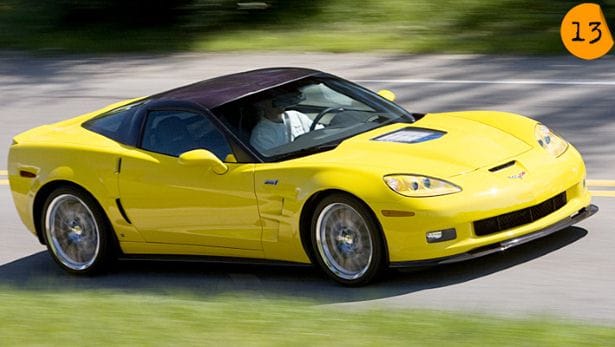 The only thing that distracts Americans from building laughable cars is the need to go racing. It happened with the Ford GT, and now it's happened with the Vette. Following repeat wins at Le Mans in the last few years, the 638bhp Corvette ZR 1 will hit 205mph and go round corners. Which is a first. 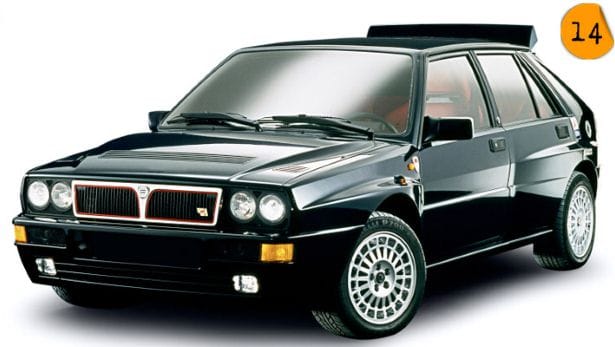 Few cars hold so unique a place in our hearts as the Lancia Delta Integrale. From the late Eighties to early Nineties, it won the World Rally Championship a record six times and the wide track, turbo charged road going version (preferably emblazoned in full Martini livery) is as jaw dropping now as it was then. 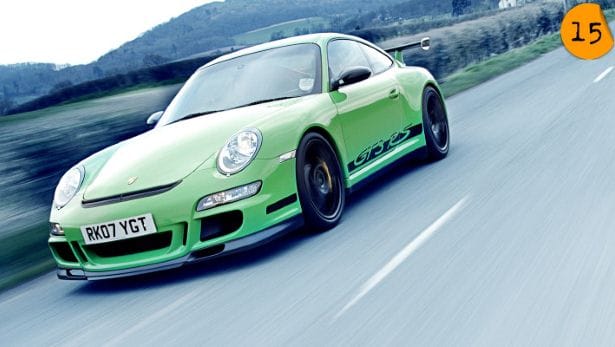 Clarkson used to give Porsche a hard time in TopGear, but when Richard Hammond arrived on the scene, Stuttgart suddenly had a passionate defender. The ultimate evolution of the current 911 is the GT3 RS.

There is no finer illustration of Porsche's genius than this, a car that will as happily pop to the shops as lap the Nordschleife in under eight minutes. It has the poise and prowess of a bona fide GT racer, but barring wanton acts of high limit lunacy it's as approachable and tractable as your average hatch. It also comes in this fetching shade of green, with big stickers on it. Which ought to be a legal requirement. 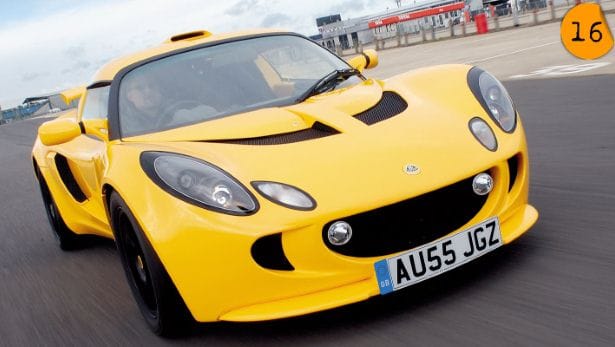 The Elise was a turning point for Lotus, and a bar raising moment for low volume British sports cars. But it is the Series 2 Exige S that makes it onto our list for the sheer drama of the thing: ominous aero package, supercharger whining behind your head, physics bashing levels of grip. Turns every commute into a mini Le Mans. 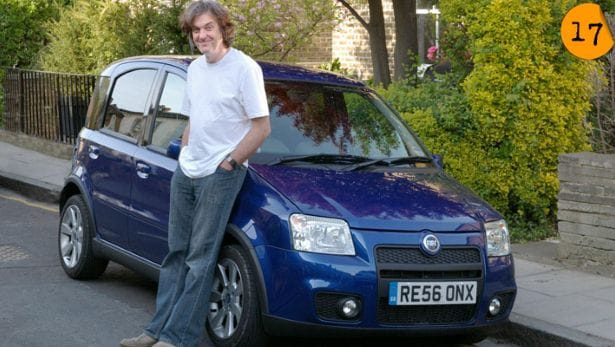 Not everything in our Top 20 is fast. In fact, some of it is Captain Slow sort of fast. James has long extolled the virtues of his own Fiat Panda, one of very few modern cars that evokes the honesty and simplicity of our motoring past. It's cheap, simple and unpretentious, but it's also compact yet capacious and a laugh to drive. Even for him. 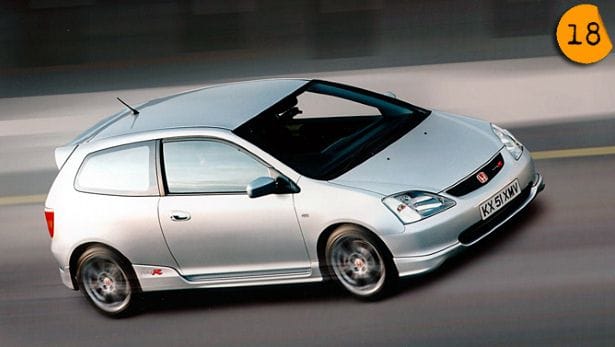 It may have ridden like a leaf spring cart, but the second-gen Honda Civic Type-R was a special bit of kit. Manically free revving VTEC engine (so good that they kept it for the current car) and a dash mounted gearlever that is guaranteed to make you go all BTCC on the way to Tesco's. Jap genius to keep the Germans on their toes. 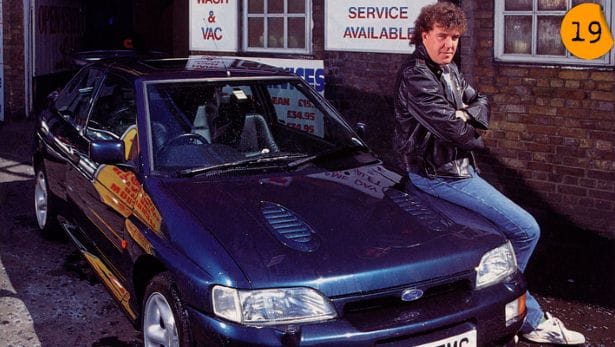 A homologation special to get Ford into the WRC, the Escort Cosworth instantly became the poster boy for a generation of blue collar petrolheads. Four-wheel drive with a heavy bias towards the rear, turbocharging and a rear wing of CanAm proportions meant it was the definitive answer to every mouth breathing hooligan's prayers. (This would be an inappropriate moment to mention that a certain Jeremy owned one.)

Unfortunately only just over 7,000 Cossies were ever made, and they weren't cheap, so it was quite tempting to nick one and/or vandalise it. (JC did get his through legitimate channels.) 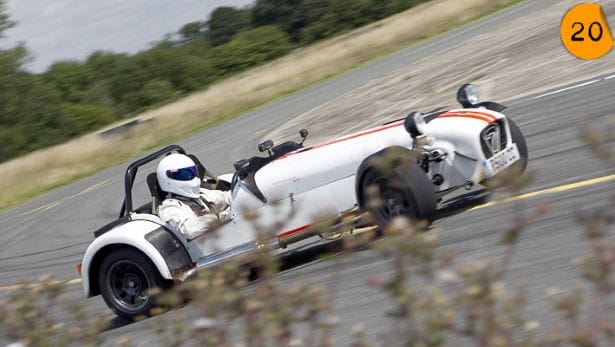 Any car as entirely absent of practical purpose as this deserves a spot in our hallowed rundown. Caterham has been putting the flies in our teeth for decades, but now, with a 260bhp 2.0-litre engine and six-speed sequential gearbox, it's putting them there at warp speed. No wonder Hammond keeps getting 'em whitened. 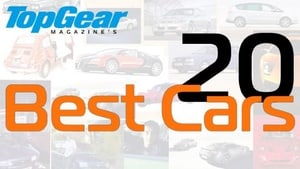 According to Top Gear the best 20 cars
i agree on almost all only not to Clio and 500,
the Vauxall (our Opel in Europe) Monaro seems good, but we will never see it here in Italy unfortunately.

Cars i love from U.S.A by Marek

Cars from Europe by Marek

Cat and dogs vintage by Marek