Irukandji syndrome is a condition induced by venomization by the sting of Carukia barnesi, a species of Irukandji jellyfish, and certain other box jellyfish. Unless immediate medical action is taken, victims can go into cardiac arrest and die. The syndrome was given its name in 1952 by Hugo Flecker, after the Aboriginal Irukandji people who live in Palm Cove, north of Cairns, Queensland, Australia, where stings are common.

Irukandji syndrome includes an array of systemic symptoms, including severe headache, backache, muscle pains, chest and abdominal pain, nausea and vomiting, sweating, anxiety, hypertension, tachycardia and pulmonary edema. One unusual symptom associated with the syndrome is a feeling of "impending doom". Patients have been reported as being so certain they are going to die, they beg their doctors to kill them to get it over with. Symptoms generally abate in four to 30 hours, but may take up to two weeks to resolve completely.

The severity of the pain from an Irukandji jellyfish sting is apparent in the 2005 Discovery Channel documentary Killer Jellyfish about Carukia barnesi, when two Australian researchers (Jamie Seymour and Teresa Carrette) are stung. Even under the "maximum dose of morphine", Teresa remarked she "wished she could rip her skin off", and is later seen writhing uncontrollably from the pain while lying on her hospital bed. Jamie said he wished that he was stung by Chironex fleckeri, instead, since "the pain goes away in 20 minutes or you die".

On the television program Super Animal, a woman compared her pain from childbirth to her experience with Irukandji syndrome: "It's like when you're in labor, having a baby, and you've reached the peak of a contraction -- that absolute peak -- and you feel like you just can't do it anymore. That's the minimum that [Irukandji] pain is at, and it just builds from there." 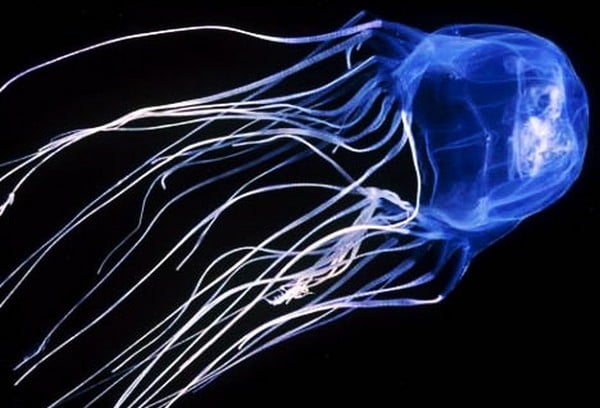 It's incredible how such a tiny little thing (with a bell of 5 mm) can inflict so much pain and destruction. If you don't want to get along with other species that's fine, but why so mean?

According to Dr. Peter Goadsby: "Cluster headache is probably the worst pain that humans experience. I know that’s quite a strong remark to make, but if you ask a cluster headache patient if they’ve had a worse experience, they’ll universally say they haven't. Women with cluster headache will tell you that an attack is worse than giving birth. So you can imagine that these people give birth without anesthetic once or twice a day, for six, eight, or ten weeks at a time, and then have a break. It's just awful." 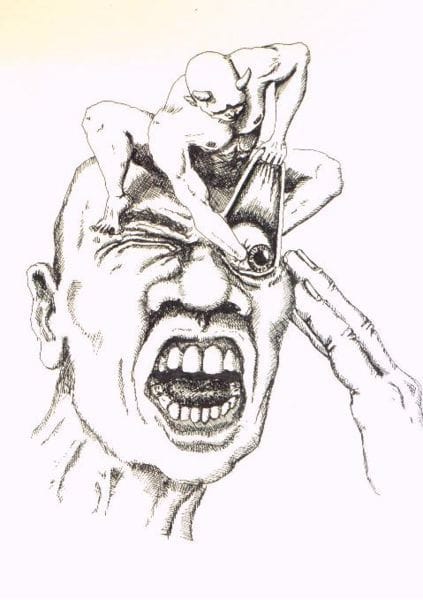 I've watched a clip of a guy who supposedly was experiencing an episode of a cluster headache and boy did it look painful. As the illustration demonstrated, it's like being perforated in the eye with a "white hot poker." Some who were unfortunate to have been cursed by them even went as far as taking their own lives. This is why it's often colloquially been referred to as "suicidal headaches." Things are not all doom and gloom though as it's been reported that certain drugs like psilocybin and LSD have been effective in stopping these headaches.

Trigeminal neuralgia (TN or TGN) is a chronic pain disorder that affects the trigeminal nerve. There are two main types: typical and atypical trigeminal neuralgia. The typical form results in episodes of severe, sudden, shock like pain in one side of the face that lasts for seconds to a few minutes. Groups of these episodes can occur over a few hours. The atypical form results in a constant burning pain that is less severe. Episodes may be triggered by any touch to the face. Both forms may occur in the same person.[1] It is one of the most painful conditions and can result in depression.

It is estimated that 1 in 8,000 people develop trigeminal neuralgia a year. It usually begins in people over 50 years old, but can occur at any age. Women are more commonly affected than men. 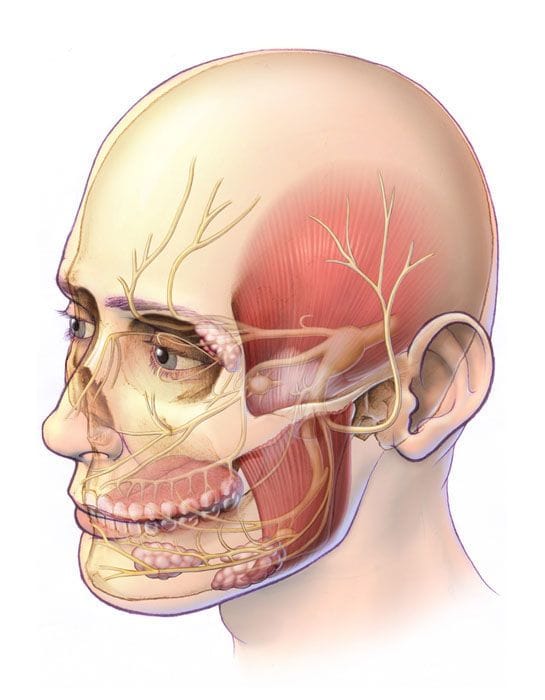 This one is a bitch too. Surgeries like Microvascular decompression seems to be the best bet for relief. Even then, the pain could transfer to the other side of the face for some poor unlucky soul.

Sickle-cell disease (SCD) is a group of blood disorders typically inherited from a person's parents.[1] The most common type is known as sickle-cell anaemia (SCA). It results in an abnormality in the oxygen-carrying protein haemoglobin (hemoglobin S) found in red blood cells. This leads to a rigid, sickle-like shape under certain circumstances. Problems in sickle cell disease typically begin around 5 to 6 months of age. A number of health problems may develop, such as attacks of pain ("sickle-cell crisis"), anemia, swelling in the hands and feet, bacterial infections, and stroke.[2] Long term pain may develop as people get older.

Dr. Jeffrey Glassberg who takes care of adults living with sickle cell disease describes its symptoms: “Many people experience pain as their main symptom — sometimes it’s pain that comes and goes and comes and goes, while other times it follows a trigger, like stress, hot or cold, or dehydration. People often rate the pain of sickle cell disease as worse than labor, or worse than having your bones broken — in severe cases, it can be excruciating.” 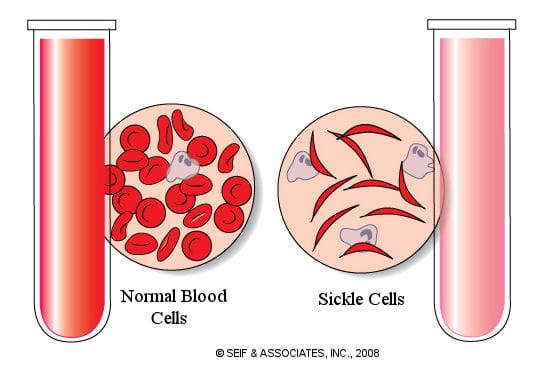 The pain caused by this insect's sting is reported to be greater than that of any other hymenopteran, and is ranked as the most painful according to the Schmidt sting pain index, given a "4+" rating, above the tarantula hawk wasp, and according to some victims, equal to being shot, hence the name of the insect. It is described as causing "waves of burning, throbbing, all-consuming pain that continues unabated for up to 24 hours". Entomologist Justin Schmidt himself described the sting as a "pure, intense, brilliant pain - like walking over flaming charcoal with a 3-inch nail in your heel".

Poneratoxin, a paralyzing neurotoxic peptide isolated from the venom, affects voltage-dependent sodium ion channels and blocks the synaptic transmission in the central nervous system. It is being investigated for possible medical applications.

The Sateré-Mawé people of Brazil use intentional bullet ant stings as part of their initiation rites to become warriors. The ants are first rendered unconscious by submerging them in a natural sedative, and then hundreds of them are woven into gloves made of leaves (which resembles a large oven mitt), stingers facing inward. When the ants regain consciousness, a boy slips the gloves onto his hands. The goal of this initiation rite is to keep the glove on for a full 10 minutes. When finished, the boy's hand and part of his arm are temporarily paralyzed because of the ant venom, and he may shake uncontrollably for days. The only "protection" provided is a coating of charcoal on the hands, supposedly to confuse the ants and inhibit their stinging. To fully complete the initiation, however, the boys must go through the ordeal a total of 20 times over the course of several months or even years. 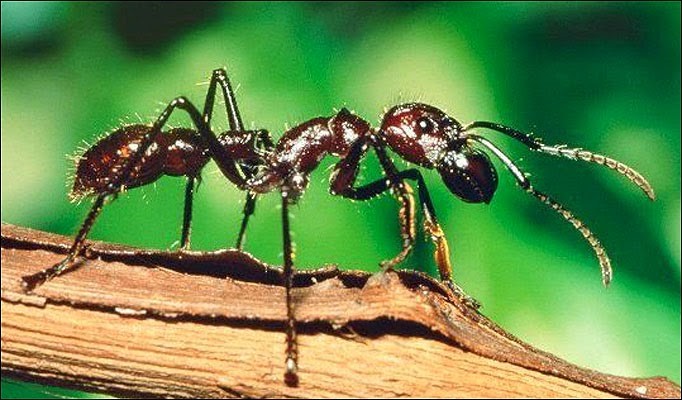 I have a pretty high pain threshold and braved through many storms that came my way. The idea of a ritual using bullet ant stings to toughen and mould men and boy's mental resilience is really enticing to me though. I'm sure I have more trials to pass in my life and if this can help me understand that there is nothing worse than being stung by bullet ants then I could subjugate any other pain.

Stonefish stings are both potentially lethal and extremely painful. In Australia they can cause envenomation and death if not treated. They are considered to be one of the most venomous fish in the world and when stepped on by a human, forces venom into the foot. Most stonefish stings occur as a result of stepping on the creature while it is less common for the fish to sting when it is picked up. Stonefish stings can occur on the beach, not just in the water, since stonefish can survive out of the water for up to 24 hours. They often cannot be easily seen as they look similar to rocks or coral. Stonefish antivenom is the second-most administered in Australia.

The pain from the sting is described as instant and intense. One victim described the experience on an online aquarium enthusiasts' forum:

"I got spiked on the finger by a stonefish in Australia … never mind a bee sting. … Imagine having each knuckle, then the wrist, elbow and shoulder being hit in turn with a sledgehammer over the course of about an hour. Then about an hour later imagine taking a real kicking to both kidneys for about 45 minutes so that you couldn't stand or straighten up. I was late 20s, pretty fit physically and this was the tiniest of nicks. Got sensation back in my finger after a few days but had recurrent kidney pains periodically for several years afterwards."

Other stories describe sting victims wanting to have their stung limb amputated from their body.

Hoech of the Monterey Bay Aquarium has worked closely with the stonefish, and he agreed that the animal "is definitely at the top of the list" of the most pain-producing creatures. 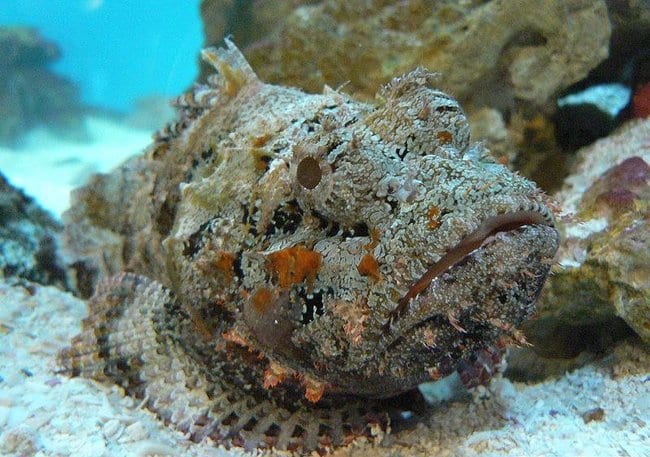 The stonefish sting reminds me of that joke Billy Connolly did in honour of it titled: "The Worst Pain Known to Man." I'm sure I've recorded it somewhere, one day I'm gonna have to fish it out.

Speaking to female colleagues, some believed that the pain of their broken toe or leg at least matched the agony of birth, but the one that came up online most were broken ribs – due to the fact that the act of breathing brought on waves of nauseating pain. Rib fractures are very painful, because every time you breathe, the broken ribs move up and down. People then take small breaths to limit the pain. 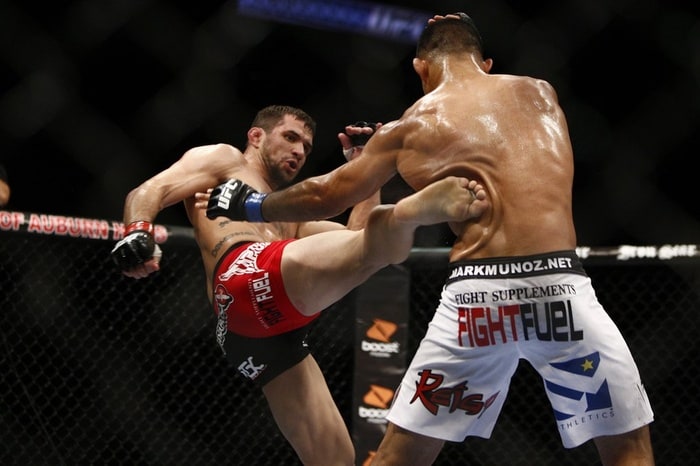 The hallmark of a stone that obstructs the ureter or renal pelvis is excruciating, intermittent pain that radiates from the flank to the groin or to the inner thigh.[10] This pain, known as renal colic, is often described as one of the strongest pain sensations known.[11] Renal colic caused by kidney stones is commonly accompanied by urinary urgency, restlessness, hematuria, sweating, nausea, and vomiting. It typically comes in waves lasting 20 to 60 minutes caused by peristaltic contractions of the ureter as it attempts to expel the stone. 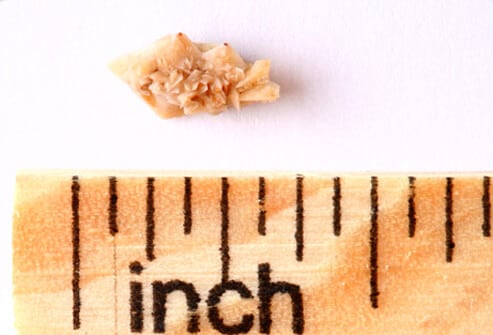 I don't think I've ever heard any female members of my family complain about the pain of childbirth. That's kind of expected given how tough a unit us lot are. But the mere mention of kidney stones can bring about awkward silences as if it were a forbidden word. I mean, just the thought of it alone is scary enough and leave you waking up in a cold sweat. It makes me tear up knowing I had one family member endure this most grotesque of ordeals.
What is the most painful thing you've experienced in your lifetime? I think most women will say childbirth and love to force it down your throat and use it as a crutch to say that men have it good so therefore women deserve entitlements. I was thinking of adding toothaches but my mother experienced toothache and while it does look painful I can't imagine it being as intense as childbirth. The pain in childbirth is plain to see in women. But what do I know about pain, I'm a privileged guy. I spent my whole life averting physical pain and illness as best as I can. In fact, that may be the reason why I'm aware of these conditions in the first place. I'd rather sit an A-Level physics exam than go through the hell that these illnesses bring.

Book of Job by William Blake by Overman

About basketball by Mass. Patriot

A Face for Every Emotion by shotswerefired