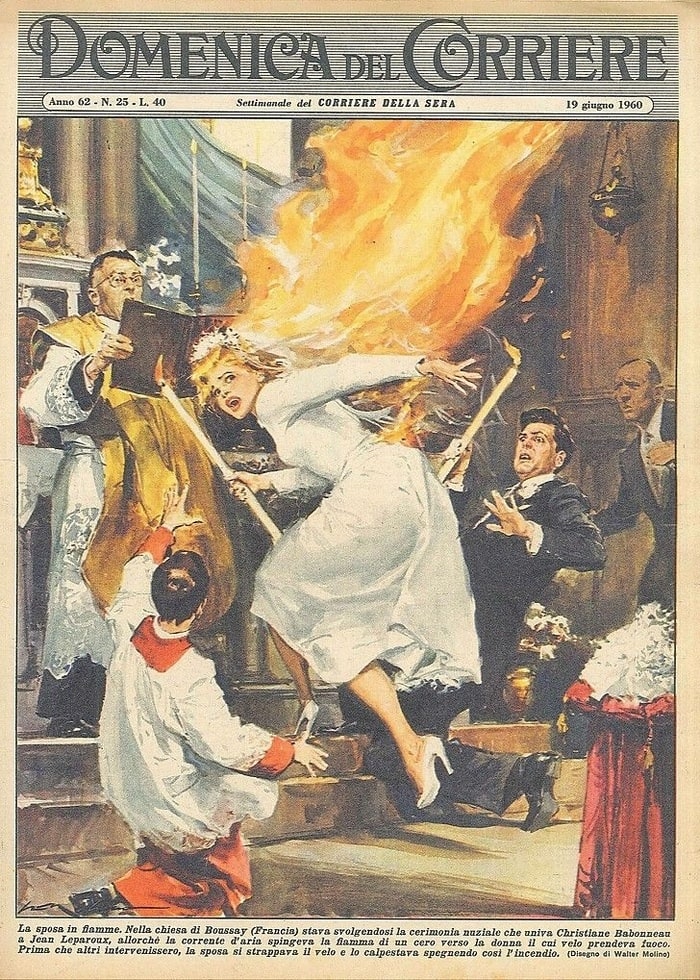 19th June 1960 - In Boussay (Indre-et-Loire, France), in the course of the nuptials, the veil of the bride catches fire due to a church candle.
Cover by Walter Molino. 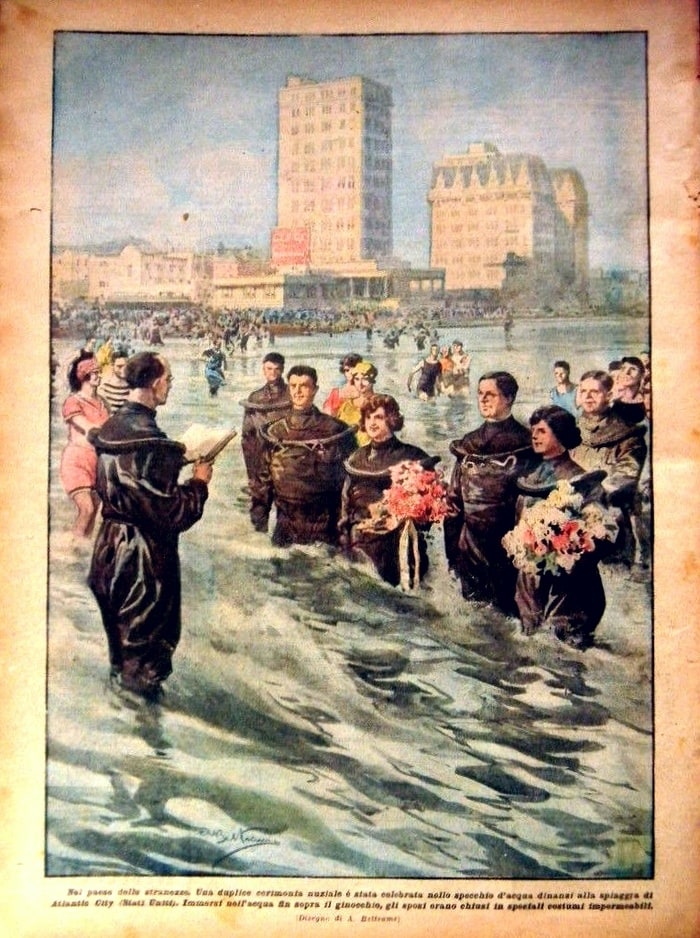 18th June 1922 - In Atlantic City, a double wedding in the foreshore, wearing deep-sea diver gears.
Back cover by Achille Beltrame. 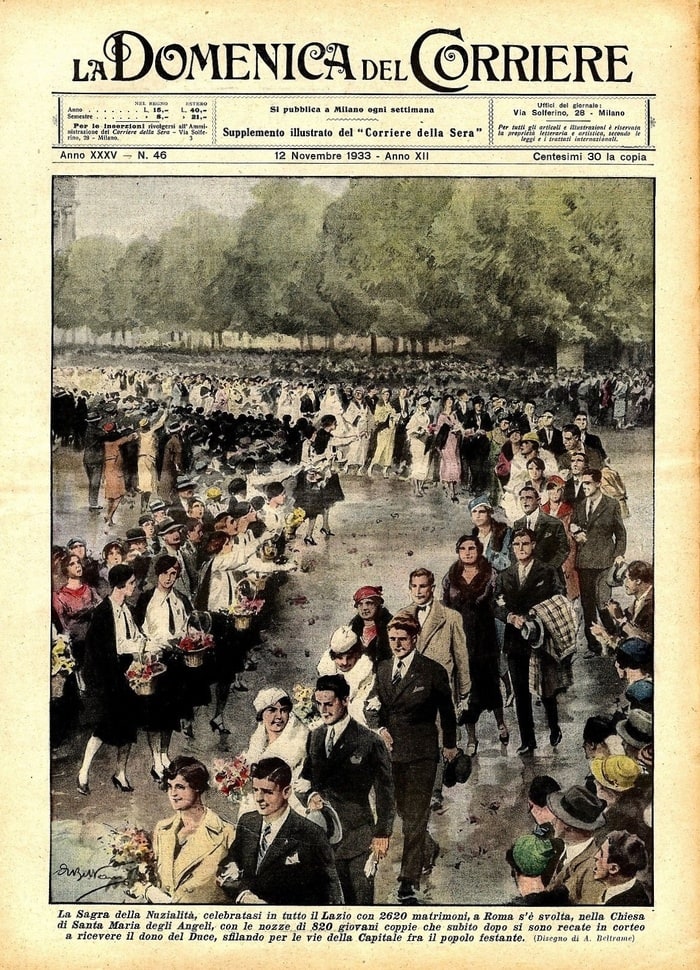 12th November 1933 - In Rome, Sagra della Nuzialità (Wedding Feast) for 820 couples in the Basilica of Santa Maria degli Angeli e dei Martiri (St. Mary of the Angels and the Martyrs). After the ceremony, the couples were received by Italian Prime Minister Benito Mussolini.
Cover by Achille Beltrame. 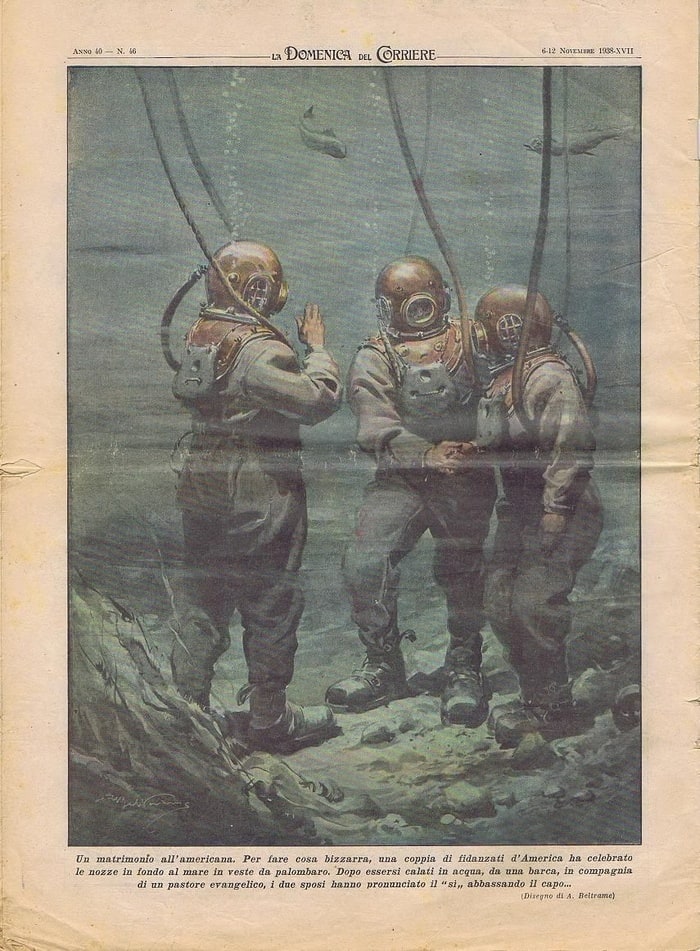 6th November 1938 - U.S. wedding under the sea: a couple is married by an evangelical pastor and they are all in deep-sea diver gears.
Back cover by Achille Beltrame. 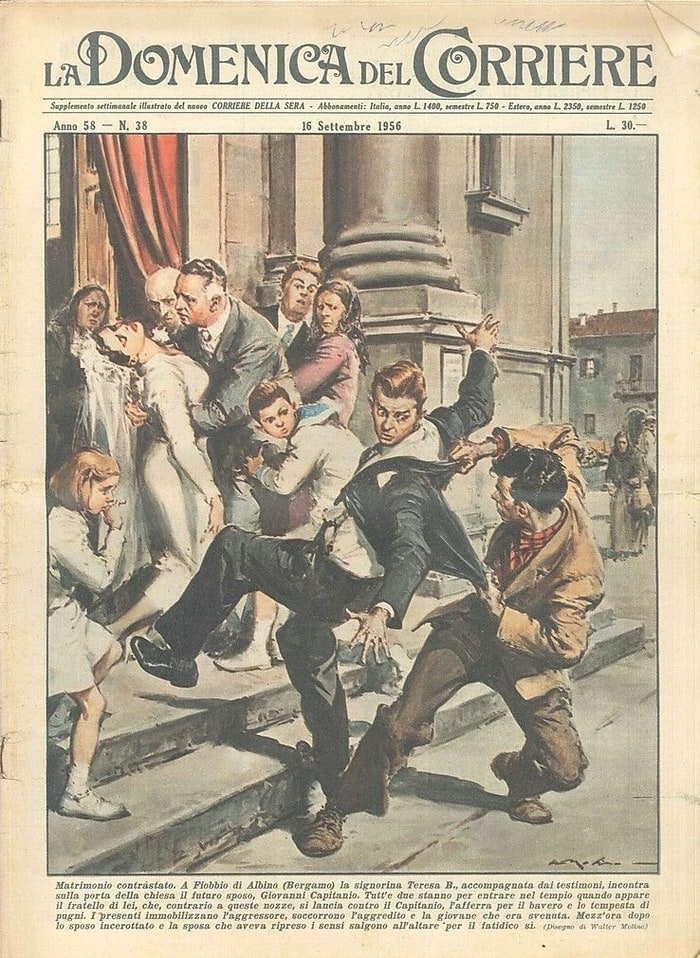 16th September 1956 - In Fiobbio di Albino, near Bergamo (Lombardy, Northern Italy), the bride's brother assaults the bridegroom just before the nuptials. He was against their marriage.
Cover by Walter Molino. 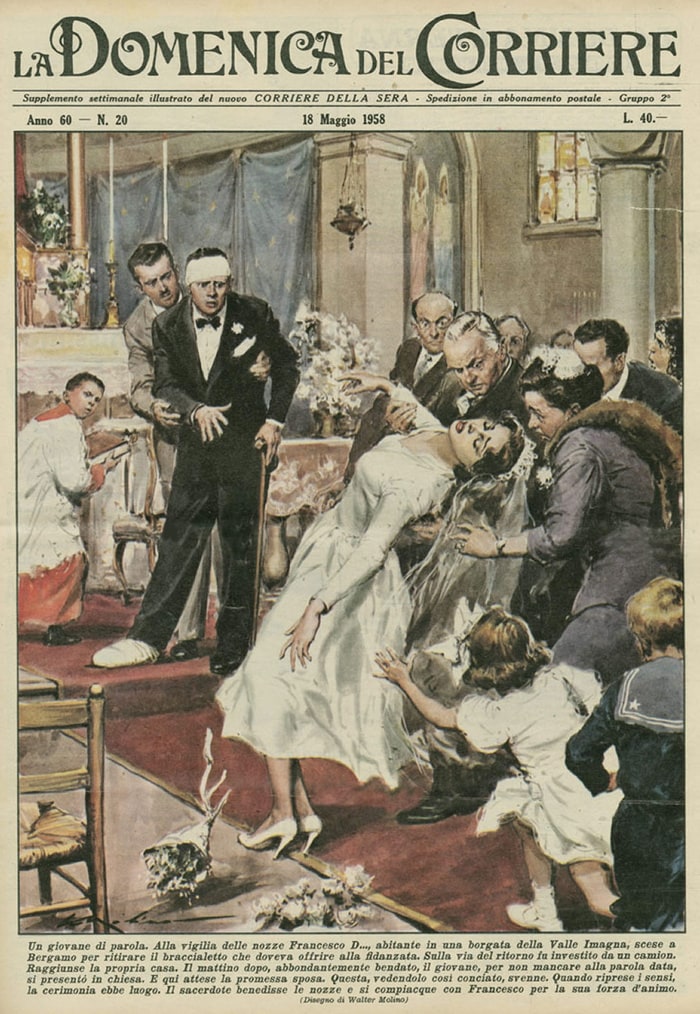 18th May 1958 - In Valle Imagna, near Bergamo (Lombardy, Northern Italy), a man is run over by a truck while going to pick up the bracelet for his bride the day before the nuptials. On the wedding day, the bride faints after seeing him bandaged. After she came to, they got married.
Cover by Walter Molino. 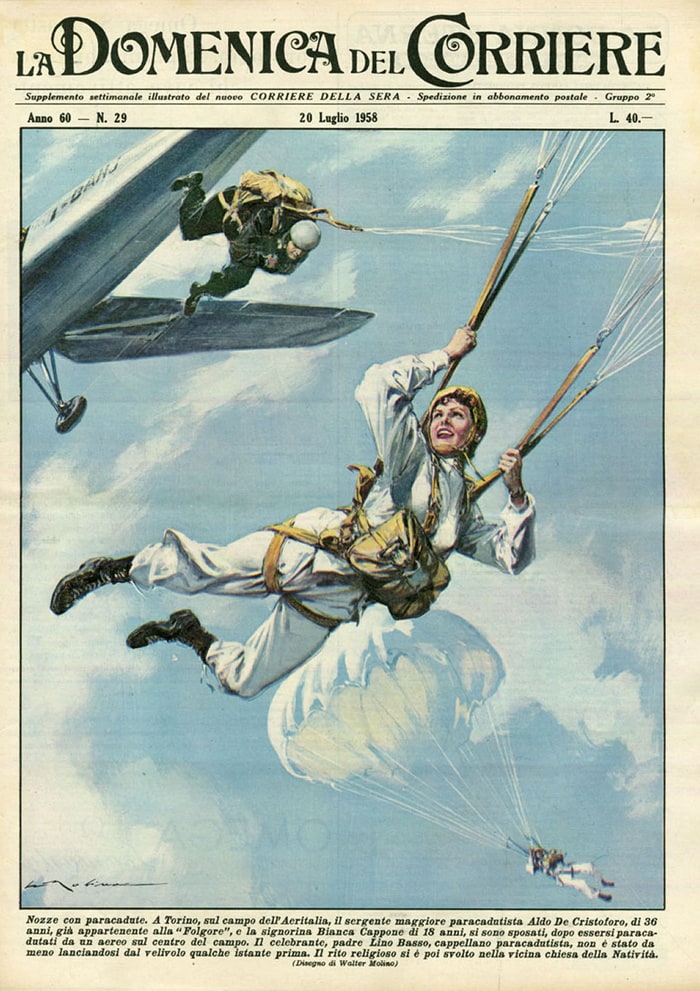 20th July 1958 - Parachute wedding: in Turin's Aeritalia flying field (Piedmont; Northern Italy) the bride, the bridegroom (an Italian Army sergeant) and a military chaplain parachute and go to the nearby church.
Cover by Walter Molino. 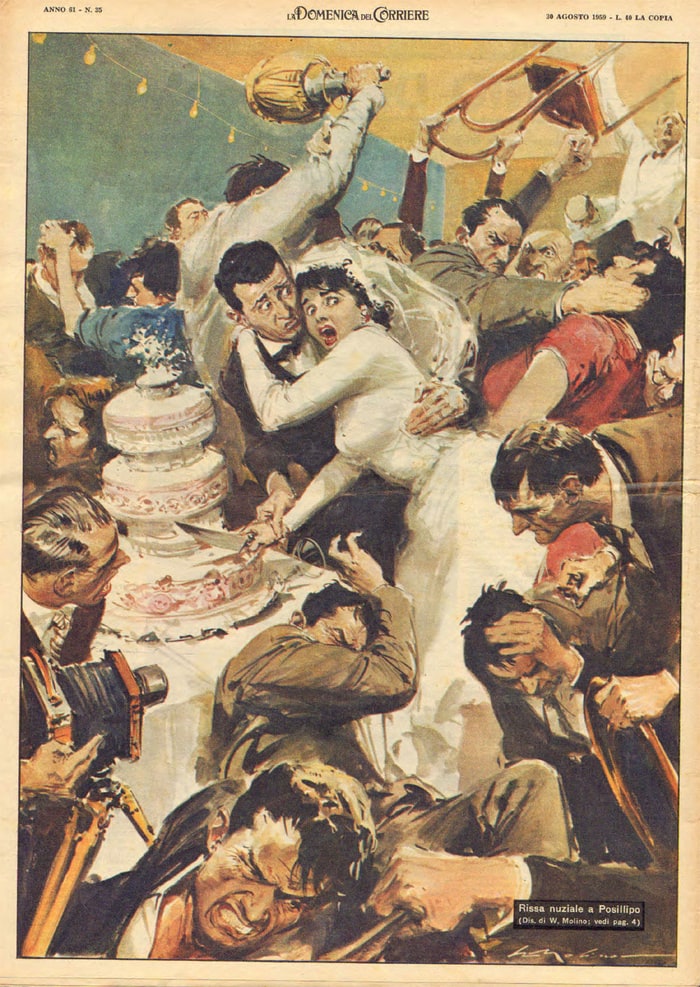 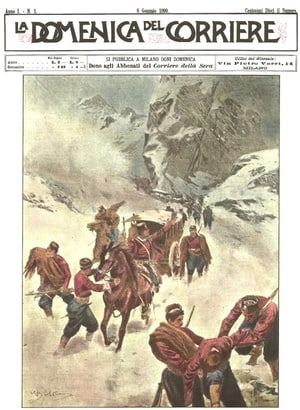 La Domenica del Corriere (The Sunday of Corriere) was a weekly newsmagazine whose first issue was published on 8th January 1899. Its name was after the eminent Milan newspaper Corriere della Sera (The courier of the evening). La Domenica del Corriere was the most popular Italian newsmagazine from its beginning to the 1960s.
Above: cover of the first issue, by Achille Beltrame, about a dramatic snow storm in Montenegro. 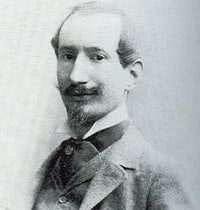 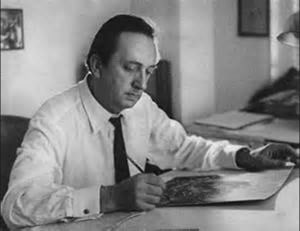 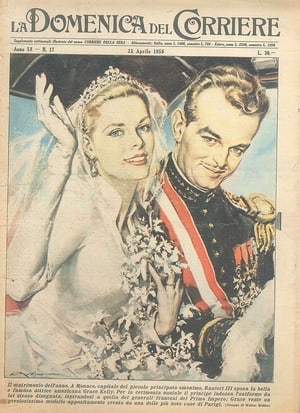 Cars and Stars by Iceviper

80's Top of the Rock Videos RESTORED by Mass. Patriot

Cat Vs Dog by Iceviper