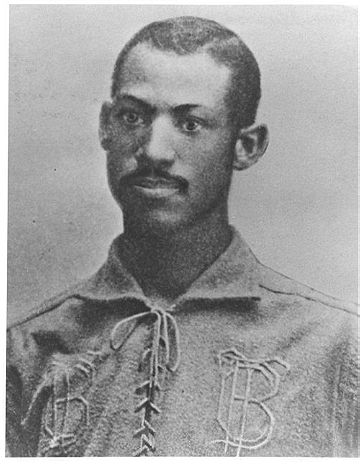 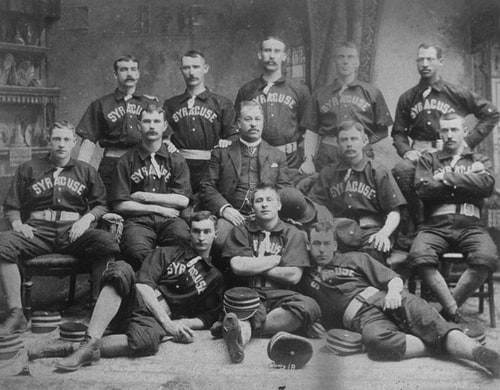 Jackie Robinson broke MLB’s color barrier in 1947, but Moses "Fleetwood" Walker, who played for the Toledo Blue Stockings of the American Association, was the first African-American professional baseball player. In fact, Walker and his brother, Weldy, were the impetus for the color line to be drawn in 1884, which Robinson then broke in '47. 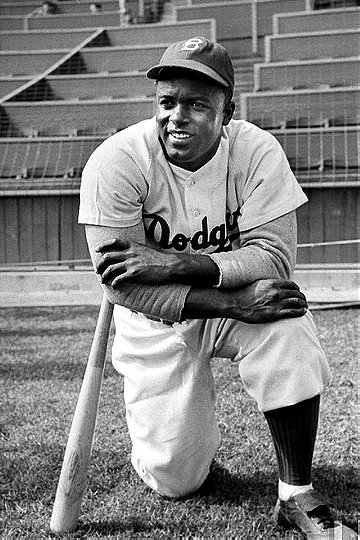 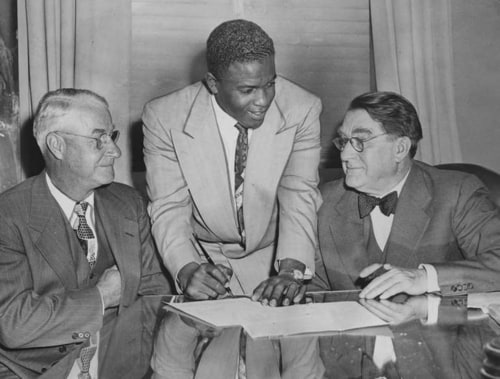 The most egregious case of collusion in the history of sports was Major League Baseball’s "gentlemen’s agreement" among owners to exclude players of African descent from the game. Although some lighter-skinned Hispanic and Pacific Islander players could pass into the game during the early 1900s, the hard-line drawn against African-Americans stood firm and was staunchly upheld by commissioner Kenesaw Mountain Landis throughout his 23-year reign over the game. In the second year of his successor, Happy Chandler’s, tenure though, the Brooklyn Dodgers signed Negro Leaguer and former UCLA star Jackie Robinson to a contract. The following spring, on April 15, Robinson made an indelible mark in history when he suited up in an MLB game and changed the course of everything that would follow. 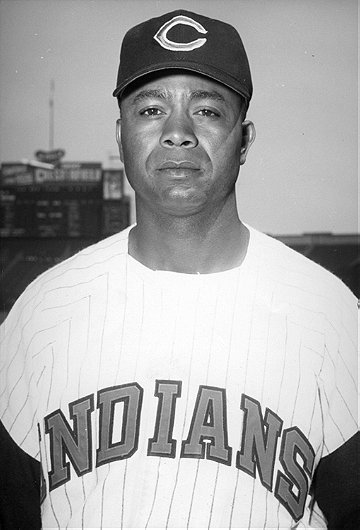 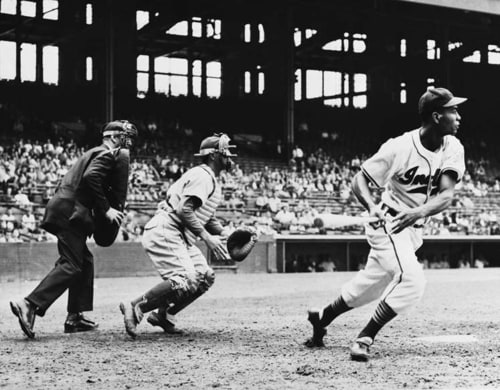 Robinson was not on his own for long. The Cleveland Indians followed suit by becoming the first AL team to integrate its ranks when they signed outfielder Larry Doby. The Indians were owned by Bill Veeck, who pushed for integration as early as 1942 but was blocked by Landis. On July 3, Veeck purchased Doby’s rights from the Newark Eagles of the Negro National League, and two days later he made his MLB debut. Doby would go on to become the first African-American player to lead a league in home runs when he connected for 32 in 1952, in addition to becoming a seven-time All-Star. 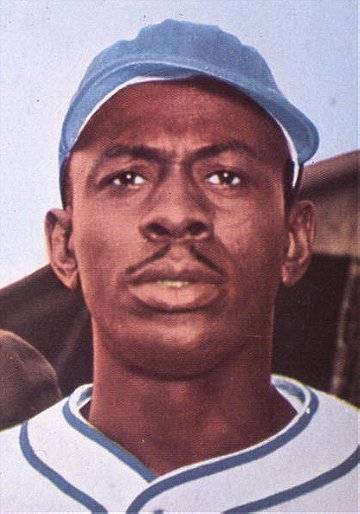 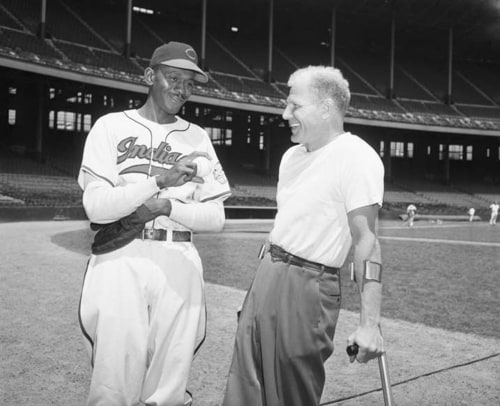 1948: Satchel finally makes his way to the majors

Leroy “Satchel” Paige was the greatest pitcher the Negro Leagues ever saw and is regarded as perhaps the greatest pitcher of all time, regardless of league. The stories of his feats on the mound are legendary, but due to the color barrier, Paige’s best form never graced an MLB mound. However, the ageless wonder did finally get the chance to suit up in the majors in 1948 when he had his "rookie" year for the Cleveland Indians — at 41 years old. Over six seasons spent mostly as a reliever, he converted 33 saves and held a 3.29 ERA before playing his final game at age 58 in 1965. 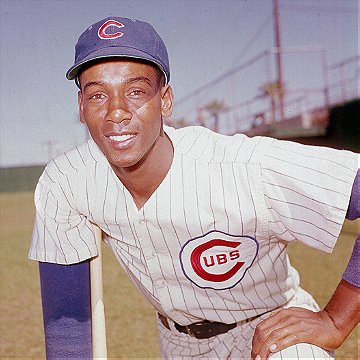 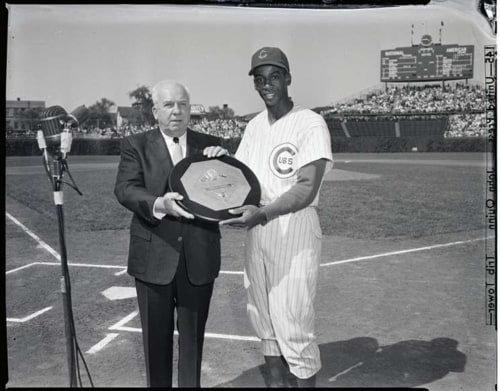 While his sunny disposition amid some perennially tough times has become legendary, Ernie Banks was better known in his time for his potent bat. After winning the 1958 NL MVP, Banks followed up with an encore MVP season a year later. In the process, he became the first black player to win consecutive MVP honors. Over the course of the two-year run, the legendary shortstop totaled a .308 average, .605 slugging percentage, 92 home runs, and 272 RBI. 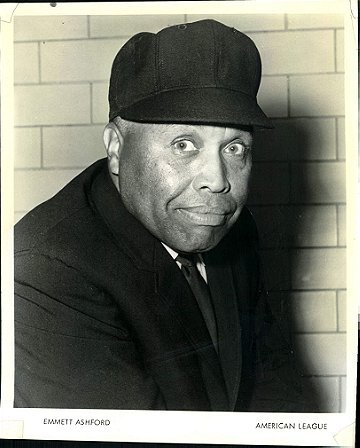 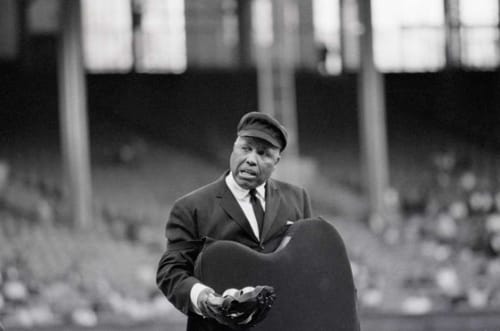 After a career that spanned several professional leagues along the way, including the Southwestern League when in 1951 he became the first African-American to umpire a predominantly white league, Emmett Ashford got the call to the big show. On April 12, 1966, Ashford became the first black MLB umpire and quickly became one of the most respected — and eccentric — umps of all time. 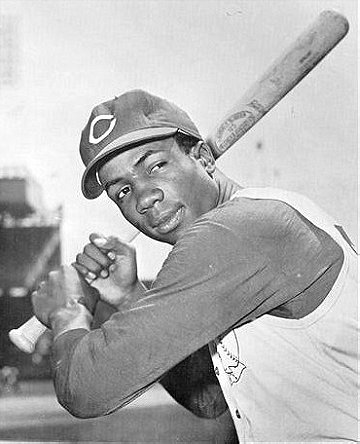 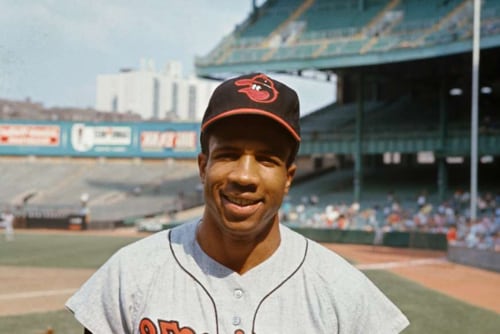 Freshly jettisoned from Cincinnati, where he hit 324 home runs and was named 1961 MVP for the Reds, Frank Robinson put on a show in his first year with the Baltimore Orioles. His .316 batting average, 49 home runs, and 122 RBIs made him the first African-American hitter to complete the Triple Crown. His effort also helped push the Orioles to a World Series sweep over the Los Angeles Dodgers. 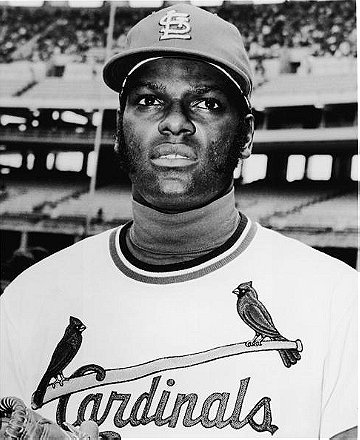 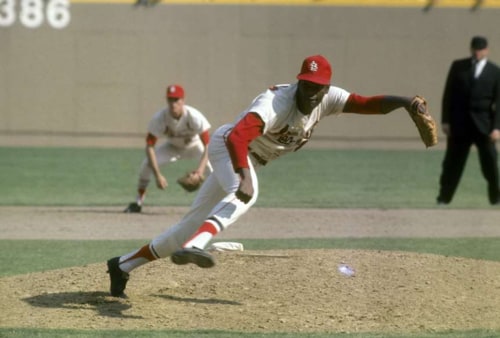 There are few seasons that compare to the one Bob Gibson had in 1968 for the St. Louis Cardinals. The intimidating hurler posted a 1.12 ERA en route to winning the National League MVP and Cy Young. It was the lowest ERA for a starting pitcher since Dutch Leonard’s 0.96 54 years earlier and remains by far the best mark of the "live ball" era, which began in 1920. Gibson also set a World Series record with 17 strikeouts in Game 1 against the Detroit Tigers the same year. 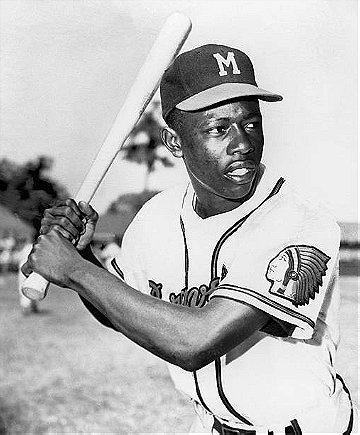 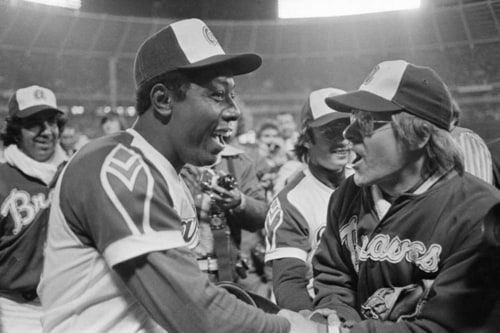 1973: Hank hammers his way to the home run crown

The career home run record of Babe Ruth had long stood as one of the most immortal and revered marks in all of sports. Then, on April 8, 1974, Hank Aaron passed the legendary Yankee as the most prolific home run hitter in the game’s history with the 715th of his career. It capped a season of incredible stress for Aaron, who received a stream of racist death threats as he stood on the precipice of passing Ruth. Aaron went on to push the record to 755 before his retirement in 1976. 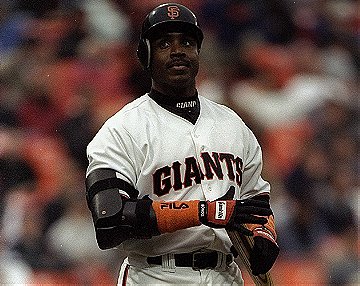 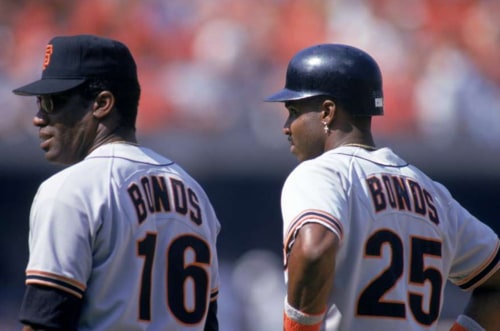 Since Barry Bonds made his debut in 1986, no father and son duo has accomplished more than the Bonds, who combined for a whopping career 220.1 win shares in their respective careers. While seven-time MVP Barry did much of the heavy lifting, Bobby was no slouch himself, hitting 332 homers and stealing 461 bases. Combined, the Bonds hit 1,094 homers and made 17 All-Star teams. 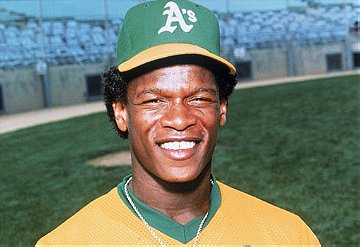 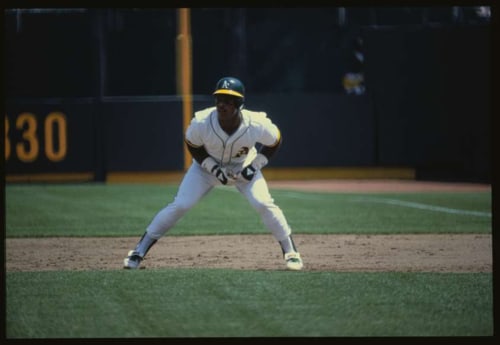 1991: Rickey runs into the record book

Never short for words or time spent on the base paths, Rickey Henderson ran his way into immortality in 1991. With a swipe of third base, he broke Lou Brock’s MLB record for stolen bases in a career with his 939th. When it was all said and done, he finished his career with 1,406 steals — over 50 percent more than Brock’s previous record. 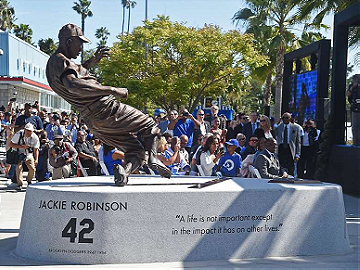 On April 15, 2004, 57 years to the day Jackie Robinson made his debut with the Brooklyn Dodgers, Major League Baseball officially observed the date in his honor. It has continued to mark not only the accomplishments of Robinson but also the legacy that followed in his wake. Although his No. 42 was officially retired by the game in 1997 to mark the 50th anniversary of his debut, Robinson’s number is reactivated every April 15 and worn across the backs of every player in the game. 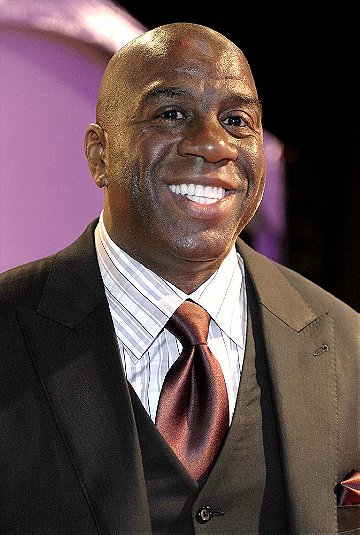 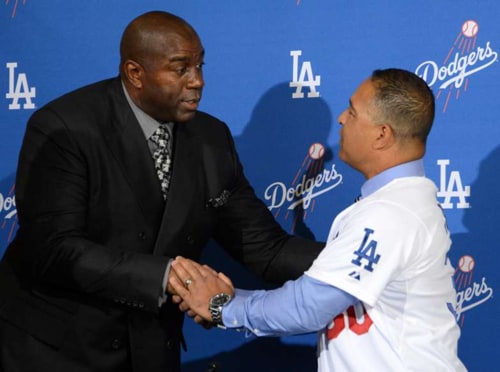 When the Los Angeles Dodgers went up for sale, a notable L.A. legend joined the Guggenheim group and Stan Kasten in vying to acquire the club: Magic Johnson. In March 2012, history surrounded the Dodgers yet again when the group’s record $2 billion winning bid made Johnson the first black owner in MLB history. 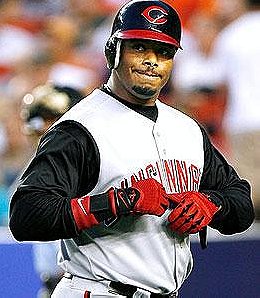 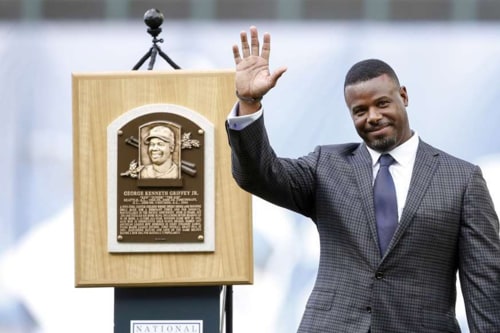 2016: Griffey resets the standard for Cooperstown

Few players in history have been as beloved as Ken Griffey Jr. was throughout his career. He became a crossover star in the 1990s, hitting 630 home runs by the time he hung up his cleats in 2010. When his day came to be elected to Cooperstown, Junior was selected via historic acclaim. Griffey appeared on 99.3 percent of ballots, which was the highest percentage in Hall of Fame history until this year when Mariano Rivera received 100 percent of the votes. 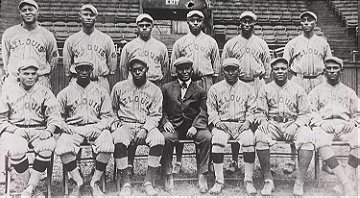 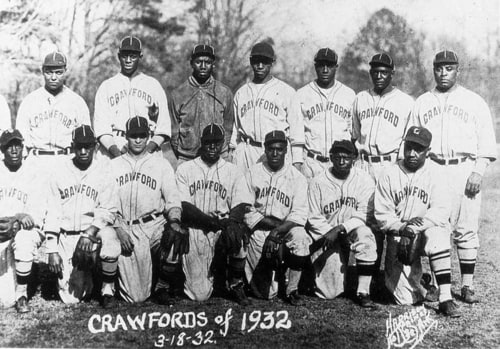 In an effort to rectify the injustices of segregation, in 2020 the MLB made the proclamation that the Negro Leagues between 1920 to 1948 would be designated as “major league status”. Because of this, the Negro League statistics and records would be given parallel designation in the MLB history books and change how history is noted in the time range. The move will bring some of the greatest players of all-time that –missed the opportunity to compete in the MLB— such as Josh Gibson, Oscar Charleston, and Buck Leonard, into the MLB record books in significant fashion. It will also increase the total career numbers of legends such as Satchel Paige, Willie Mays, and Hank Aaron, who competed in both leagues.

smoke 'em if you got 'em: cartoons by coffee-boy

Travel...Chicago my kind of town by williamm83