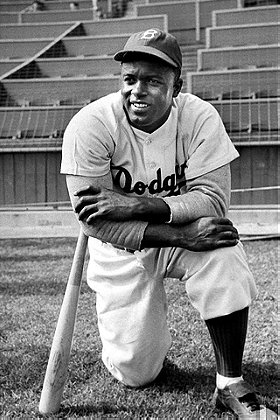 View all Jackie Robinson pictures
Jackie Robinson was an American professional baseball player who became the first African American to play in Major League Baseball (MLB) in the modern era. Robinson broke the baseball color line when he started at first base for the Brooklyn Dodgers on April 15, 1947. When the Dodgers signed Robinson, they heralded the end of racial segregation in professional baseball that had relegated black players to the Negro leagues since the 1880s. Robinson was inducted into the Baseball Hall of Fame in 1962.
Tags: US Army (1), Sports Figures In The Military (1), Minorities In The Military (1), Black People In The Military (1), World Hero (1), World War II Veteran (1), American Hero (1), Baseball Player (1), Athlete (1), Military (1), Military Officer (1), Army Officer (1), Veteran (1), U (1), Black (1), Soldier (1), Army (1), Hero (1)
My tags:

1. I Never Had It Made: An Autobiography

1. I Never Had It Made: An Autobiography

omnivorousrex added this to a list 1 year, 2 months ago

"        1947: Jackie Robinson breaks the color barrierThe most egregious case of collusion in the history of sports was Major League Baseball’s "gentlemen’s agreement" among owners to exclude players of African descent from the game. Although some lighter-skinned Hispanic and Pacific Islander players could pass into the game during the early 1900s, the hard-line drawn against African-Americans stood firm and was staunchly upheld by commissioner Kenesaw Mountain Landis throughout his 23-"

omnivorousrex added this to a list 1 year, 2 months ago
Tribute...Black excellance (161 person items)

unicornsugar added this to a list 3 years, 1 month ago

unicornsugar added this to a list 3 years, 2 months ago
Famous Figures: The South (27 person items)