9
The Office
I love Jim + Pam so much. This show has the best I love you climax I have ever seen. I have never seen a comedy with such good acting. Michael is the picture perfect bigot who doesn't know he's a bigot.

8.6
The Newsroom (2012)
FANTASTIC.
Funny, intellectual, well acted, great characters, great chemistry between the characters...I have never felt such love for TV. The writing is perfect. I savor every episode. 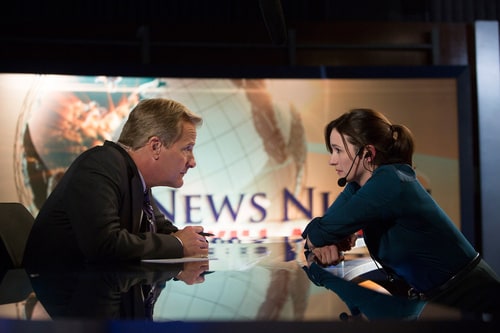 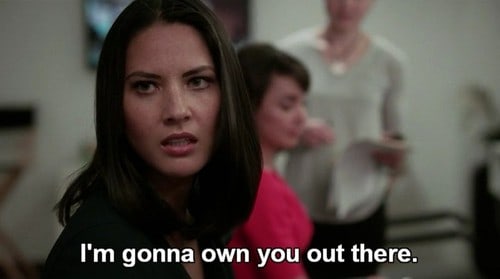 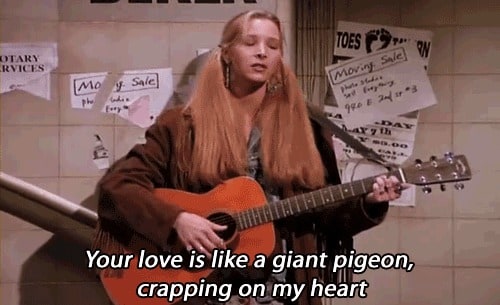 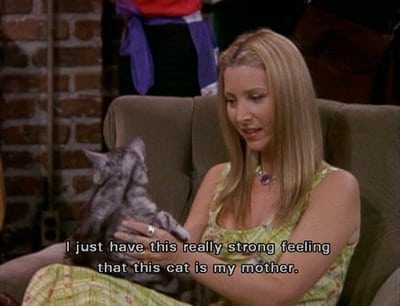 8.8
It's Always Sunny in Philadelphia
Some episodes are more funny than others but there are some really hilarious ones. Most of the ep.s are centered around some project they take up, ex) making a dumpster baby famous in order to better its future, giving a home make over to an unwilling family, finding out if they were really fed human meat, buying a p-diddyesque shrimping vessel, going on welfare etc. 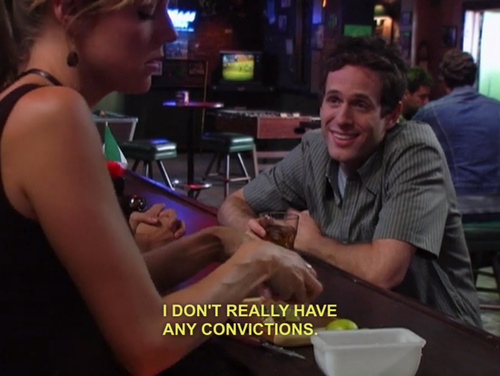 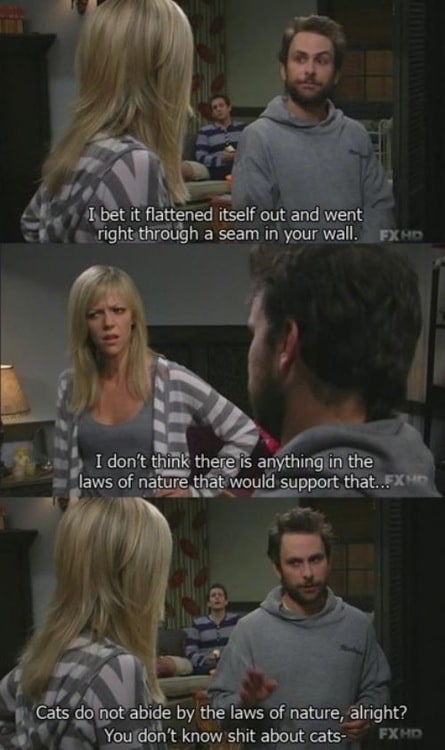 8.6
Parks and Recreation
Silly, silly me. Who wants to watch a show about parks? *face slap* Leslie Knope...how to describe Leslie Knope... She's basically a passionate, caring person in the world of Parks and Rec where everybody else wants to get by doing as little as possible, in a town that hates her for her efforts. I don't think I enjoyed season 1 as much as the other seasons, so give the show time to get into its gear. 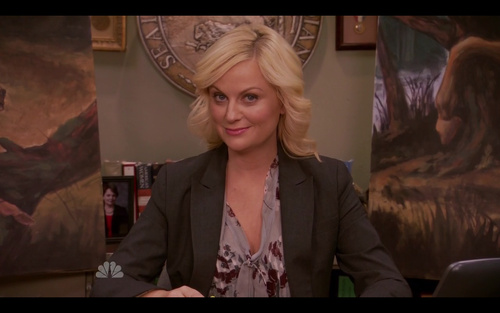 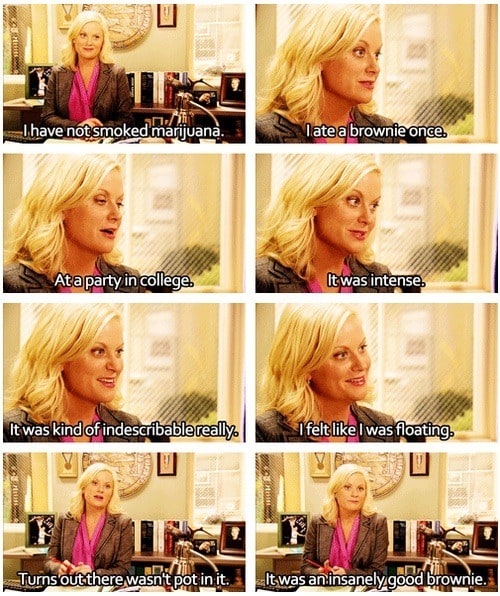 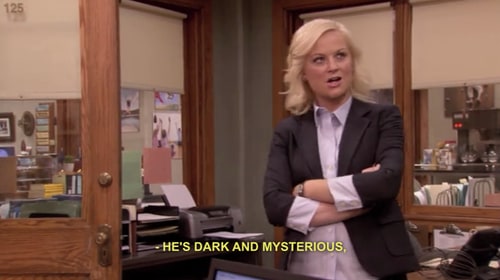 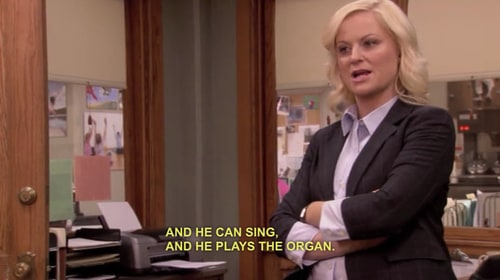 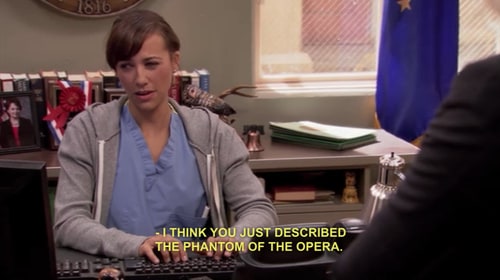 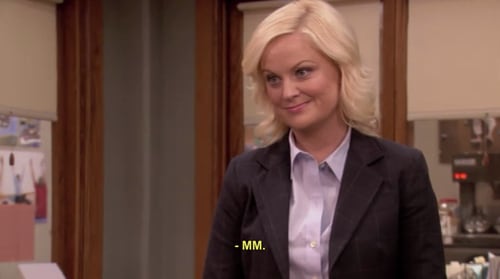 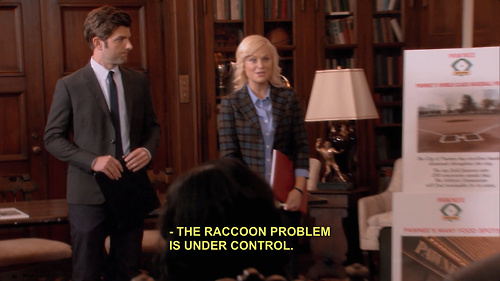 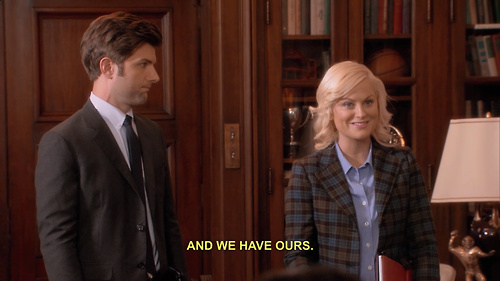 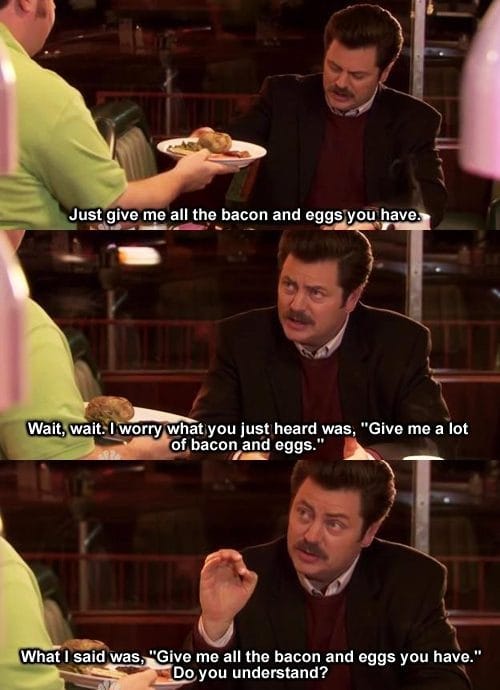 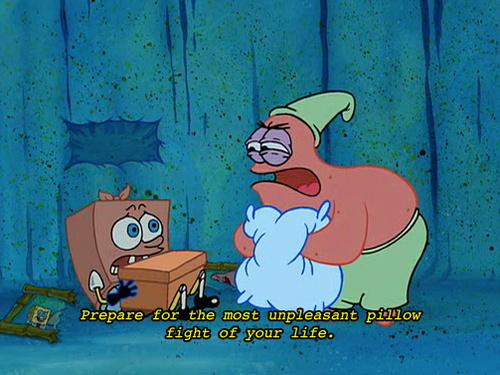 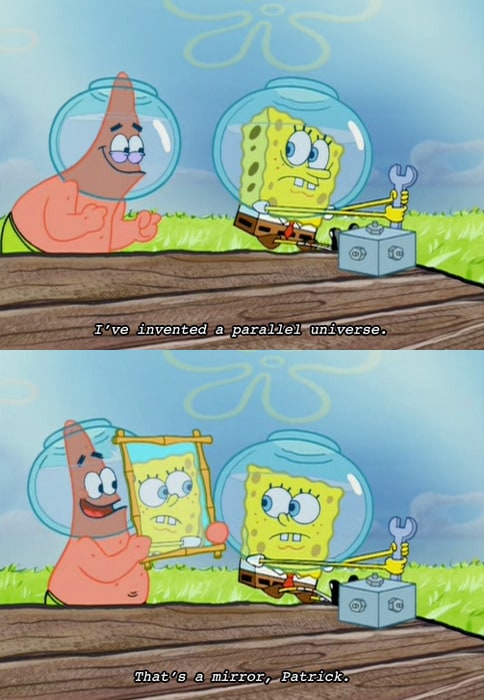 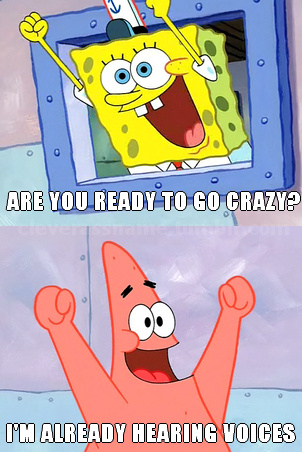 8.3
The Good Wife (2009)
I will do a lot of things to get my weird romantic fix. For instance, watching four seasons of The Good Wife in one week with exams around the corner. So while my focus and only care has admittedly been the romantic development, the later episodes have actually been pretty good with relatively little filler. I am really looking forward to the scenario they set up for the next season.
That being said, the character development on this show kind of sucks and has really irritated me at times. Alicia is the center of the show yet sometimes trying to understand her motivations is far more difficult than it should be. My reaction when I first started watching the show: I love the tone of this show. Don't know why it took me so long to watch it. But I really am annoyed with the fact that after NINE EPISODES of her staying beside a man, who is continuously painted as worse and worse, she stays with him and it is never EXPLAINED WHY EXPLICITLY- this is not something you leave up to suspense. This is a 9+ episode hole in the understanding of her character. There better be a cathartic explosion coming soon. (This lack of explanation for her motivations lasts way up into the fourth season.)
That being said,

9.3
Game of Thrones (2011)
I really love this show. My only problem with it are the whorehouse scenes- it just creates this awkwardness when I want to recommend the show. Why are they there? They contribute nothing to the story. They are literally just thrown in sex scenes. Oh, yeah, actually not my only problem, but in my mind the whole Dani + rapist love thing never actually happened and thus I cannot comment on it.
But no more complaining because it's an AWESOME SHOW. Great multi-faceted characters, great storyline, extremely entertaining. You will become emotionally invested in the characters, only to have the author kill them off...Uh yeah.
Oh, and a year interval between seasons? #$%^&@!!*()_YR#E#@#$%$%^. 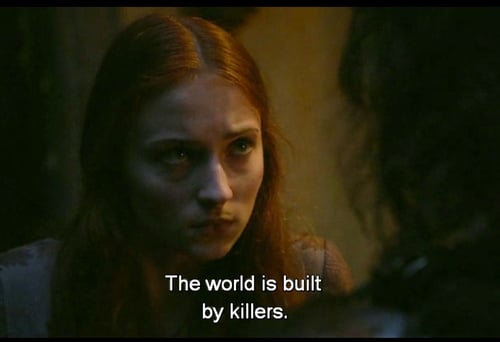 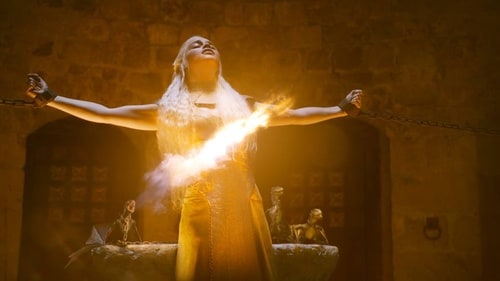 I loved Dani's storyline so much... But also Tyrion's, and Jaime's, and Jon's, and ooh hell yeah Arya better train to become a bad-ass assassin in the next season because that is what I want to see.

And Jorah + Dani. Just kill that other guy. Kill him off Martin, kill him off!

Sadly stopped watching around season 5 when rape became the show's favorite plot device and I was like nah. Maybe will go back and rewatch old seasons one day...

7.4
House of Lies
How to describe this show? It's got some pretty great, well-acted, and flawed characters. Though the comedy might be a bit 'cruder' than what I'm used to. I find it enjoyable that Marty can break the fourth wall, pause a scene and comedically explain the situation to the camera. Plus, it's a fucking travesty that 99% of popular characters on TV seem to be white-skinned. The show is special in the fact that its main character is African American with white-skinned costars. Marty is not a token black character. His race is not made invisible. Seriously, just take a moment while you're watching TV to ask yourself, Where the hell are the other ethnicities?
Don Cheadle talking about the show: 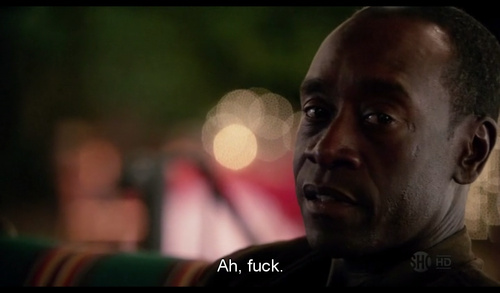 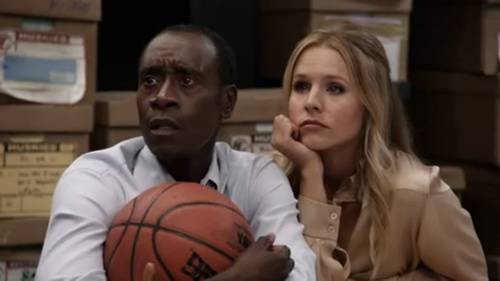 8.2
Buffy the Vampire Slayer (1997)
I was introduced to Buffy through the Season 7 DVD Set. Yep, I started this show from the last season and then went back in time, and it was wonderful. If you want to get into the show... I mean season 7 is really the best anyway-love, death, end of the world, hell mouth, singing...

8.2
The Killing (2011)
I like The Killing for a number of reasons- 1)The cops are a lot more realistic. It takes two seasons to solve the first murder and the grief of the loved ones is dealt with in a make-you-cry kind of way. It's not like those shows where the cops solve a murder successfully each episode and people are dropping like flies. 2)I love the characters. I love that Linden is a kick ass strong female character and that doesn't mean she's a skimpily-clothed-high-heel-wearing-femme-fatale but a flawed character who wears turtle neck sweaters and a frown engraved into her face and a haunted look in her eyes, who's also really good at her job.
That being said, I kind of got bored at the beginning of season 2 and stopped watching and then skipped onto season 3 which reboots with a new murder. I basically keep watching for the main characters, not the storyline.
Also, while rewatching this show with my brother, the presence of a second party kind of made the heavy, depressing violin score seem a bit more melodramatic than I first noticed. But that's the show's tone. It's definitely not going for comedy.
See: 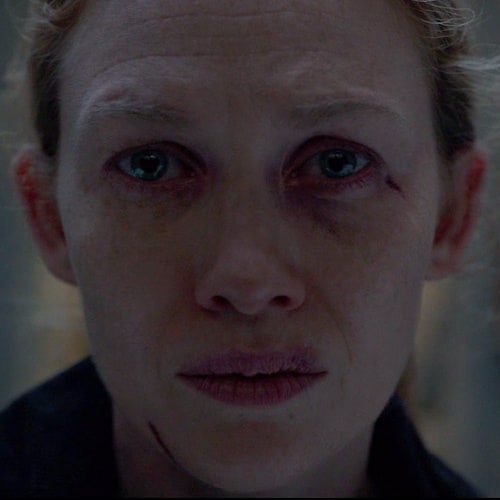 Now imagine, if she can make you feel so distressingly depressed with an image, what the characters can do on this show. 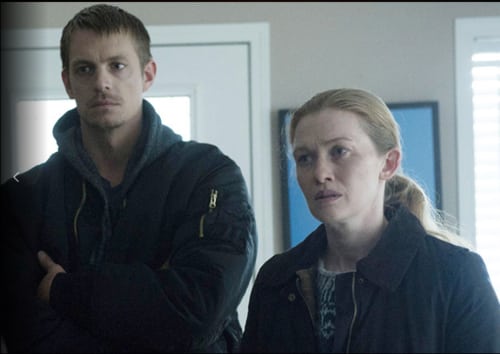 To be fair this is from a particularly low point in the characters' lives. It's not that depressing. Jeez.

8.5
Community (2009)
I couldn't get into the episodes I saw of season 1. Down the road when I was bored I started watching season 4 which was also not good but I grew to appreciate the characters so I skipped back to season 2. Season 2 is absolutely fantastic. Hilarious, clever and original. Episode after episode it brings its A-game. Absolutely recommend it.

8.4
My Mad, Fat Diary (2013)
2x1, 2x1, 2x1! Has some of the cliched rom com elements, but the way they deal with Rae + Finn's relationship is refreshing and honest and sweet. It's funny too. And deals with mental health and body issues. Breaks your heart. "..The worst thing though ,Tix, was that a lot of this stuff was so nice; it was so pretty and delicate. It just wasn't made for someone whose body wasn't pretty, wasn't delicate." Rae is extremely likable.

8.2
Looking (2014)
This show takes a while to get going and so far Johnathon Groff is the only main character who seems to be getting good stuff for some reason, but omg so good. 1x5 was excellent. Sweet, funny. Similar to the vibe of Weekend.
morningsong's rating:

8.1
You're the Worst (2014)
This is one of the best shows on TV. The writing is perfect. Literally perfect. I have no comprehension of why it isn't more popular.
morningsong's rating:

8.6
Mr. Robot
First episode was so good but idk feel like quality went down after.

7.8
Jane the Virgin (2014)
I feel like the writing got better in season 2, which considering how good it already was, is pretty rare for a show. Such excellence and Gina Rodriguez is an amazing actress. In a show that could easily be over the top soapy, she brings the humanity and sweetness. All the actors are wonderful really. Very well casted.
morningsong's rating:

My TV Shows by mojack

♫ My 50 Guilty Pleasure Songs ♫ by OsamaExKing

Watched In October 2013 by Hootsaidtheowl

Watched In Nov 2013 by Hootsaidtheowl

Life of a shipper by morningsong

My Favorite Books by morningsong