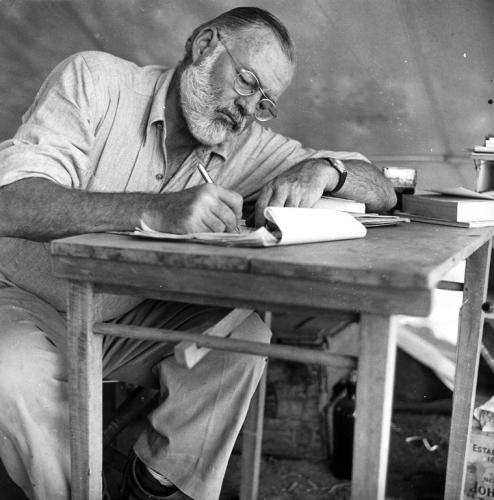 A Farewell to Arms is a 1932 American romance drama film directed by Frank Borzage and starring Helen Hayes, Gary Cooper, and Adolphe Menjou. Based on the 1929 semi-autobiographical novel A Farewell to Arms by Ernest Hemingway, with a screenplay by Oliver H.P. Garrett and Benjamin Glazer, the film is about a romantic love affair between an American ambulance driver and an English nurse in Italy during World War I. The film received Academy Awards for Best Cinematography and Best Sound, and was nominated for Best Picture and Best Art Direction. In 1960, the film entered the public domain (in the USA) due to the failure of the last claimant, United Artists, to renew its copyright registration in the 28th year after publication. The original Broadway play starred Glenn Anders and Elissa Landi. 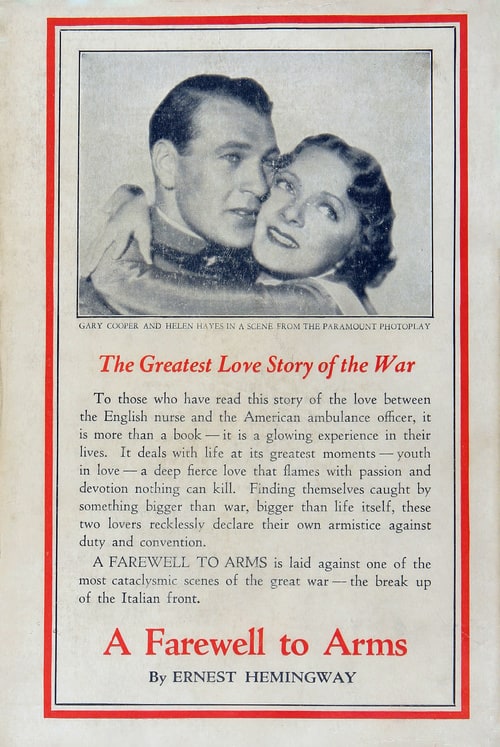 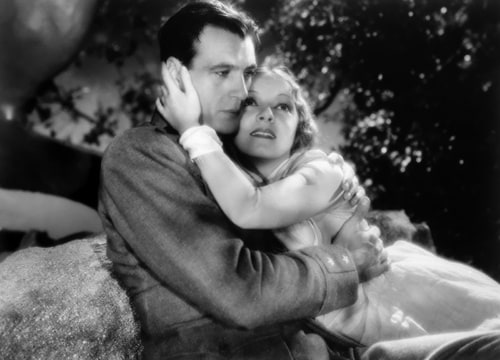 For Whom the Bell Tolls is a 1943 American film produced and directed by Sam Wood and starring Gary Cooper, Ingrid Bergman, Akim Tamiroff, and Joseph Calleia. Written by Dudley Nichols and based on the novel For Whom the Bell Tolls by Ernest Hemingway, the film is about an American fighting in the Spanish Civil War on the side of the Republicans who finds romance during a desperate mission to blow up a strategically important bridge.

For Whom the Bell Tolls was Ingrid Bergman's first Technicolor film. Hemingway handpicked Cooper and Bergman for their roles. The film became the top box-office hit of 1943, grossing $11 million. It was also nominated for nine Academy Awards, winning one. Victor Young's film soundtrack for the film was the first complete score from an American film to be issued on record. 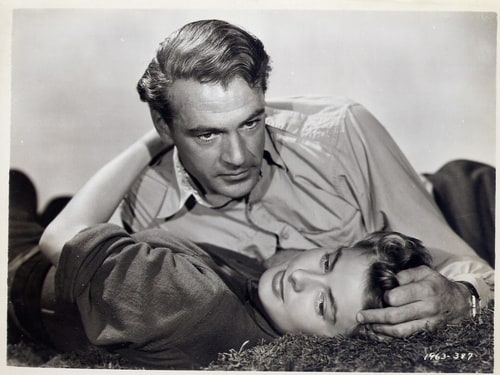 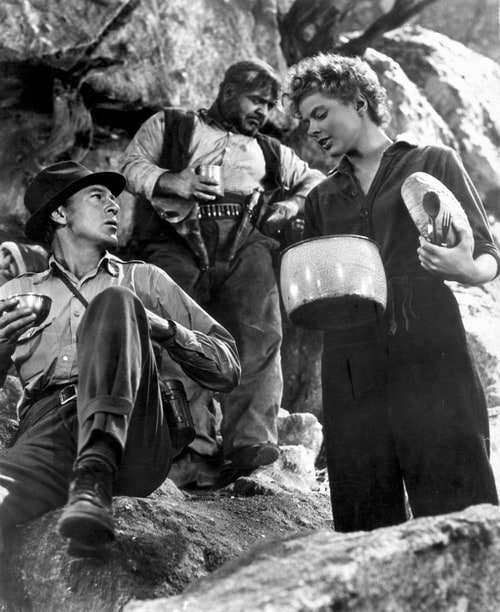 7.8
To Have and Have Not (1944)
To Have and Have Not is a 1944 American romance-war-adventure film[2][3] directed by Howard Hawks and starring Humphrey Bogart, Walter Brennan, and Lauren Bacall in her first film. Although it is nominally based on the novel of the same name by Ernest Hemingway, the story was extensively altered for the film. 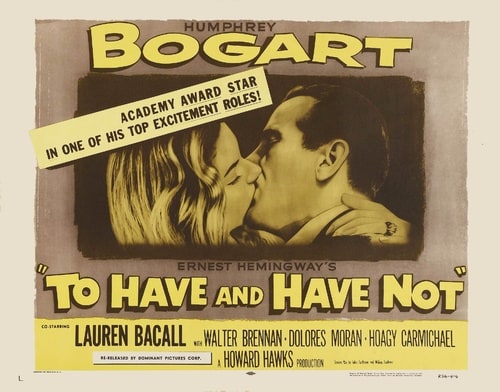 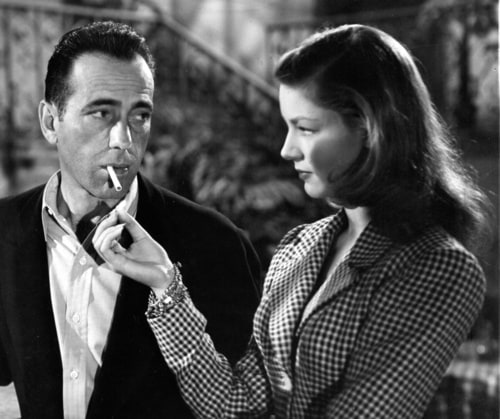 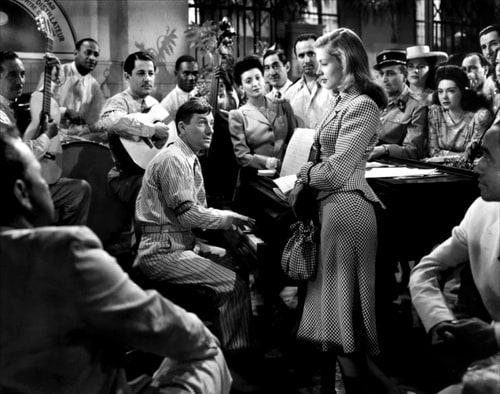 The Killers is a 1946 American film noir directed by Robert Siodmak and based in part on the short story of the same name by Ernest Hemingway. The film stars Burt Lancaster in his film debut, Ava Gardner, Edmond O'Brien, and Sam Levene. The film also features William Conrad in his first credited role, as one of the titular killers. An uncredited John Huston and Richard Brooks co-wrote the screenplay, which was credited to Anthony Veiller.

In 2008, The Killers was selected for preservation in the United States National Film Registry by the Library of Congress as being "culturally, historically, or aesthetically significant. 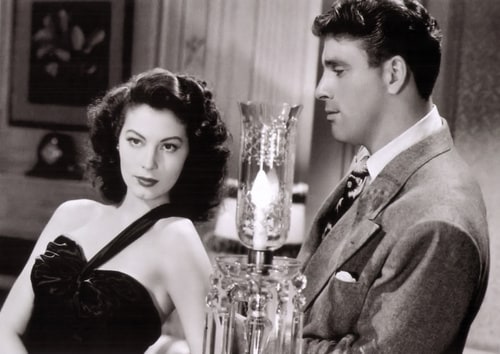 7.5
The Breaking Point (1950)
The Breaking Point is a 1950 American film noir directed by Michael Curtiz and the second film adaptation of the Ernest Hemingway novel To Have and Have Not.[1] It stars John Garfield (in his second to last film role) and Patricia Neal. 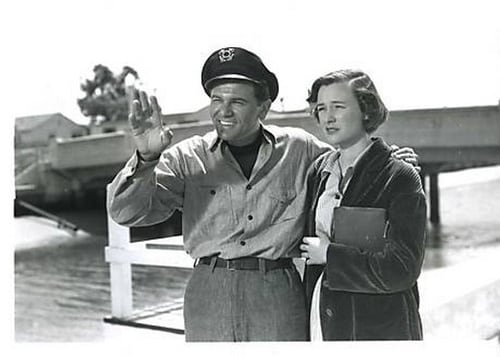 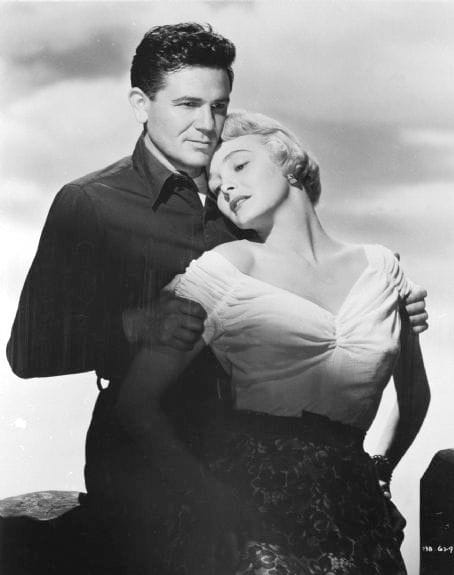 The Snows of Kilimanjaro is a 1952 American Technicolor film based on the short story of the same name by Ernest Hemingway. The film version of the short story was directed by Henry King, written by Casey Robinson, and starred Gregory Peck as Harry, Susan Hayward as Helen, and Ava Gardner as Cynthia Green (a character invented for the film). The film's ending does not mirror the book's ending.

Considered by Hemingway to be one of his finest stories, "The Snows of Kilimanjaro" was first published in Esquire magazine in 1936 and then republished in The Fifth Column and the First Forty-Nine Stories (1938).

The film has entered the public domain 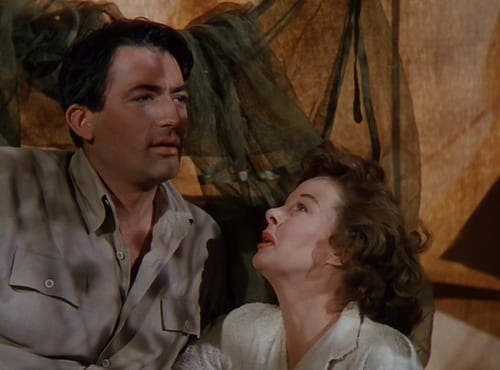 A Farewell to Arms is a 1957 American DeLuxe Color CinemaScope drama film directed by Charles Vidor. The screenplay by Ben Hecht, based in part on a 1930 play by Laurence Stallings, was the second feature film adaptation of Ernest Hemingway's 1929 semi-autobiographical novel of the same name. It was the last film produced by David O. Selznick. An earlier film version, A Farewell to Arms starred Gary Cooper and Helen Hayes. 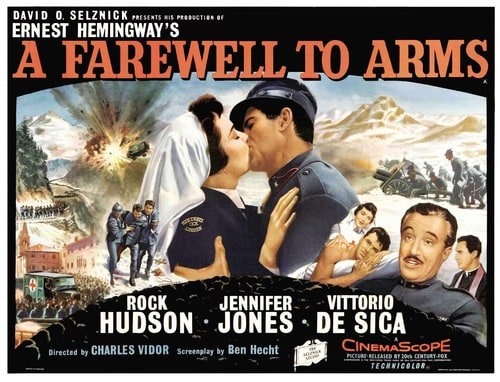 6.3
The Sun Also Rises
The Sun Also Rises is a 1957 film adaptation of the Ernest Hemingway novel of the same name directed by Henry King. The screenplay was written by Peter Viertel and it starred Tyrone Power, Ava Gardner, Mel Ferrer and Errol Flynn. Much of it was filmed on location in France and Spain in Cinemascope and color by Deluxe. A highlight of the film is the famous "running of the bulls" in Pamplona, Spain and two bullfights. 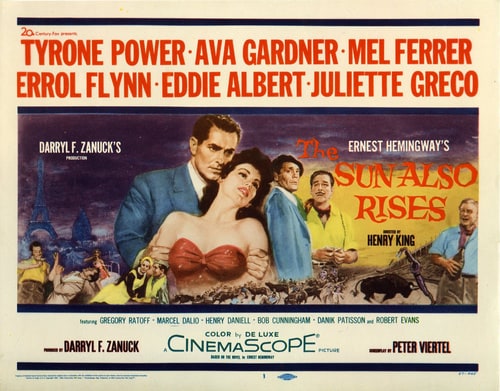 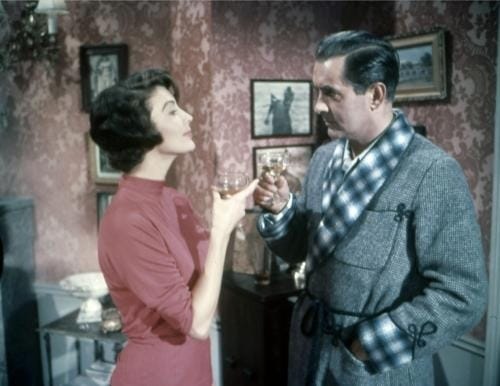 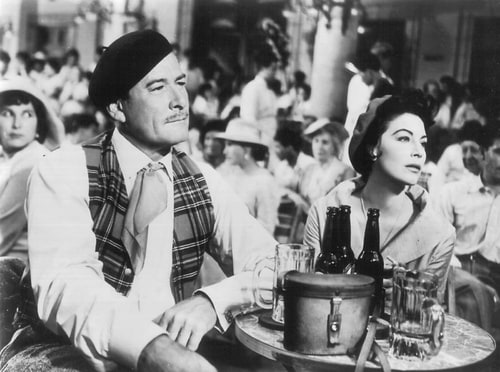 6.3
The Gun Runners (1958)
The Gun Runners, a 1958 film directed by Don Siegel, is the third adaptation of Ernest Hemingway's novel To Have and Have Not, starring Audie Murphy and Patricia Owens.[1] Everett Sloane essays the part of the alcoholic sidekick originally played by Walter Brennan in the film's first adaptation, although Sloane's interpretation is less overtly comic. Eddie Albert delivers a bravura performance as a charismatic villain; other cast members include Jack Elam and Richard Jaeckel. Gita Hall, "Miss Stockholm of 1953", made her film debut as Albert's girlfriend Eva.

The earlier remake, titled The Breaking Point (1950), was directed by Michael Curtiz and starred John Garfield 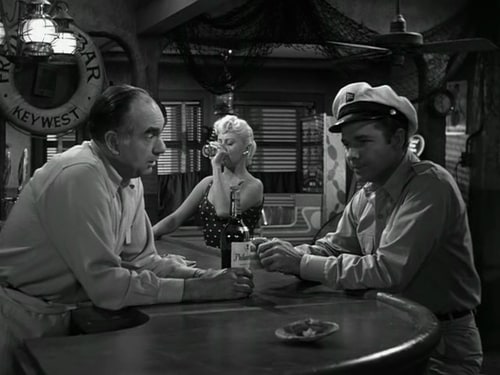 7
The Old Man and the Sea (1958)
The Old Man and the Sea is a Warnercolor 1958 film starring Spencer Tracy, in a portrayal for which he was nominated for a best actor Oscar. The screenplay (the "most literal, word-for-word rendition of a written story ever filmed"[1]) was adapted by Peter Viertel from the novella of the same name by Ernest Hemingway, and the film was directed by John Sturges. Sturges called it "technically the sloppiest picture I have ever made."[4 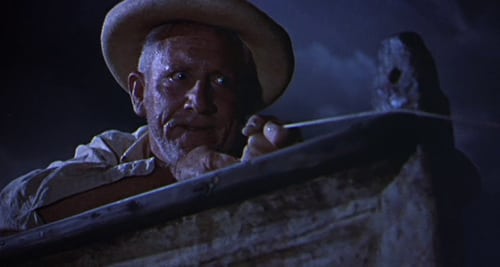 Islands in the Stream is a 1977 American drama film, an adaptation of Ernest Hemingway's novel of the same name. The film was directed by Franklin J. Schaffner and starred George C. Scott, Hart Bochner, Claire Bloom, Gilbert Roland, and David Hemmings.

5.3
The Garden of Eden (2008)
The Garden of Eden is the second posthumously released novel of Ernest Hemingway, published in 1986. Begun in 1946, Hemingway worked on the manuscript for the next 15 years, during which time he also wrote The Old Man and the Sea, The Dangerous Summer, A Moveable Feast, and Islands in the Stream. 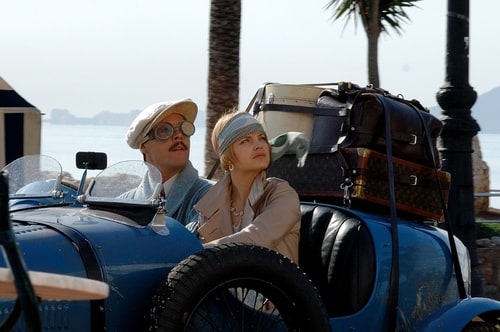 In Love and War is a 1996 romance drama film based on the book, Hemingway in Love and War by Henry S. Villard and James Nagel, starring Mackenzie Astin, Chris O'Donnell, Sandra Bullock, and Margot Steinberg. This film takes place during World War I, and is based on the World War I experiences of the writer Ernest Hemingway. It was directed by Richard Attenborough. The film was entered into the 47th Berlin International Film Festival.

This film is largely based on Ernest Hemingway's real experience in World War I as a young soldier in Italy. He was wounded and sent to military hospital where he shared a room with Villard (who authored the book the movie is based on) and they were nursed by Agnes von Kurowsky. Hemingway and von Kurowsky fell strongly in love but somehow the relationship didn't work out.

The film—apparently in a deliberate attempt to capture what the director called Hemingway's "emotional intensity"—takes liberties with the facts. In real life, unlike the movie, the relationship was probably never consummated, and the couple did not meet again after Hemingway left Italy.[2]

Hemingway, deeply affected by his romantic relationship with von Kurowsky, later wrote several stories about this romantic love relationship, including A Farewell to Arms.

From Wikipedia, the free Encyclopedia 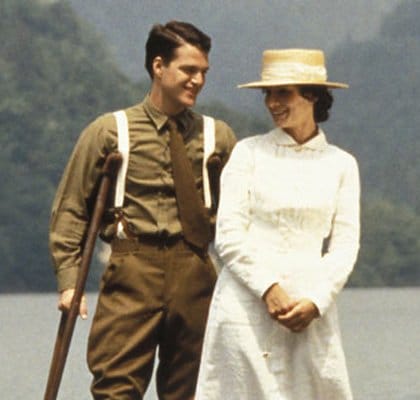 Ernest Miller Hemingway (July 21, 1899 – July 2, 1961) was an American author and journalist. His economical and understated style had a strong influence on 20th-century fiction, while his life of adventure and his public image influenced later generations. Hemingway produced most of his work between the mid-1920s and the mid-1950s, and won the Nobel Prize in Literature in 1954. He published seven novels, six short story collections, and two non-fiction works. Additional works, including three novels, four short story collections, and three non-fiction works, were published posthumously. Many of his works are considered classics of American literature.

Hemingway was raised in Oak Park, Illinois. After high school he reported for a few months for The Kansas City Star, before leaving for the Italian front to enlist with the World War I ambulance drivers. In 1918, he was seriously wounded and returned home. His wartime experiences formed the basis for his novel A Farewell to Arms (1929).

In 1921, he married Hadley Richardson, the first of his four wives. The couple moved to Paris, where he worked as a foreign correspondent and fell under the influence of the modernist writers and artists of the 1920s "Lost Generation" expatriate community. He published his first novel, The Sun Also Rises, in 1926. After his 1927 divorce from Hadley Richardson, Hemingway married Pauline Pfeiffer; they divorced after he returned from the Spanish Civil War where he had been a journalist, and after which he wrote For Whom the Bell Tolls (1940). Martha Gellhorn became his third wife in 1940; they separated when he met Mary Welsh in London during World War II. He was present at the Normandy landings and the liberation of Paris.

Shortly after the publication of The Old Man and the Sea (1952), Hemingway went on safari to Africa, where he was almost killed in two successive plane crashes that left him in pain or ill health for much of his remaining lifetime. Hemingway maintained permanent residences in Key West, Florida, (1930s) and Cuba (1940s and 1950s), and in 1959, he bought a house in Ketchum, Idaho, where he committed suicide in the summer of 1961.

Female friendships on movies by Venice

Favorite Images of Echidnas by kathy

Movies About Teacher and Students by Kandi

Card Games in Movies I by Kandi

Airplane Scenes I - Movies by Kandi