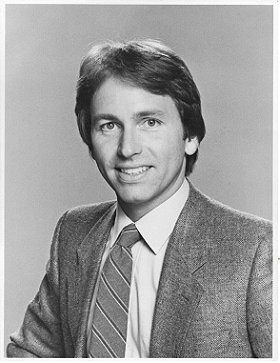 After graduation from high school, he attended the University of Southern California where he majored in Psychology and minored in Architecture. His first appearance on TV was in 1966 as a contestant on The Dating Game (1965) where he won a vacation to Lake Havasu, Arizona. After making his very first cameo appearance, he was induced to join an acting class taught by Nina Foch. He changed his major to Theater Arts, graduating in 1971 with a Bachelor of Fine Arts degree in Drama. He also studied acting with Stella Adler at the Harvey Lembeck Comedy Workshop. Between 1968 and 1969, he appeared in a series of stage plays in England, Scotland, Holland and in Germany.

His TV debut came playing a campus revolutionary on Dan August (1970) which starred Burt Reynolds and Norman Fell, who later starred with him on Three's Company (1976). Then he appeared as "Reverend Matthew Fordwick" on The Waltons (1971). He continued making more guest appearances on Medical Center (1969), M*A*S*H (1972), The Bob Newhart Show (1972), The Streets of San Francisco (1972), Kojak (1973), Rhoda (1974) and The Mary Tyler Moore Show (1970). While working on The Waltons (1971), he received word that his legendary father had passed away, just a day after New Year's Day in 1974. The following year, in late 1975, ABC picked up the rights for a new series based on a British sitcom, Man About the House (1973). Ritter beat out 50 people, including a young Billy Crystal, to get a major role. The first pilot was trashed, and in order for it to be improved, Joyce DeWitt, an unknown actress, played the role of "Janet Wood", along with Suze Lanier-Bramlett as the dumb blonde, "Chrissy Snow". It did better than the first pilot, but the producers still needed a change and Suzanne Somers came to the show at the very last minute to play "Chrissy". The series, Three's Company (1976), was born. When it debuted as a mid-season replacement, it became a ratings hit. It focused mainly on his character, "Jack Tripper", a chef who pretended to be gay in order to share an apartment with two attractive ladies.

Before playing "Jack Tripper" on the small screen, he also made his box office debut in the movie Nickelodeon (1976). Two years later, he worked with his close friend, Jenny Sullivan, in Breakfast in Bed (1977), and the following year, played "Pres. Chet Roosevelt" in the movie Americathon (1979). Also in 1977, he and his brother emceed the Annual United Cerebral Palsy Telethon which he continued to support for over 15 years. He also became more popular with movies such as Hero at Large (1980) and They All Laughed (1981). In 1980, when Three's Company (1976) was sold into syndication, the show became a ratings phenomenon. At the height of Ritter's popularity, he won a Golden Globe in 1983 for Best Performance by an Actor after being nominated twice for Best TV Actor in a Musical-Comedy Series and, one year later, he won an Emmy for Outstanding Lead Actor In a Comedy Series after being nominated twice. By its eighth season, the show began to drop in the ratings and was canceled in 1984. After cancellation, he starred in its spin-off, called Three's a Crowd (1984), also starring Mary Cadorette, but it lasted for only one season.

His first animated movie was that of a man turning into a dragon, whose job was to defeat "Ommendon" in The Flight of Dragons (1982). The following year, he came back to series television as "Detective Harry Hooperman" in the comedy/drama, Hooperman (1987) for which he was nominated for both an Emmy and a Golden Globe in 1988 for Outstanding Lead Actor in a Comedy Series. He also won a People's Choice Award for this role. He continued doing more box-office films such as Skin Deep (1989), in which he played a womanizing, alcoholic writer whose life seemed to be falling apart at the seams. In the movies, Problem Child (1990), and Problem Child 2 (1991), he played the surrogate father of a rebellious little boy who wrought havoc on the family. He also worked on Noises Off... (1992) and Stay Tuned (1992) before returning to another TV sitcom called Hearts Afire (1992) that also starred Billy Bob Thornton. The show had well-written scripts but failed to reach a massive audience which led to its cancellation in 1995. While he was working on Hearts Afire (1992), he played "Ward Nelson" on North (1994). Then, he had the opportunity to work with Billy Bob Thornton, in the movie Sling Blade (1996), in which Ritter played the gay manager of a department store. He also provided the voice of "Clifford" in Clifford the Big Red Dog (2000). He was nominated for a Daytime Emmy Award 4 times in a row, totaling seven Emmy nominations in his 35-year career. In 1999, he was also nominated for an Outstanding Guest Actor in a Comedy Series playing the role of "George Madison" on an episode of Ally McBeal (1997).

Soon afterwards, he landed his last television role in 8 Simple Rules (2002), based on the popular book. On this sitcom he played "Paul Hennessey", a loving, yet rational dad, who laid down the ground rules for his three children and dealt with such topics as curfews, sex, drugs, getting arrested, etc. The show was a ratings winner in its first season and won a People's Choice Award for Best New Comedy and also won for Favorite Comedy Series by the Family Awards. While working on "8 Simple Rules", he also starred in his second-to-last film, Manhood (2003). That same year, he felt ill while rehearsing on set, and was taken across the street to Providence St. Joseph Medical Center in Burbank, California, where he was mistakenly treated for a heart attack. He died from an undiagnosed aortic dissection which is a tear in the wall of the aorta. He underwent surgery and died on September 11, 2003, just six days shy of his 55th birthday. In the years that he worked, John Ritter was a brilliant comedian and a passionate actor, who wanted to make everybody laugh. Shortly before his death, his eldest son, Jason Ritter, was cast in the role of "Kevin" in the highly-rated drama Joan of Arcadia (2003). ... (more) (less)
Tags: Actor (13), American (8), Died 2003 (5), Born 1948 (5), Three's Company (3), Comedian (2), Sling Blade (2), Jack Tripper (2), Died Aged 54 (2), Deceased (2), Tv Star (2), Problem Child (1), Aortic Dissection (1), Comedy Legend (1), King Of The Hill (1), Male (1), Captain Avenger (1)
My tags:

Dagobert added this to a list 1 year, 2 months ago

Shaun voted for an image 2 years, 6 months ago

cekadidas added this to a list 3 years, 8 months ago
Favorite Celebrities (Dead or Alive) (764 person items)

SwtChaos added this to a list 6 years, 2 months ago

Leo added this to a list 6 years, 2 months ago