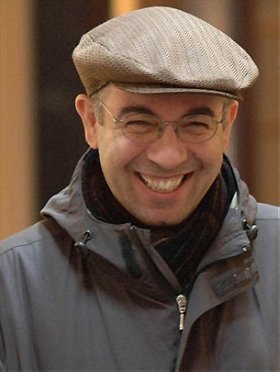 21 votes
Directors and composers who work together (63 items)
list by Venice
Published 6 years, 9 months ago

Tornatore was born on May 27, 1956 in Bagheria, a small town outside Palermo in Sicily. At the age of sixteen, while still a student at the local liceo, he directed two stage works: Luigi Pirandello's Bella Vita and L'Arte della Commedia by Edoardo De Filippo. That same year he made a short film entitled Il Carretto (The Wagon) which brought him to the attention of RAI television, with which he began a close collaboration in 1979. Several TV films followed in rapid succession: Portrait of a Thief, Meeting with Francesco Rosi, Sicilian Writers and Films: Giovanni Verga, Luigi Pirandello, Vitaliano Brancati, Leonardo Sciascia, and Guttuso's Diary. In 1982, Tornatore won a prize for Best Documentary at the Salerno Film Festival for Ethnic Minorities in Sicily.

Tornatore made his feature film debut with an adaptation of Giuseppe Marazzo's novel Il Camorrista, about an Italian journalist's valiant struggle against the mob, starring Ben Gazzara and Laura del Sol. The film won that year's Nastro d'Argento (Silver Film Award) and the Italian Golden Globe for the Best Young Director.

One person who perceived the bright promise behind Tornatore's first film was Franco Cristaldi - producer of some of Fellini's more memorable films. He encouraged Tornatore, inquiring about his other projects. Ultimately, this led to their collaboration on what was to be Tornatore's second, and breakthrough, feature, CINEMA PARADISO. It also marked the first time Ennio Morricone did the score for a Tornatore film - a collaboration which has continued to this day.

The film went on to win the Special Jury Prize at the Cannes Festival in 1989, the Golden Globe awarded by the foreign press in Hollywood in 1989, and the Academy Award for Best Foreign Picture in 1990. It also won a special prize at the Felix awards, the 1991 BAFTA prize, and become an international success.

Tornatore's third feature, Everybody's Fine, which the director defined as a road movie-bittersweet comedy-thriller starred Marcello Mastroianni, Michele Morgan and Salvatore Cascio. It won the OCIC Award at the 1990 Cannes Film Festival as well as a Silver Ribbon in Italy for the best original story.

Starting in 1990, Tornatore became one of the founding members of the Philip Morris Cinema Project, dedicated to the restoration of classics of Italian cinema. Over the following years he participated in restoration work on such films as Luchino Visconti's La Terra Trema, De Sica's Shoeshine, Alberto Lattuada's Il Cappotto and Mauro Bolognini's Il Bell'Antonio. They also restored more than a dozen rare short films - all in danger of extinction - by such directorial greats as Antonioni, Comencini, Olmi, Petri, Pontecorvo, Dino Risi, Vancini, Visconti, Zurlini.

The following year, 1991, Tornatore was back behind the camera for the Blue Dog segment of the anthology film Especially on Sunday. Also in 1991, he founded a production company in Rome (Sciarlo) with his older brother Francesco, producing several Italian features.

During the academic year 1992-93, Tornatore gave a course in Aesthetics at the University of Palermo, taking time out to make a commemorative television program to mark the first anniversary of the killing of the anti-Mafia judge Giovanni Falcone.

That same year, directing for his own company Sciarlo and for Istituto Luce, he made a film anthology entitled Lo Schermo a Tre Punte, a compilation of cinematic references to Sicily . It was warmly received in the Finestra sulle Immagini section of that year's (52nd) Venice Film Festival. Tornatore further won acclaim with The Legend of 1900, a fable about a piano player who lived his entire life on the sea, starring Tim Roth. In 1998, Tornatore was made a Commendatore of the Italian Republic (one of Italy's highest awards) for his contribution to cinema. He most recently directed Malena, another magical story about the power of fantasy and the perils of growing up. ... (more) (less)
Tags: Italian (4), Writer (3), Producer (3), Director (3), Italia (2), Hot (2), Italy (2), Cute (2), Editor (2), Songwriter (2), Handsome (2), Italiano (2), Born 1956 (2), Second Unit Director (2), Sicilian (1), Doable (1)
My tags:

5. Armani Privé - A view beyond (2019)
View all Giuseppe Tornatore movies

Leo added this to a list 2 years, 6 months ago

Nominated for DGA But Not Oscar (28 person items)

Beroofficial added this to a list 5 years, 6 months ago