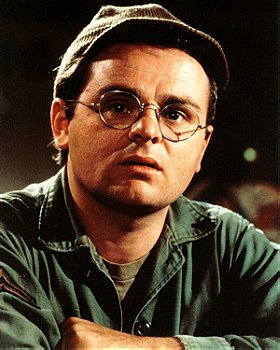 Burghoff was born in Bristol, Connecticut. He studied tap dance and became a proficient drummer, despite having a congenital deformity of three fingers on his left hand. In 1967 he originated the role of Charlie Brown in the original Off-Broadway production of You're a Good Man, Charlie Brown. He was the drummer for a band called the Relatives in 1968. Actress Lynda Carter was the band's singer. The group opened at the Sahara Hotel and Casino lounge in Las Vegas, Nevada and played there for three months. He and Carter remained friends, and she helped cast him in an episode of her later hit series The New Adventures of Wonder Woman, in the 1978 episode "The Man Who Wouldn't Tell".

Although several actors from the original MASH film made guest appearances in the television series, Burghoff was the only actor cast as a regular, continuing in the role of Radar O'Reilly. He left M*A*S*H after the seventh season because of burnout and a desire to spend more time with his family, though he returned the following year to film a special two-part farewell episode, "Goodbye Radar." Mike Farrell tried to persuade Burghoff to stay on the show, citing the lacklustre careers of former M*A*S*H regulars Larry Linville and McLean Stevenson after their departures. Burghoff was nominated for six Emmy Awards for the show in the category of Outstanding Supporting Actor in a Comedy Series and, of those nominations, he won an Emmy in 1977.
Covering the conclusion of M*A*S*H for TV Guide in 1983, Burt Prelutsky wrote, "Although nobody wanted to be quoted for the record, the feelings about Gary Burghoff's leaving were fairly unanimous: loved Radar, hated Burghoff. As summed up by one of the principals: 'Gary had personality problems. He always felt there was a conspiracy against him. He was rude to everyone, but if anyone ever said anything back to him, he'd throw a tantrum. He had frequent spats with his cast members, particularly with Alan Alda. Once his other cast member, Mike Farrell told him that his problem was that he could dish it out but he couldn't take it, and Gary said, "And I'm getting real sick and tired of dishing it out." The poor guy didn't even realize what he'd said.' ... (more) (less)
Tags: American (1), Actor (1), Film Actor (1), Tv Actor (1), Born 1943 (1), Still Living (1), M*A*S*H (1)
My tags: